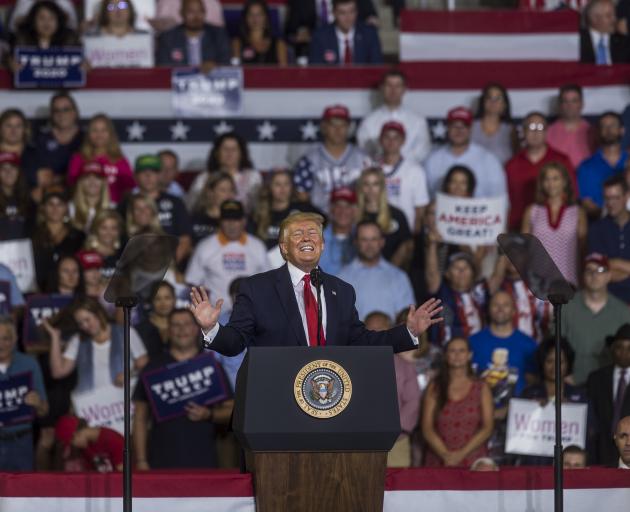 Trump grins during a rally in North Carolina in which his supporters chanted "send her back", mimicking the president's recent tweets. Photo: Getty Images
We in New Zealand care about what happens in the United States, the most powerful nation on the planet and the primary standard bearer for democracy. For all its many flaws, the giant US is "great". For all its injustices, it is - relatively speaking - the land of the free.

It is true, too, that its opportunities draw immigrants in search of "green cards" and work and eventually citizenship. Other parts of the world have worse poverty, more corruption, much lower standards of living. Some are even more "crime infested".

But how could the United States elect someone as repulsive as President Donald Trump? How could his re-election loom as a real possibility?

Just when it seemed Donald Trump tweets and utterances could go no lower and could not be more racist, he tells four Congresswomen they should go back to where they came from.

Each are, as the Americans put it, women of "colour". Three of the four were actually born in the United States and the other has lived there most of her life. Not that those facts should actually matter. Even if they had immigrated more recently, they are citizens elected to play their part in governing the country. Part of that is questioning the United States and seeking improvements.

If that was not sickening enough, a crowd of Trump faithful in North Carolina, when the president was listing the grievances of one of the four (from Minnesota), began chanting "send her back".

Mr Trump later said he was not happy with the chant. But at the time he did nothing to stop it, instead pausing for several seconds and appearing to approve.

This has obvious echoes, albeit worse, with the last election and the Trump chant of "lock her up". Mr Trump was referring to Democrat candidate "crooked" Hillary Clinton. It was irrelevant that Mrs Clinton, for all her faults, was arrow straight compared to her counterpart.

Mobs can be nasty in person or, these days, on the internet. Of course, the Right does not have sole mortgage on such contemptible behaviour. The righteousness of the Left can also trample on civil discourse and brand and label.

The United States is a polyglot nation of descendants of immigrants, immigrants themselves and some native peoples. The president himself has German ancestry, his paternal grandparents, and his mother is from the Scottish island of Lewis. Many in the US would, no doubt, like to "send him back".

Accusations of "racism" easily can be used to dismiss the person rather than the argument. Respectful discussions in areas of race, ethnicity and culture can be shut down with no room for questioning, and that is unhealthy.

Donald Trump, though, has a long and frequent history of negatively stereotyping of racial, national or religious groups. The "racism" cap fits all too snugly on his head.

An additional fear is that, on this occasion, the slurs were not just instinctive but cynical political calculation. Not only might his words appeal to both latent and manifest racism, but it identifies the Democratic Party with its left wing. It raises the American paranoia about even a whiff of "socialism" and could scare many middle Americans towards the Republicans.

The Democrats had to back their maligned party sisters even if that is what Mr Trump was after. But it will be up to the party, including the activists, to keep their appeal broad if they are to keep Mr Trump from another term.

The president's low cunning should not be underestimated, nor, too, should the effect of a prosperous economy on voter choices - even as Mr Trump does his best to undermine long-term economic health.

With each week, the clear evidence of Mr Trump exploiting division and the basest of human instincts grows. Decent Republicans and decent Americans must repudiate his character and behaviour both now and for the presidential election next year.

Like it is, is Racist. Awake, or sleeping, racist. Is racism the answer? How do you know?

If the countries were so great and nice the people would not run from them........ why should our countries become like theres . that they run from. this is what trump is all about..... he is not a racist he is a realist

This sickeningly leftist article appears to be indicative of the political leaning of many NZers and the media at least for the time being. How sad.