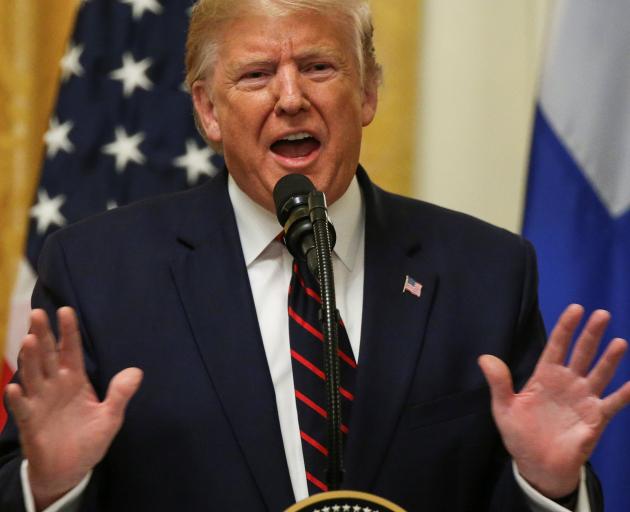 US President Donald Trump speaks at a conference at the White House this week. Photo: Reuters
Those who have become used to the another-day-another-drama style of Donald Trump's presidency will scarcely have blinked over the recent announcement of the impeachment inquiry.

As the third anniversary of his election looms, the President of the United States is in full victim mode, tweeting up a storm and showing he should have paid more attention in grammar and punctuation lessons. He is coming to the conclusion that what is taking place is not an impeachment, it is a COUP, intended to take away the Power of the People, their VOTE, their Freedoms, their Second Amendment, Religion, Military, Border Wall, and their God-given rights as a Citizen of The United States of America!''

Calls for the impeachment of the Donald are not new and gained more urgency when Democrats took control of the House of Representatives last November. However, up until now, the speaker Nancy Pelosi had resisted moves to begin impeachment proceedings.

That all changed on September 24 when Ms Pelosi announced the official impeachment inquiry, triggered by the issues around the now infamous (perfect, according to Mr Trump) call to the President of the Ukraine, Volodymyr Zelensky. Ms Pelosi said Mr Trump had admitted asking Mr Zelensky to take actions for his own political benefit.

Bluntly, the allegations are that Mr Trump was using the power of the presidency to delay military aid while pressuring the Ukraine president to dig some dirt on former vice-president Joe Biden's son. Mr Biden is seeking the Democrat presidential nomination for the election next year.

The whistle-blower in the mix alleges, in a nine-page document, that White House officials, once they realised the seriousness of the conversation with Mr Zelensky, tried to cover up by changing the classification of the call transcript from secret to top-secret, ensuring it would be stored where few people would have permission to read it.

Ms Pelosi has indicated the six congressional committees already investigating potential impeachable offences will continue this work. When their findings are known and if articles of impeachment are drafted, the House of Representatives will have to vote on them. If that is successful, the matter will proceed to the Senate for a trial.

The trouble is, the Senate has a Republican majority and, to get the two-thirds majority required to remove the president from office, about 20 Republican senators would need to cross the floor.

It is not known yet how long this process will take to complete.

It is a big gamble for the Democrats and one which could easily backfire, but one Ms Pelosi obviously thought she could no longer avoid.

In the meantime, the chasm between those who think Mr Trump is a madman and those who see him as a martyr will be getting wider.

In the midst of the uncertainty, one thing is sure. With Mr Trump already ramping up the rhetoric, including references to low-lifes, hoaxes, witch-hunts and comparisons with the civil war, we can expect much ugliness in the weeks ahead.

Impeachment must be tested, to redeem America's moral compass.

If the masses are riled, put the National Guard on the streets.

Three years of Russia hoax misdirection, and now this. Without fake new, there would be no news.

Trump has not asked foreign countries to investigate Ameri an citizens connected with the next election, or, he has, but it is no longer against the law. Or, it is still illegal but you and Trump supporters don't care.

I'm hearing gurgling sounds, as the plug that created the swamp starts to move.
Corruption, nepotism, elitism, are the hallmarks of the now far left Democrats.
Add to that the meddling of the CIA, which has a disgusting record worldwide, as well as a media that refuses to hold one side accountable but is more than happy to stick it to the other and the picture becomes clear.
The Democrats are not just scared that they will lose 2020, they scared that they are going to jail.