US swelters in record heat 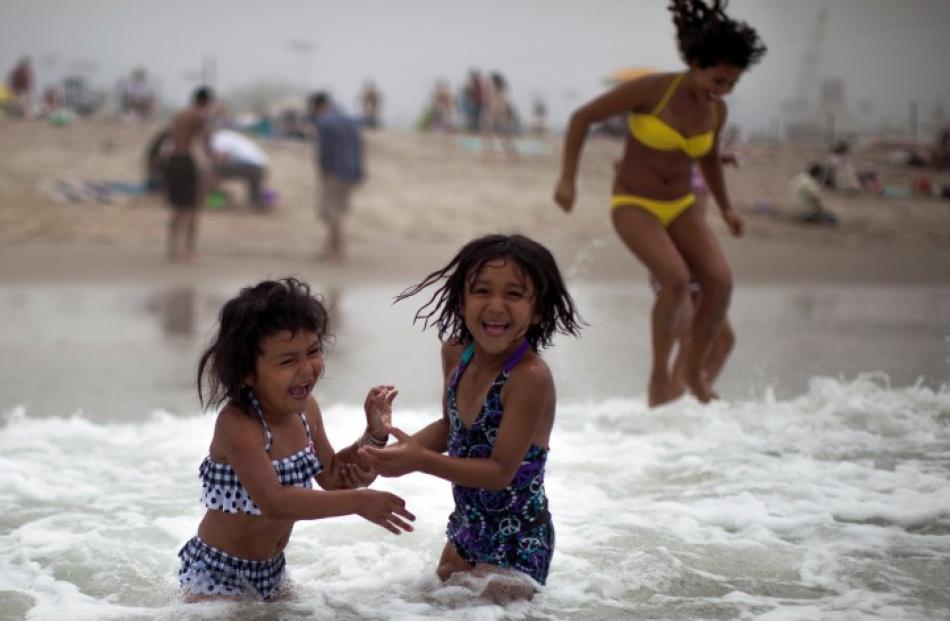 Celeste Hidalgo (7, R) and Alana Griego (5) cool off in the Pacific Ocean in Santa Monica, California, as a heat wave hits the west coast of the US. REUTERS/Lucy Nicholson

Dozens of people have been treated for heat-related ailments, and cities and towns across the western United States took emergency measures to help residents cool off, as the region sweltered in dangerous triple-digit temperatures.

At least one heat-related death was reported by authorities in Las Vegas, where a man in his 80s was found dead inside a house that had no air-conditioning.

The victim suffered from other medical issues, but paramedics suspect heat was a contributing factor in his death, Las Vegas Fire and Rescue spokesman Tim Szymanski said.

"It's not unusual for people with medical conditions, their problems worsen when it gets really hot," he said.

"It involves pretty much the entire West Coast at this point," Lericos said, adding that the stifling conditions, which began in some areas on Thursday afternoon, would likely continue through the weekend and linger into next week.

Triple-digit temperatures extended as far east as Texas, with Corpus Christi shattering its all-time high with a reading of 107 Fahrenheit (42 Celsius). In Utah, Salt Lake City hit 105F (41C) at the airport, a record high for the date.

At an outdoor concert in Las Vegas on Friday, 34 people were taken to the hospital after succumbing to the heat, and another 170 suffered nausea and fatigue.

An elderly man who been driving through Las Vegas with no air-conditioning was found suffering from heat stroke and was hospitalized in serious condition after he pulled off a highway and called for help, Szymanski said.

Precautions were taken for athletes and animals alike.

The annual Running with the Devil Marathon scheduled for Saturday in the Mojave Desert outside of Las Vegas, a competition in which runners are deliberately "challenged to contend with high heat," was canceled.

Tigers at the Phoenix Zoo were fed frozen trout, the monkeys were getting frozen yogurt to eat, and lions and other animals were lounging on artificial rocks and slabs of concrete cooled by piped water, said Linda Hardwick, a zoo spokeswoman.

In California, Nevada and Arizona, air-conditioned "cooling centers" were set up in community centers, homeless shelters and libraries, and officials warned residents to avoid prolonged exposure to the searing temperatures.

Prompted by concerns that migrants trying to cross into the United States from Mexico would die in the desert, additional border agents were posted on the U.S. side, said Brent Cagen, a spokesman for the Tucson sector of the U.S. Border Patrol.

At least three people, maybe more, who attempted to illegally cross the border into Arizona were found dead earlier this week, likely succumbing to the heat, Cagen said.

The scorching temperatures can cause potentially fatal heat stroke, and officials said people with no air-conditioning or who must work outdoors were particularly at risk.

Las Vegas on Saturday flirted with its all-time record of 117F (47C), as the mercury rose to 114F (46C) at the airport, said D.J. Hoffman, a meteorologist for private forecaster AccuWeather.com.

Record highs for the day fell in dozens of cities across the West, from Palm Springs to Oakland in California and on up the West Coast to Medford, Oregon.

The weather was forecast to remain hot on Sunday, with highs expected to reach 116F (47C) in Phoenix and 110F (43C) in Tucson, Arizona, Hoffman said.

"If people are used to the heat out West, this is a bit abnormal for them and even if they are used to it, it's still very dangerous," he said.

In Phoenix, emergency shelters are temporarily adding 150 beds in an effort to safeguard hundreds of homeless.

"Phoenix is a major city with a lot of concrete that tends to hold a lot of that heat in, so it's just like you're in a dry sauna," said Irene Agustin of the Central Arizona Shelter Services non-profit in Phoenix.

Officials in Clark County, Nevada, which includes Las Vegas, said they have installed 13 air-conditioned areas in community centers and homeless shelters, though the majority of them would be closed on Sunday. In 2005, roughly 17 people died during a similar heat wave over a 10-day period in the Las Vegas area.

Firefighters worry about dry conditions, which have ignited several major brush fires across the region recently, and about more blazes ignited by wayward fireworks launched from backyards to commemorate the Fourth of July holiday on Thursday.

Dan Kail, 67, was on vacation in sweltering Las Vegas when he heard about even higher temperatures in California's Death Valley.

He hopped in a rental car and made the 2-1/2 hour drive, yearning to feel air that he later described as a "blast furnace."

"I've never experienced that kind of heat," said Kail, who owns parking lots in Pittsburgh. "It almost burns you as it blows by you. It's amazing."

Death Valley posted a high on Saturday of 124F (51C), the National Weather Service reported. That's below the all-time world record of 134F (57C) set there on July 10, 1913, according to the National Park Service.