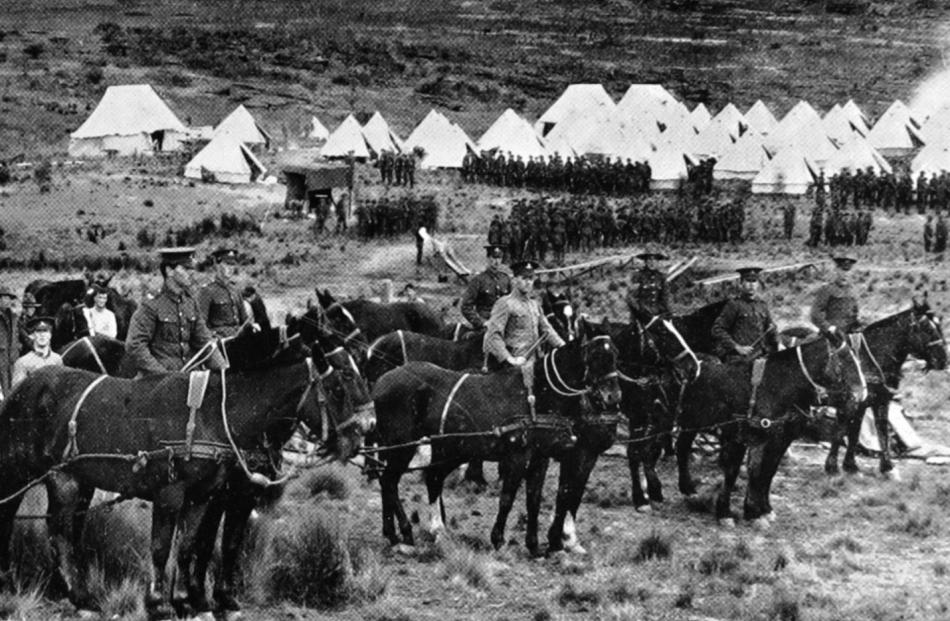 The horses and men of the R.N.Z. Artillery cadre that carried out the transport services at the Otago Infantry Brigade camp at Sutton this month. - Otago Witness, 23.4.1913. Copies of picture available from ODT front office, Lower Stuart St, or www...

Arrangements have been made for 4000 Chinese coolies to leave Canton for Samoa.

They are intended for work on the plantations in German Samoa - that is, on the islands of Upolu and Savaii. Most of them will, of course, go to Upolu, which is the richest of the Samoan islands, and which contains the German capital, Apia.

Chinese labour has been used in German Samoa for a considerable time and has been found to give every satisfaction. The coolies are indentured for a fixed period, at the end of which time they can either return to China or further engage themselves. Many of them prefer to remain in the islands. It is well known that the Samoan, like the natives of other South Sea Islands, is a lazy man in his own country.

There is no necessity for him to work, seeing that Nature supplies him with all that he requires. Much of the land is held by the Samoan chiefs, but they do not put it to the best use. The cocoanuts growing on it are ample to provide them with all the luxuries they require.

But copra is a big item with German and other planters and traders in Samoa, and since the introduction of Chinese labour the output has greatly increased. Besides cocoanuts, cacao is extensively grown, and latterly a lot of the land has been planted with rubber.

• Speaking of the solitary return to his Antarctic base of Dr Douglas Mawson, after losing his two comrades, Lieutenant Ninnis and Dr Mertz, Sir Ernest Shackleton is reported by the Daily Mail as saying:- ''A portion of the press in speaking of the Mawson Antarctic Expedition calls it the Mawson Antarctic tragedy. Undoubtedly, the deaths of Lieutenant Ninnis and Dr Mertz are sad, but they were the outcome of accidents which come in the ordinary course in all Polar exploration. Apart from these two accidents the expedition seems to me to have been a particularly brilliant one.

''When the story comes to be written of Mawson's journey, it will, to my mind, be a fascinating one, for I can imagine the lonely struggle he made, his two companions dead, moving northwards through blizzard, snow, and fog over crevasses for three weeks, on his lonely way. Knowing Mawson as I do, I am not surprised at his achievement. To a man of less equable temperament or less determination the result would have been fatal.

''One of the most striking things in the wireless message received is that Dr Mawson on one of his journeys discovered a new coastline 300 miles south of where the Antarctic coastline is supposed to be. This is one of the greatest discoveries made of recent years. While regretting the death of these two young explorers we feel that their work will not be lost.''