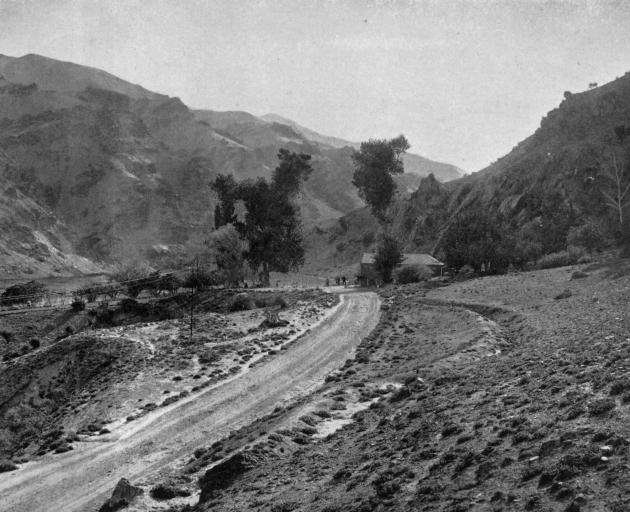 The half-way house in the Clyde-Cromwell Gorge. - Otago Witness, 26.9.1919.
The first shots in the Labour Party's election campaign were fired in the Grand Theatre last night, when a mass meeting was addressed by the candidates for Dunedin West, Central, and South - Messrs John A. Brown, J. W. Munro, and the Hon J. T. Paul.

There was a large attendance, and Mr J. D. Smith (organiser for the local Labour Party), who presided, thanked the public on behalf of the Otago Labour Representation Committee for attending in such large numbers.

The speaker stated that he would devote every ounce of his energy to organise Dunedin on behalf of Labour to ensure that there would be clean politics in this part of the country at least.

He ventured to say that the Labour Party was the most enlightened party in any country, and New Zealand was no exception. In order that the four Labour candidates might be returned for Dunedin, 600 workers were necessary.

It was intended to make a house-to-house canvas. Unless the people woke up to the fact that it was necessary to remove the social evils caused by the past five years' mal-administration, they would pay the penalty in the near future.

''It is callous brutality to allow the wives and mothers of this country to work as they have to do,'' stated Mr H. D. Vavasour at the Farmers' Conference last week, when he made a plea for the immigration of domestic servants.

Some of the wives living in New Zealand to-day worked 14 or 15 hours per day, and it was an absolute disgrace to the community as a whole, and a serious menace to the future generation.

The only alternative which the men and women had was to control the birth rate, and that would be fatal to the progress of the dominion.

One delegate suggested that immigration would not solve the problem, and he drew attention to the large number of girls who undertook office and shop work in preference to the domestic duties.

A motion was carried in the following form:- ''That the Government take immediate steps to procure domestic servants from Great Britain.''

London: A special correspondent, revisiting the Australians' old battlefields in France and Belgium, says that the peasants are striving again to raise corn amid shell-holes and smashed redoubts. Weeds grow thigh-high amid the ruins and tumbled earth.

The War Office has 200,000 Germans and 85,000 Chinese under British officers clearing barbed wire, old shells, and rails. They dynamite the German redoubts for steel girders. Old villagers dig among the ruins for hidden treasures. The chink of the demolisher's tool resounds across the wide valley where formerly great battles raged.

Souvenirs can still be found in the woods and fields in the shape of tattered uniforms and scattered crosses marking graves. As a general rule, along the whole front, where the ground is not heavily shelled, agriculture is beginning again, but elsewhere there is no sign - indeed, no hope - of settlement.

Every yard of shell-tortured earth will have to be laboriously treated.

''I can repeat all the Psalms by heart and most of the collects, also many chapters of the Bible,'' said the Countess of Liverpool when presenting prizes given by the Sunday School Union to winners at the Scripture examinations in Wellington.