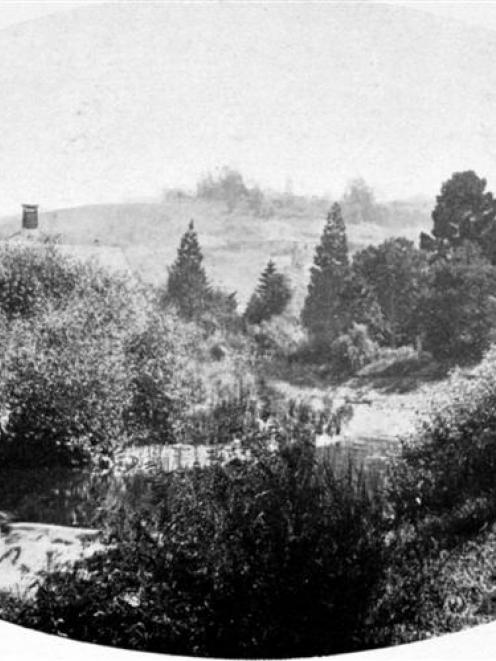 A scene on the banks of the Water of Leith, Dunedin. - Otago Witness, 8.11.1911. Copies of picture available from Star Stationery Shop, Lower Stuart St, or www.otagoimages.co.nz
At a conference of Presbyterian Sunday school workers, held in First Church Hall yesterday morning, the Rev. J. McCaw, of Lower Hutt, brought forward the following motion: - "That this conference of Sunday school superintendents and workers calls attention to the fact that, owing to increasing desecration of the Sabbath, the work of the Sunday school teacher is being increasingly hampered. In view of the importance of this work in the development of national character, the conference appeals to golf and other clubs to refrain from employing boys in occupations on Sunday that interfere with attendance at church and Sunday school."

The mover said he had previously complained of golfers in his district waylaying the children on their way to Sunday school and seeking to entice them to the golf links. The evil was very widespread. Mr W. A. Patterson, of Khandalla, seconded the motion, which was carried unanimously.

• Corinthian Park, as a park, will shortly be a thing of the past. It will be remembered that this ground was secured by the Otago Football Association about five years ago for a playing area; but some two months ago the association, finding the ground too small for its purpose, decided to sell it.

An offer of 1300 was then received for the property from Mr J. H. Hancock, and as the association had only paid 800 for it in the first place, this meant a handsome profit of 500, and it was decided to accept Mr Hancock's offer.

He in turn passed it on to a syndicate at a price in the vicinity of 2100. The gentlemen comprising the syndicate at once cut the block up into 23 sections, and these were sold on Tuesday by auction, when the total purchase money received came to 3097 - or 2297 more than was paid by the Football Association some five years back.

• Mr E. Hartley delivered an address entitled "England's Menace" to a good audience last night at the Early Settlers' Hall. Mr Hartley at the outset defined Socialism, and pleaded the cause of the working man, giving some striking illustrations of the contrasts in England between the extremes of life.

He argued that food was cheap in Britain because the price was kept down in order that a low standard of wages should be maintained. This meant cheap labour. The speaker contended that capitalism should be abolished, so that the benefits now taken by the capitalist should accrue to those whose labour produced the profits. A somewhat extended report of the lecture is unavoidably held over. - ODT, 9.11.1911.