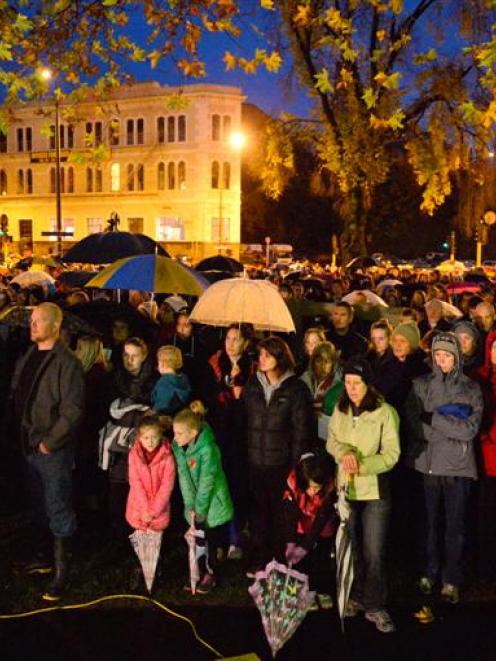 Crowds gather for the Anzac dawn service in Dunedin yesterday. Photo by Gerard O'Brien.
Now is an opportune time to ask about the meaning of Anzac Day and how it ought to be commemorated, writes Tim Pettengell, of Dunedin.

With the centenary of the Gallipoli landing two years away, what is the meaning and significance of Anzac Day for all those who call Aotearoa New Zealand home?

And how should Anzac Day be commemorated into the future?

These questions of why and how have only arisen within the last decade, for at least three reasons. First, the number of veterans is diminishing.

The youngest World War 2 veterans are in their late 80s and, while there are veterans from post World War 2 conflicts at commemorative services around New Zealand, their service did not touch, impact or impinge upon lives as the world wars did. As such, the experience of war for the majority of New Zealanders today is at most remote and by inference.

Hence the second reason. Without this direct connection to war the meaning has changed for most. In the words of John Bluck, at one time Anglican dean in Dunedin: ''Generations born long after all the wars now attend services and listen to the reveille and the Last Post.

''These rituals speak to the newcomers not of parade grounds and army camps they've never seen, but of the romance of soldiering woven into family stories, of fighting for forgotten causes in impossibly foreign places, of defending ideals that bemuse us now in an age where patriotism is hard to spell.''

The final reason is that, as a people, we have become interested in our ''family stories''. And through the reclaiming of ''family stories'' - among other things, we have come to see not only that war does not respect age, culture, religion or ethnicity. In fact, war reduces society and people down to the point of who survives.

Who is left to tell the story of what, why, and how? But ''family stories'' also show us that in war - to borrow the formula of the Apostle Paul - there is no Maori, Pakeha, or immigrant. Just mutually shared death, destruction, suffering and grief. As well as camaraderie, friendship, survival and hope.

Thus at Anzac Day services, unlike Waitangi Day, all of us stand as equals within the society and culture that constitutes and defines what it is to be a person living within Aotearoa New Zealand. That this is so suggests one of the reasons why so many turn out for Anzac Day services.

These reasons also suggest something sacred and profound is occurring on Anzac Day, which transcends the remembrance of the impact of war on lives and society.

This hallowed moment of time and space whispers to us in the familiarity of the service - the format, the hymns, the prayers and the address. The familiar notions of peace, duty, loyalty and honour, of heroism and the ultimate sacrifice.

When you read the letters and diaries of the soldiers of World War 1, there are two distinct groups of letters. The first are those dated pre-April 25, 1915.

These letters convey a sense of what a lark they thought this soldiering all was. How they were enjoying themselves, and having a great holiday. Then there is the second group of letters and diaries dated post-April 25, 1915, which speak of the shock and trauma as they lived and experienced the brutality of war. Their strong sense of despair, futility and stoicism as they struggled to stay sane and alive through the relentless and senseless violence that is war.

It is in this second group of letters that concepts of duty, loyalty to king and country, and ''doing one's bit'' emerge as the soldiers' means of not only coping but also making sense of what was happening to them.

While for those back in New Zealand, concepts of duty, courage, and sacrifice helped them to make sense of the mounting death toll, the loss of loved ones, and eventually the injured, the maimed and the mentally scared.

From this shocking contrast between cheerfulness and disillusionment, the answers to the questions of why and how will be found. Yet, the onus for this to occur falls on the veterans. You who have known war, experienced war - whether directly or indirectly - need to tell us who have not, not only how brutal and inhumane war is, but also why you thought war was necessary, the only answer; which led you to enlist or support the war.

Only through your living story, your story of why - with all its optimism and hope; yet also the despair, disillusionment, futility, senselessness, as well as the loss and suffering - will we who have not experienced or known war learn and come to discover something the truth of this poem by Studdert-Kennedy - a World War 1 veteran:

I also believe there is one more thing veterans must do if Anzac Day is to persist. The service needs to be turned over more to the younger generations. They need to be encouraged not only to find that hallowed whisper, but also have permission to transform this whisper into a strident voice by allowing them to plan and conduct the commemorative service in a way that is meaningful and significant for them.

Let them sing new songs, write new prayers, and speak of family stories. Let them pick up the mantle and carry it without restriction or encumbrance.

Let Anzac Day cease to be about the ''romance of soldiering'' and of meaningless ideals. Instead, let Anzac Day be about shattered optimism and strife-born hope.

That says while peace in its widest sense is a forlorn endeavour, it is still worth pursuing because the alternative - conflict and war - is a perversion of our humanity.