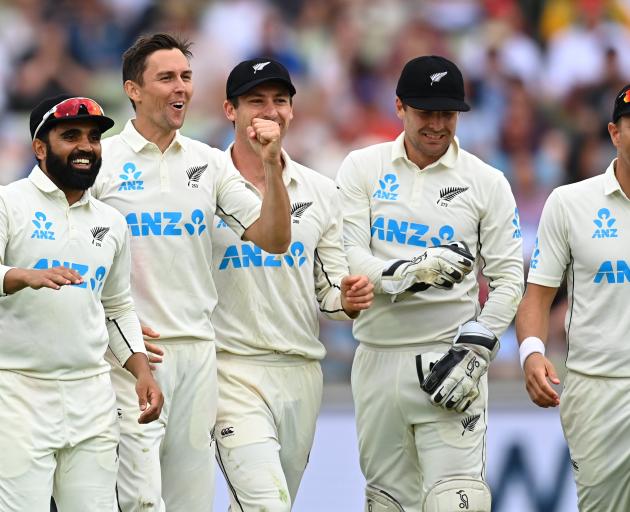 New Zealand paceman Trent Boult (second left) celebrates with team-mates (from left) Ajaz Patel, Will Young, Tom Blundell and Neil Wagner after dismissing England batsman James Bracey on day one of the second test at Edgbaston yesterday. PHOTO: GETTY IMAGES
How many wickets will Black Caps spinner Ajaz Patel need to take in the second test against England to a get a gig in the World Test Championship final?

What about Tom Blundell? Will a slick effort behind the stumps make any difference to his prospects of playing in next week’s game against India?

And what happens if Will Young scores big and Ross Taylor stumbles into another lbw?

The Black Caps made an unprecedented six changes to the test line-up. They have never done that mid-series before.

It is extraordinary considering they have a rare opportunity to record an away-series win against England.

Such is the impact of the World Test Championship it has turned what would be an enormous occasion into something which more closely resembles a warm-up match.

Rugby fans have grudgingly learned to accept rotation but it’s foreign to test cricket fans who regard each and every test as sacrosanct.

Placeholders have not been required at test level until now.

But that is the role Patel, Blundell, Young, Daryl Mitchell and Matt Henry have been asked to perform.

Patel, Blundell and Young are ostensibly in as injury replacements for Mitchell Santner (finger), BJ Watling (back) and Kane Williamson (elbow).

None of those injuries appear serious enough to rule the trio out of the final.

That begs the question of what happens if the replacements have a stunning test.

You could mount a compelling case for their inclusion regardless.

Patel robbed a wicket with a wide short one on day one but looks a lot more likely than Santner to rip through a batting line-up.

But Santner has been favoured because he adds depth to the batting line-up.

He is the batting insurance for all-rounder Colin de Grandhomme who is devastating one day, dud the next.

Blundell let a regulation take slip away for four byes but nabbed three catches and was in good form with the bat for Wellington at the end of the New Zealand domestic season.

Watling is the sentimental favourite for a starting spot, though. The gloveman is retiring following the World Test Championship.

After years of tremendous service it would take a cold heart to leave him on the sideline even if the other player is arguably in better form.

Meanwhile, Young has scored back-to-back centuries for Durham and will heap even more pressure on Taylor if he can continue that run in the second test.

But of the six changes to the line-up, Trent Boult’s inclusion appears the only one that will stick.

Boult missed the first test because he elected to take a short break before joining the team in England late. The left-armer bowled well after the tea break.

He picked up the wickets of Rory Burns and James Bracey with outswingers good enough to convince a blind man he should share the new ball with Tim Southee against India.

If Boult plays in the final then one of the bowlers from the first test will miss out.

And it looks like Neil Wagner might be the unlucky seamer unless the Black Caps go with four seamers and forgo a spinning option. 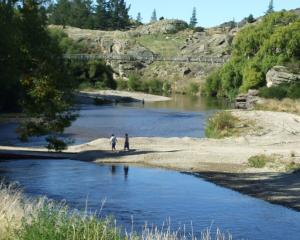