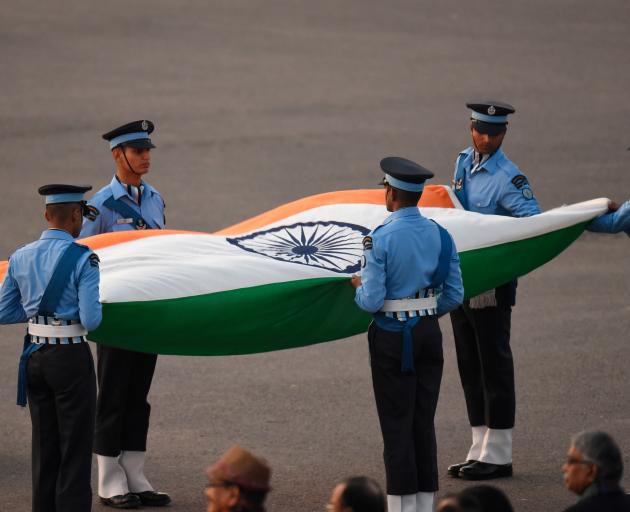 Officers with an Indian flag during the Beating Retreat ceremony in New Delhi as part of Republic Day celebrations on January 29 this year. Photo: Getty Images
Mathew Zacharias laments India's rejection of a poignant hymn.

From early childhood, I had a passion for military parades and military bands, though it was limited to watching a few dozen policemen or soldiers going around in circles, bleating their trumpets and banging their drums to unknown tunes.

It was a wow moment for me when I got invited to witness India’s Republic Day celebrations in New Delhi, on January 26, 1992.

It was impressive to watch all the military might and cultural diversity on show in Rajpath, New Delhi. But I was most impressed by the Beating Retreat ceremony held near the Presidential palace at the end of three days of celebrations, on January 29. This is always held at Vijay Chowk, in front of the Presidential Palace (Viceroy’s Palace during British Raj). This is performed with considerable pomp and ceremony, with many similarities and perhaps on a grander scale than similar events elsewhere in the world.

About 1000 men from all three branches of the military, all in their spectacular uniforms, took part in the Beating Retreat ceremony, needless to say with military precision. The band played various tunes for about an hour.

And the last piece was a very moving performance of the well-known Christian hymn, Abide With Me.

As I get older, many memories seem to get cloudy and fly past me, but I vividly recall this particular performance of Abide With Me.

The weather was particularly cold that evening, but the crowd didn’t seem to care. The sun was dipping behind Raisina Hills and its last rays were shinning over the Presidential Palace like a hallow over it, the silhouette of the mounted soldiers on their horses and camels was clearly visible at a distance, the last of the black kites had stopped circling the misty skies and the crowd in the packed galleries were visibly thrilled.

This was the first time I heard this hymn in its real splendour; it was something really worthwhile listening to.

The harmony of the music from the thousand musicians was accompanied by the bells from the Cathedral Church of the Redemption nearby. I almost had tears in my eye and the massive gathering of people, young and old, men and women and children of every age, all listened excitedly. It was a very special occasion.

This was last of the band’s music. Soon the tricolour was ceremoniously lowered and the band marches off playing Sare Jahan se Acha, a famous patriotic song from the time of independence struggle. I was still an Indian citizen at that time, though I had started my life in New Zealand by then.

The hymn Abide With Me was used in the first Beating Retreat in New Delhi in 1950.

The hymn and its place in the parade has been the same for the last 70 years. The hymn was chosen because it was the favourite Christian hymn of Mahatma Gandhi and as an attempt to demonstrate India’s secularism. Who wouldn’t be impressed by it?

When Henry Frances Lyte wrote it in 1847, he never realised that it is a very comforting music for anyone at any time, anywhere. It begs God to be present with us always and throughout our life, until death. It ties our daily life to our life’s struggles; wars, death, loneliness, disappointments, challenges, successes, happiness, losses and anything else. No wonder Gandhi liked it and the Indian military always used this hymn to end the parade.

There is a reason I am recalling all this now. 2019 had been a rather challenging year for India; there are internal challenges to its constitutional guarantee of equality, freedom and secularism.

In an ongoing attempt to make India align with its majority faith, the ruling party has decided to revise all practices of the past which are not truly "Indian". Someone identified Abide With Me as a Christian hymn and decided to remove it from the list of music for Beating Retreat and replace it with other suitable Indian music.

Being a New Zealand citizen now, I have no say in what they do: that is progress and modernisation of India, I suppose. I can only shed silent tears and remember part of the Hymn:

Abide with me, fast falls the eventide

The darkness deepens Lord, with me abide

When other helpers fail and comforts flee

Help of the helpless, oh, abide with me.

Luckily, my prayers have been answered for another year; after protest from many in the country, including those in the armed forces, the hymn was reinstated for another year, in its rightful place: though there were subtle changes, such as using Parsifal bells instead of the bells of the Cathedral Church of the Redemption.

I watched it on the YouTube; perhaps for the last time — it may not be there next year!

-  Mathew Zacharias is a Dunedin humanitarian worker and anaesthetist.