City has no difficulty in ignoring its history 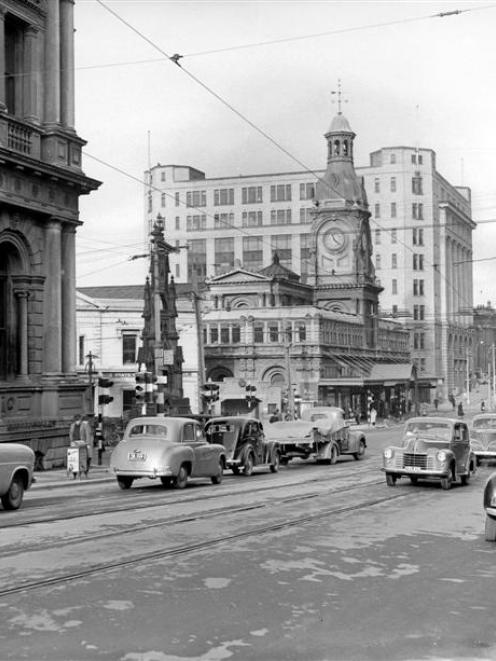 The Stock Exchange building stands in front of the Chief Post Office in 1952... "One of the most iconic buildings ever lost to Dunedin," Jo Galer says.
An awareness of history is the key to support for heritage buildings, Jo Galer of Dunedin, believes.

The threat to a row of historic buildings in Princes Street shows how, despite the frequently regretted loss of so much of Dunedin's early architecture, the lessons of our past keep being ignored.

One of the most iconic buildings ever lost to Dunedin was the Stock Exchange, the towering Victorian structure on Princes St which gave Dunedin's Exchange area its name.

Situated where John Wickliffe House stands today, it was a landmark many people still remember.

The study of how this building came to be demolished in 1969 illustrates how easy it is to forget, or just not learn, about Dunedin's colonial beginnings.

Hundreds of Dunedin folk, many seeking pieces of the masonry as memorabilia, thronged the streets to watch the building's spectacular demolition, with a heavy steel wrecking ball brought in from Christchurch just for the job.

Few who watched that day in 1969 would have known much about its early history; that 100 years before it was regarded as New Zealand's finest building in what was then the nation's principal city.

Ironically, after its demolition, there was an outpouring of letters and soul-searching in newspaper editorial columns about what should replace it, and more than ever before, concern mounted at how much Victorian architecture Dunedin was losing.

The Stock Exchange was gone, and finally people were waking up to what they had.

The Exchange building started life as Dunedin's new Post Office and was completed - using Oamaru Stone as construction material for the first time - in 1868 to the proud design of William Mason, who co-founded Mason and Wales architectural firm.

From the outset controversial, the building was never destined to process the mail.

Instead the graceful Palladian structure with its Grecian columns, moulded arches, and clocktower, was commandeered from the General Government for local use, due in no small way to the machinations of the colourful and controversial politician James Macandrew.

As well as hosting within its highly decorative hall some of Dunedin's grandest early community events - including the 1869 citizens ball in honour of the visiting Duke of Edinburgh, with a veritable who's who of early Dunedin identities in attendance - it became the home of New Zealand's first University from 1871.

The University of Otago quickly outgrew the building.

After rejecting an offer from the Dunedin City Council to buy it - the council felt it would make a fine and commodious town hall (the Municipal Chambers was still to be built), the university sold the building to the Colonial Bank in 1877.

After the Bank merged to become the BNZ about 1900, the building became a rabbit warren of shops and businesses with correspondingly awkward structural changes under the ownership of the Dunedin Stock Exchange Proprietary.

In 1954, the Government bought the building promising future plans.

But very quickly it was understood these plans did not involve keeping the building.

The rot literally set in, and by 1969 there were claims it was unsafe and an eyesore.

Research of internal Government papers surrounding the building's final decade, show how the Ministry of Works had a deliberate and documented policy, not made public at the time, yet implicit in the slowly deteriorating building, of letting the building run-out, as the ministry called it.

The idea was not to undertake major expenditure on the building, only repairs and maintenance seen as absolutely necessary.

The Dunedin City Council of the 1950s and 1960s, along with other business leaders and MPs for the Dunedin area, actively campaigned for the demolition of the Stock Exchange over many years; the economy was precarious and they felt Dunedin's central city area needed a modern image.

Retaining, strengthening and renovating the 100-year-old building was never considered. But in the end, the community let it go.

They had the power to advocate for its retention, but only a few penned letters to newspapers in support of keeping the building.

Most of the editorial opinions and letters in the Otago Daily Times and the Evening Star also wanted it gone.

Were these people and community leaders just philistines? New buildings were desired after decades of scant construction in Dunedin, and old buildings were seen as dirty and archaic, rather than historic and beautiful.

The people behind the demise of the Stock Exchange had a laudable desire for Dunedin to be prosperous; they just did not value this building, and it is doubtful they knew much of its history.

With the lack of civic support for the row of Princes St buildings which also have strong links with our gold rush past, history is once again in danger of being undervalued.

One important factor in the demolition of the Stock Exchange remains as ever a constant counterweight to the goal of preservation and adaptive re-use in the case of many Dunedin buildings: a lack of local awareness about the individual histories of buildings.

This awareness must involve knowledge of their original purpose, and the ways they signify Dunedin's unique past.

Without knowledge of their history, the reasons why they should stay on our landscape remain obscured.

Public support for their retention then becomes tenuous. What happened to the Stock Exchange building is a case in point.

It had a glorious history in terms of what Dunedin has always celebrated - its gold-inspired past, its university, its one-time industrial dominance let alone architectural merit.

Yet by 1969, the passage of time and the effects of numerous changes and different functions accommodated within the structure meant that only a few people among those who did speak out against the pending demolition knew how important it was in terms of Dunedin's colonial beginnings.

The Historic Places Trust supported the demolition, agreeing with the Ministry of Works that the building was unsafe.

Around this time, threats also emerged to the Otago Boys High School's tower and to the second University of Otago building.

However, what was different in these examples was a public awareness of their historical community value.

Both had remained a school and a university since they were built, and their history was still a present force.

As a result, there was a will to sort out structural issues.

The legacy of the outrageously grand Stock Exchange building is what we can learn from the tragedy of its loss.

It shows how the public - the Government, local councils, developers and the media to name a few - need to remain vigilant of the mistake of overlooking heritage or historical value in any of Dunedin's historic buildings.

For embodied within a seemingly indistinguishable hulk, as the Stock Exchange building was called in the 1960s, was the history of a city itself one that needed to be remembered, cherished and ultimately spared from destruction.

- Jo Galer researched the story of the Stock Exchange Building for her BA (hons) dissertation in history at the University of Otago.