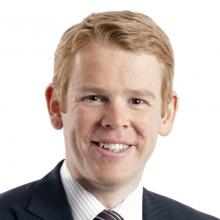 Chris Hipkins
Education Minister Chris Hipkins made his intentions about the future of New Zealand’s education system very clear before the election. And he is now starting to deliver on his promises.

The changes, although well signalled, are said to have caught some of his opponents unaware.

At the top of the list is Mr Hipkins’ requirement for private charter schools to change direction, quickly. His Education Amendment Bill restored guaranteed places for staff and student representatives on Tertiary Education Institution councils.

But the Bill also ends what the minister says were the previous government’s "failed" national standards and charter schools — both of which he says were driven by ideology rather than evidence.

Mr Hipkins is quick to condemn the National and Act charter schools, despite evidence non-achieving pupils were reaching levels of achievement previously unheard of. It seems wrong for Mr Hipkins to complain about ideology-driven decisions when, clearly, his dislike of the charter schools is a major reason he is demanding changes.

There is a provision for existing charter schools to operate under their contracts while the Ministry of Education discusses possible options, including in the state system, on a case-by-case basis.

The preferred option for Mr Hipkins is to explore early termination of contracts by mutual agreement. Operators wanting to be involved in education can apply to the minister to establish another form of school, such as a designated character school. As part of the process, applications will need to meet the relevant and so-far unspecified requirements.

Once again politicians believe they know best how parents should educate their children. In this case, Mr Hipkins has been captured by the teacher unions, which favour the disestablishment of charter schools.

Complaints about charter school teachers not being registered are false in most cases. Staffing problems in state schools in the North Island already mean unregistered teachers are being employed. What is the problem? Charter schools teach the national curriculum and have registered teachers.There is an open threat by Mr Hipkins to charter schools. If early termination is not agreed by both parties, he reserves  the  right to issue a notice of "termination by convenience", under the existing contracts of charter schools, by the middle of May this year. This will take effect at the end of the school year.

Since the introduction of Tomorrow’s Schools, New Zealand’s education system has been changed by consecutive governments.

The changes to education administration in New Zealand which began in 1989 were part of the radical public sector reform started in 1984, after the election of a Labour government. There was a move to contracting, and to measuring performance in terms of specified results. In some areas, such as health, elected boards were abolished. Service providers competed to win contracts from the government.

Labour remains haunted by Rogernomics, even so far on.

National is not exempt from criticism. Its education ministers have also been guilty of deciding how children should be educated.

The establishment of charter schools gave parents the right to decide how their child was to be educated. Unions criticised the amount of money used for establishing the schools, ignoring the fact it was much less than to establish a state school.

Criticism was also levelled when a charter school failed, again ignoring the number of state schools having a commissioner appointed when teachers and the elected boards of trustees were found wanting.

The bright spot in all of the changes Mr Hipkins is proposing is trying to find a solution to avoid the needs for parents to pay school fees each year. There is no doubt some families struggle with the amount of money they need to provide so their children can participate freely in all activities.

Mr Hipkins is one of Labour’s most driven MPs with a desire to effect change come what may. Education and health are touchstone issues for Labour, and parents and patients are often a secondary consideration.

Whether either system can withstand another  overhaul during the next three years will be a test of stamina for all involved.

I think the Government needs to think carefully on what mandate it has been given by the electorate. I haven't detected much concern on these educational issues that are getting priority. However, there is a lot of concern on the cost of living, housing and mental health management.

This all started with the H clark government all normal values are gone...