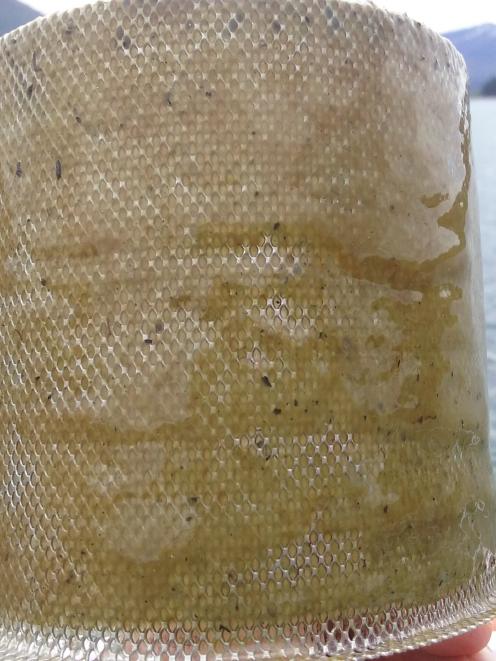 It is past time to drive action on "lake snow" ("lake snot").

The slime produced by an  algae in Lake Wanaka — it is also in Lake Coleridge and was found last year in Lakes Hawea and Wakatipu) — is unsightly and a significant nuisance.  More importantly, it could have long-term and unknown ecological impacts.

The quality and clearness of New Zealand’s deepwater southern lakes is dazzling.  Overseas visitors marvel at the shades of blue and the crisp clarity of the water.  These are treasures  enjoyed by many.

Then along comes this particular blight.  It was first noticed in Lake Wanaka about 2004 as those fishing spoke of fouled lines and blocked engine intakes.

Washing machine and other filters in Wanaka began to become clogged because the town water supply comes from the lake.

By last year, lake snow was found to continue  through the winter and the blooms around Stevensons Arm have been huge.  Multisport athletes in competitions have emerged from the water trailing bits of slime.

Fortunately,  it would seem the slime is not toxic to humans.

It was identified in 2008 by Marc Schallenberg, from the University of Otago, who found with then PhD student Tina Bayer, that it was linked to the unusually high numbers of a new algae, cyclotella, in the lake. The same algae had also been found in another relatively unpolluted lake in Seattle in the United States.

Just like didymo ("rock snot"),  under certain conditions cyclotella secretes large amounts of mucus. This can all join together to form a mat.  Just why it appears is still a mystery. Increased nutrient run-off from the growing urban areas and from farms is a possibility.

One of the reasons the big southern lakes are so clear is because of the lack of nutrients. A warming lake might be a cause as might the colonisation of the lake by an exotic water flea in the early 2000s.  There is also the possibility spraying of the invasive lake weed lagarosiphon with herbicides could play a role.

Dr Schallenberg and other scientists have been frustrated by rejected funding applications on research into lake snow, and the Otago Regional Council only stepped up monitoring last year, although it has paid for some research on Lake Wanaka’s health.

Not surprisingly,  the council’s slow response became a significant issue at the local elections last year for Wanaka voters.

The Queenstown Lakes District Council has been concerned and introduced pilot filtering of part of Wanaka’s water supply.

But everyone is operating in a near information vacuum. There are the puzzles about  what causes the blooms. And why do the same or similar algae in other lakes not produce lake snow?  Will the blooms spread further?  What will be the ecological impacts?

It is amiss  more research has not been undertaken already. The Ministry for Primary Industries needs to be more involved as, perhaps, does the Ministry for the Environment. It is not good enough to do the minimum and hope for the best.

It was encouraging about 20 freshwater scientists and managers met at the regional council offices last month, and the breadth of representation was heartening, including Canterbury, Otago and Southland regional councils, the Cawthron Institute, Landcare Research, Niwa and MPI.

But questions need to be asked about why it took so long before such a gathering took place and about why requests for research funding over the past few years have been turned down.  More urgently needs to be understood about lake snow so that its potential threat can be countered or, at the very least, managed.