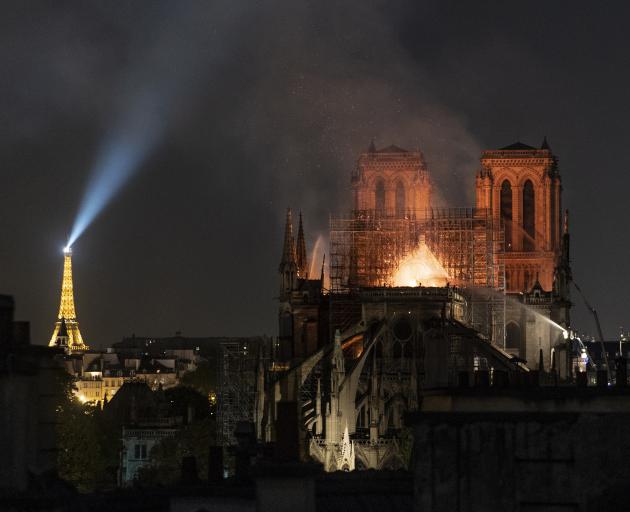 Flames and smoke rise from the Notre Dame Cathedral in Paris last week. Photo: Getty Images
Behind what makes the banner headlines, what reverberates and resonates, what attracts the newspaper readers and sets online hits on fire lie intriguing questions about people and about society.

Often, there is more to this than the obvious. The furore over Israel Folau and his infamous repent social media post, for example, is so late 2010s. There is the understandable outrage at antediluvial attitudes. There is the spectacle of a brilliant sports star self-immolating. And there are issues of sexual discrimination, employment obligations, free speech and possible impact on gay youth.

Perhaps, Folau's folly also rates through the grandstand roof because it represents a high-profile, and forlorn, volley in the "culture wars", largely being won in public discourse in much of West. The "progressive" social front is marching on. Folau has been blown apart.

What then of Notre Dame? Why did a blaze in a building, where no-one was even killed, light up the news throughout the world?

Why, in particular, did so many New Zealanders look on at first aghast and then with dismay and sorrow?

Again, there are the obvious answers. Notre Dame is a grand old building going back to the 12th century. It and the Eiffel Tower are the most prominent landmarks in the city which draws more tourists than any other, about 14 million to 25 million a year depending on what figures are used.

Again, too, there are underlying cultural reasons, especially for Parisians and the French. Notre Dame, Our Lady, is very much France's grand dame. The treasure is at and in the heart of how the French see themselves.

The rest of the Western world shares a portion of this attachment. Notre Dame cultural imprints are rooted in history, literature and film. What middle-class Western child does not know a version of The Hunchback of Notre Dame? Victor Hugo's 19th-century tale was already popular before film (there were five silent film versions) and then the Disney empire, through animated adaptation, spread a version of the story of Esmeralda and Quasimodo ("the beast") far and wide. Add in theatre, musical productions, television series, ballet and even a 1984 video arcade game and the influence is pervasive.

How appropriate Hugo wrote his masterpiece to resurrect interest in the Gothic architecture, notably Notre Dame. His efforts prospered, and the cathedral was rebuilt and the central spire, the one that collapsed in the fire, was added.

Notre Dame survived world wars and the French Revolution. It will be rebuilt successfully in the aftermath of the fire, just as York Minster was on a smaller scale after its 1984 fire.

It stands as a famous emblem of Western history and civilisation. Whether Christian, atheist or agnostic, it links us to the past through medieval times, the Renaissance and recent centuries.

The cathedral is a focal point of human heritage, both for what the building is and for what it stands. We do, and should, glory not just in people but also in stone and art, in history and symbols - and in Notre Dame.