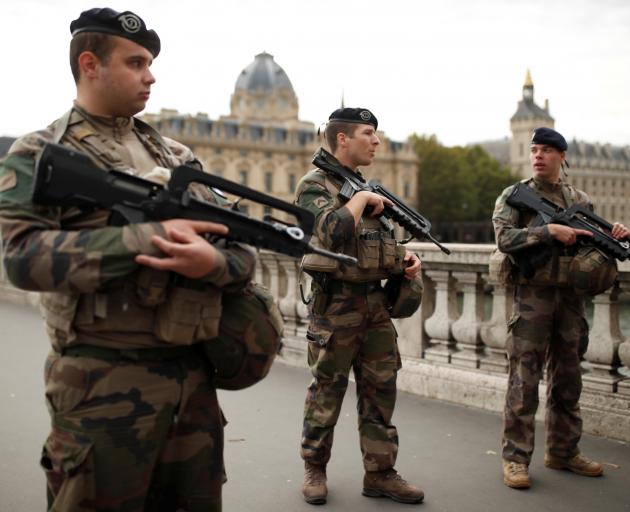 French broadcaster BFM TV said the attacker had converted to Islam 18 months ago.

Officials did not say anything about the motive for the attack and they said they were still trying to discover if there was a terrorism link.

The area around the police headquarters, which is close to Notre-Dame Cathedral, was sealed off and a metro station was shut for security reasons as the attack unfolded.

The dead were three men and a woman, according to Paris prosecutor Remy Heitz. Another person was wounded and is undergoing surgery.

Heitz said police were searching the attacker's home, and that anti-terrorist investigators were evaluating what had happened, for any terrorist links. The attackers wife had been brought into police custody but not charged, the Paris prosecutor's office said.

Speaking outside the police headquarters, French Interior Minister Christophe Castaner said the attacker was known to his colleagues and had worked for some time in the IT department.

A police official and member of the collective "Police up in Anger", which lobbies for better conditions for officers, was quoted by franceinfo radio as saying the assailant had experienced issues with his supervisor.

"I know there were tensions between him and his direct supervisor," Christophe Crepin told franceinfo. "I do not think this is a terrorist act."

Jean-Marc Bailleul, a police union leader, described the incident as criminal rather than an act of terror. "It was a moment of madness," Bailleul told BFM TV.

In the past four years, the French capital has been rocked by violent attacks resulting in mass casualties.

Coordinated bombings and shootings by Islamist militants in November 2015, at the Bataclan theatre and other locations around Paris, killed 130 people in the deadliest attacks in France since World War Two.

In a three-day killing spree in January 2015, Islamist gunmen killed reporters and illustrators at satirical weekly Charlie Hebdo, police officers, and shoppers at a Jewish supermarket.