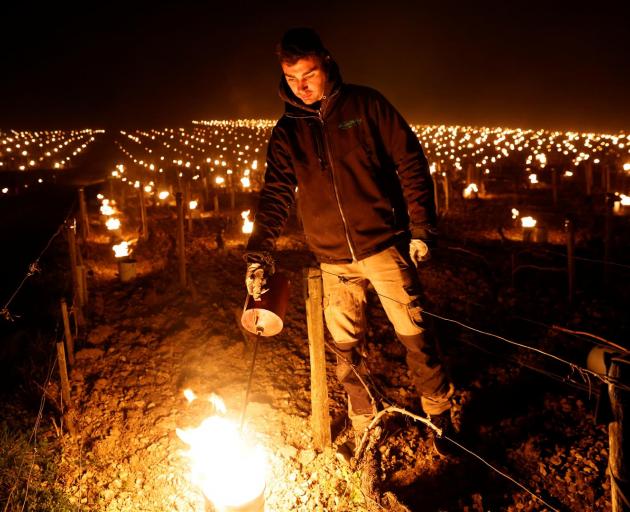 A wine grower lights heaters early in the morning, to protect vineyards from frost damage outside Chablis, France. Photo: Reuters
French winemakers have lit candles and burned bales of straw to try to protect their vineyards from sharp spring frosts, with the forecast of more cold nights this week raising fears of serious damage and lost production.

Temperatures plunged as low as -5°C overnight in wine regions including Chablis, in Burgundy, and Bordeaux, which could hurt shoots already well-developed because of earlier mild weather.

Outside Chablis, known around the world for its fruity, acidic white wine, a deep orange glow from tens of thousands of candles hung over the rolling vineyards in the early hours.

Winemaker Laurent Pinson said he had put between 300 and 600 large candles - burning cans of paraffin - across many of his 14 hectares of vines.

"The harvest is at stake over a few nights - one, two or three nights - and if we have no harvest, that means no sales, no wine for consumers," Pinson told Reuters.

Candles are lit early in the morning to protect vineyards from frost damage outside Chablis, France. Photo: Reuters

Although it was still too early to assess the damage, producers said it was inevitable.

"It will also be cold overnight from today to tomorrow so there is a lot of worry," said Christophe Chateau, from the Bordeaux wine producers group CIVB. "With two nights in a row there is twice as much risk of the vineyard being damaged."

Winemakers also put out smouldering straw bales to provide a smokescreen to prevent the early sun from burning frozen shoots; sprayed water over the vines with the aim that the ice that forms protects them from freezing; and installed heaters and wind towers that mix the cold air near the ground with warmer air above.

Spring cold snaps have been happening earlier in the year, in April rather than early May some 20-25 years ago, meaning the fall in temperatures can be greater, Pinson said.

"So we are no longer on small spring frosts at -1°C/-2°C, we can see frosts at -4°C, -5°C, -6°C or even more in some areas - it is very problematic because in terms of protection (of the vineyard) there is no longer the same efficiency at all," he said.

A severe cold spell in April 2017 damaged vineyards so much that annual French wine output was the lowest in history. Frosts had already caused damage the previous year and again in 2019. 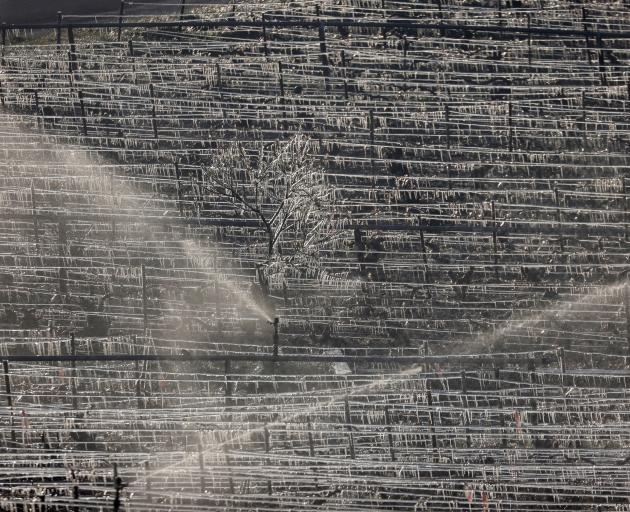 Water is sprayed in the morning to protect vineyards from frost damage outside Chablis, France. Photo: Reuters
Reuters
Comment now