A considerable amount of water has yet to flow under the bridge before the long-anticipated reform of the country’s ailing water services reaches fruition.

Last month the Government announced proposals for four multi-region water providers which would take over the control of drinking, storm and wastewater from the existing 67 territorial local authorities.

It says this is the only way to pay for the billions of infrastructure investment needed to provide safe drinking water and to stop sewage and stormwater pollution.

There is an air of inevitability about the thrust of the proposed changes, even though questions remain about the detail.

It is well known many cash-strapped local councils have struggled to properly fund their water services and there are still too many places where residents cannot drink the tap water, where sewers fail, and effluent causes environmental damage.

The Government sees the four-entity model as a balance between providing efficiency of scale and being able to engage meaningfully with the communities which will own these entities.

However, there are concerns the new arrangements will be too one-size-fits-all and that the governance model will not allow for adequate community input/representation.

There have also been some questions about the accuracy of the modelling showing how much ratepayers will save under the reforms over the next 30 years. The television advertising about the reforms, which appears to have been aimed at pre-schoolers rather than grown-ups, has drawn criticism too.

There is still some way to go regarding how councils may be compensated for handing over their assets, and anyone familiar with the nationalisation of any organisation or service will find it easy to relate to concerns about locals losing out when assets go into a melting pot.

There will be less reluctance about the new entities taking on the debt, but there are some councils which say they have no debt, and the Government is working with Local Government NZ on a support package to address this. 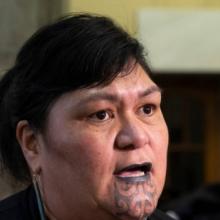 Nanaia Mahuta. Photo: NZ Herald
There is also the issue of whether the government will have to wave a big stick and make participation mandatory. It is clear the efficiencies sought would be difficult to achieve if some big players opt out.

Already Auckland and Christchurch City Councils are expressing some doubts about the impact on their areas. It has been fascinating to see Auckland Mayor Phil Goff talking up the virtues of water company Watercare, when its poor planning for water shortages is still fresh in our minds. Local Government Minister Nanaia Mahuta has not minced words on that, saying Aucklanders are paying too much for a water company which is not delivering adequate services.

Questions about whether Christchurch, or any other council for that matter, might get preferential treatment to ensure their participation, have been neatly sidestepped by Ms Mahuta by saying the Government and officials are continuing to work closely with local government to reach a position which gives the reforms the best chance of success. She is confident as these discussions continue ‘‘ we will reach an agreed position on the reforms’’.

There has been some criticism that the water reforms are leaping ahead of the review of local government, with a final report on the latter not due until April 2023. The justification for this was the urgency of the need to deal with the nation’s water problems.

Maybe that timing will be advantageous in the long run, giving local government more time to reflect on where its emphases should be once councils are freed from water service provision.

We await with interest the announcements expected from Ms Mahuta later this month about the support for local government and the next steps in the process.

Three Waters are busy recruiting lots of staff. The decision has been made and they are moving ahead at speed.

Three Waters is the agency that has been set up within Internal Affairs that is expected to manage the negotiations with Local authorities and establish, once the legislation is passed, the 4 regional water agencies. Of course they are recruiting. This work needs to be done now as part of the legislative process of passing the new law. The decision has not been made and and can only be made by parliament at the conclusion of the 3rd reading and the Bill has received Royal Assent.
Given the Govt's majority that is a forgone conclusion, but waiting until the Governor-General's signature is dry is idiotic. They need to start work now.
Inferring as you are that this is some sort of dictatorial move being made to usurp ordinary Kiwis rights is meddlesome and just plain wrong. The Bill has been through a long consultative process and hundreds of submissions have been made.
This is just normal process, not something nefarious.