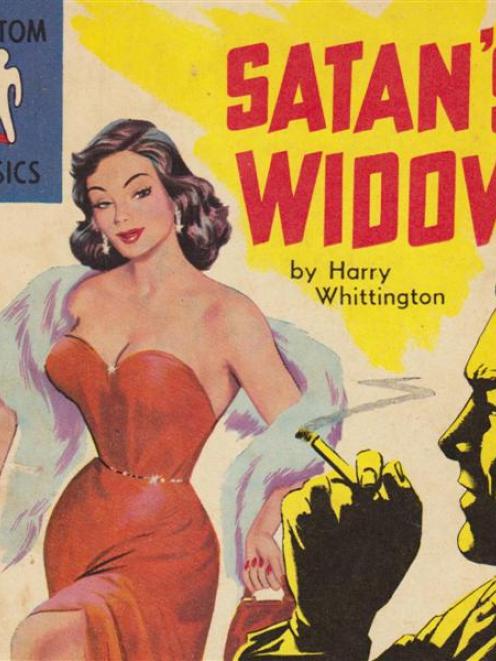 Most rational thinkers would agree a Renaissance Man is a man to be envied. Cultured, debonair and successful in many different areas, the Renaissance Man will always be invited to prestigious dinner parties, and clapped on the back at significant art openings.

It is because of this envy, an envy I have carried with me since my woeful days at Otago Boys' High, where I was caned to within an inch of my life for trying to BE a Renaissance Man and not a halfback, that over the past week I have sought intellectual ecstasy in three different and quite testing cultural areas.

For starters, and this was a giant mankind step, I watched the closing episodes of The Block NZ.

Then I viewed the movie Hellboy, and finally, I read Satan's Widow, by Harry Whittington.

The Block NZ was a fascinating thing. I had not seen it before, but had read of its rating higher than an All Black test series.

At the risk of having stones thrown at me in the street, I will have to say I liked The Block NZ.

I haven't googled the names for fear this web search will count against me when I am standing in front of St Peter's gates, which by then will be a Gigatown and well-informed, but I think there was one called Damo.

And a klutz; he kept burning stuff.

His jokes would have got Roger Sutton sacked three times, but partner Jo adored him.

She was real purty and squiggled her nose every time Damo said something inappropriate.

Actually, all the contestants, both genders, were real purty, I suspect, dare I say this, purty was why they were chosen.

I liked the former Miss Samoa, who seemed giggly and sweet and a bit hopeless, but turned out to be as competitive as Michael Jordan.

There was one who became pregnant at the start and nearly pulled out. Her partner, lovely guy, had to work real hard.

But they finished last.

And there were two real pros at doing up houses - he was an engineer - who were actually as soft as yoghurt, and gave the last-placed pair $30,000 after the auction.

The Block NZ works because of the people. Mercifully they didn't have fake anger and fake feuds.

It is a shameful box-ticker - they even had a cooking competition to grab some of that audience.

One assumes the next series will have an X Factor component as well. It will be nice if it has less product placement.

This had been highly recommended, but I didn't understand a word of it, how Hellboy came to be, why they didn't kill Hellboy when they had the chance, yada yada.

I couldn't help but notice it had a similar storyline to Shrek, and the big guy, who was a good fighter and mightily strong, looked exactly LIKE Shrek.

Hellboy was, however, grand escapism action.

Apparently Hellboy 2 is even better.

My people in publishing tell me the book is dying.

How interesting then that Satan's Widow, by Harry Whittington, a book, well, paperback, I bought in an op shop for 10c, has sold 1,287,000 copies.

First published in 1953, by August 1958 it had reached that astonishing sales figure.

Fifty-six years on, I cannot begin to calculate how many copies it has sold, how many bookshelves in high-class home libraries it has lit up like a blazing Taiwanese flare.

One might assume a book written back then and selling so much might have had an almost Ayn Rand influence on the prominent newsmakers of today.

Even by the second page, Whittington has his Remington typewriter and toady hero clacking lasciviously.

''I was higher than the stratosphere last night. I'm not responsible for what I said.''

But let's hail the Renaissance Man even more.