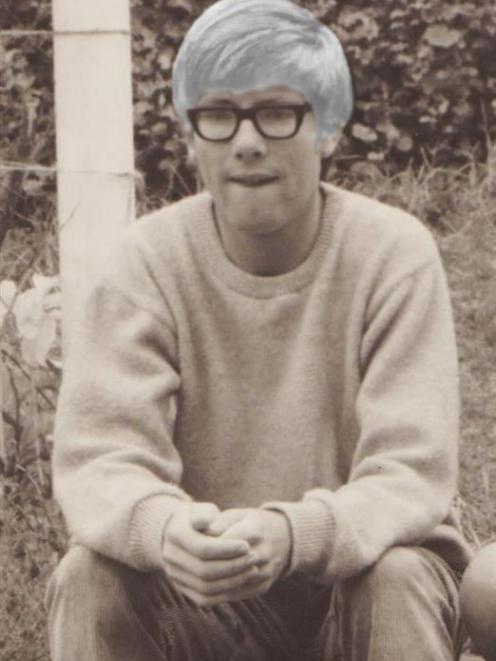 Youthful Silver Fox or white lies? Photo supplied
A close friend, steeped in fashion, was chatting steeply to me during iD Fashion Week, and, noticing, with a pointing and immaculate fingernail, one of the week's male acolytes across the room, mentioned to me that he would look a lot better if he didn't dye his hair.

I believe the fashion term for this is clocking, a verb I have never used, though I might have almost used it once or twice when talking of clocking someone because they had irked me to the point of physical violence, though the only physical violence I have ever done has been to myself, when walking into a glass door or jamming my leg in a tennis net, at high school, trying to vault over it as if I was an athlete.

Broke a leg that time.

This clocking, I am told, happens whenever someone enters a room.

Your truly talented and skilful clocking woman - and I think I am correct in restricting this tremendous talent to women - clocks the room entrant from head to toe in a millisecond; no detail is missed.

Men are clocked in a different way, and as this is a family newspaper, I will leave this different way purely to the imagination, hoping only that such imagination is mature.

And maturity is what dyeing hair is all about, let's not dress it up in any other clothing. I gazed with incredulity at the man my friend claimed from 30 paces possessed falsely-coloured hair.

Why had he dyed so darkedly, I wondered, when grey, or in my case, silver, is a so much finer look, a look of steaming wisdom and high intelligence, a more MATURE look.

I can openly admit without even a hint of untruth that I have been dying my hair silver since high school.

I was hugely immature at high school, but by dyeing my hair silver, I escaped ridicule and playground bullying, I was seen as wise years ahead of my time.

Teachers, just before they caned me to within an inch of my life, often asked me questions about where were we all going, what's it all about REALLY, and, most often, where were they going wrong in their relationships.

The Silver Fox has been enormously respected for centuries.

Would television's premier interviewer Michael Parkinson have been as respected with curly ginger hair? Of course not, not for a second.

And yet immaturity has so much going for it also. We need look no further than music. All the best rock songs are written by dysfunctional youths with bad skin.

The Pete Townshend who wrote with savage beauty on philosophy (‘‘I hope I die before I get old'') and the tragedy of the deformed (‘‘Happy Jack wasn't much, but he was a man'') was 10 times the writer who droned on 25 years later about his flaws, faults and flagrant inadequacy.

Of course, by then he had no hair to dye. Bono, at least, acknowledges immaturity.

He was 40 when he wrote Beautiful Day for U2, one of the great modern pop songs.

Only a dysfunctional youth with bad skin, gazing across the high school classroom at the gorgeous but unattainable girl of his dreams, could ever write such an immature - and evocative - line.

I am almost certain Bono dyes his hair.

I have retained the Silver Fox look for many decades now.

L'Oreal are still in the marketplace primarily through my unrelenting support of their still-very-reasonably-priced product.

The company sends me wine, all the way from Paris, every Christmas, and I respond by mentioning them ever so occasionally in this column.

I have dabbled in a number of shades - Grey Ash Blonde helped me through university - but the ironically-entitled Cool Silver has remained the favourite.

I am frequently consulted in inner city cafes for pronouncements on life's emotional vicissitudes, and I have spoken from a lectern in public more than once.

Nobody suspects there is curly ginger hair and howling immaturity underneath.

Respect the man who dyes his hair: condemn the clocker.