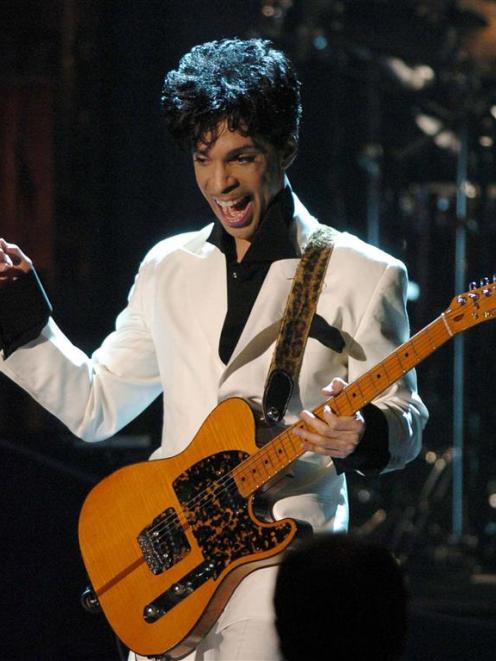 But as I read on I see he will be seated meekly at a piano, singing his songs.

Great as those songs are, the Prince that wrumbled our collective crinch back then was a man who put on a real show, with thousands of people singing and playing around him as he ran all over the stage, squawling his guitar and dancing as if triple-jointed.

Prince has had not one but two hip operations, and a velvet-covered piano stool is now his stage.

At least it will be cheaper, I thought, just one man and a microphone.

If you want to sit down in a good seat and watch Prince sitting down in Auckland tomorrow night, it will cost, according to Grant Smithies in the Sunday Star-Times last week, $389.

I have been musing on this for some time.

Smithies did no musing, he slapped his wallet down on the table in a thrice.

It was Prince, after all.

I can see that.

But the moral here, surely, the one you come to after sustained musing, is the phenomenal peril of dancing.

So we rock'n'roll punters have to pay for that, just like punters are now paying annually for Leonard Cohen as he treks around the world trying to recover the money he lost from his duplicitous swine of a manager.

Imagine if Prince had never destroyed his financial and physical life with dance! It bears thinking about.

I have loathed dancing all my life.

And as a result of this, my hips are regularly shown to final-year medical students at Dunedin Hospital as examples of bone perfection at its most perfect.

"Were we able to reproduce and transplant your hips,'' a leading hospital figure confided to me over coffee in the Octagon recently, "then the world would be a much hipper place.''

I think standard 4 was my first introduction to dancing, the Scottish country kind.

He had us at it all the time, skipping up and down lines and under raised hands to the wheezing emphysema of piano accordions.

I remember vividly reaching out for a new partner in one of those endlessly changing dances and have her hiss: "Don't you dare touch me.''

One night we went somewhere in Pine Hill for a Saturday night Scottish celebration; haggis was promised.

It was certainly that, somewhere between wallpaper paste and seal vomit.

I was sick for a week.

Dancing lessons were promised at Otago Boys' High, and we naturally assumed they would bring in a truckload of coquettish swirly skirted girls from the neighbouring Otago Girls' High, so we all enrolled eagerly.

Instead we had to dance with each other, and in the pandemic of homophobia that reigned cats and dogs in mid-'60s boys' schools - still, if recent reports from Auckland Grammar are to be believed - being seen in the school gym dancing cheek to cheek with another boy finished you good and proper as one of the cool kids.

High school Bible class dances were fine for some, but for the ones who did not wish to dance and lacked the alternate skill of sauntering across the floor and plucking out a girl with a sultry lower lip for torrid wriggling outside the hall, and yes, I was one of those, they were bleak affairs.

At our Roslyn Bible class dances, I made sandwiches in the kitchen, never emerging.

I guess I was hoping that at the end of the evening a girl with a sultry lower lip would seek me out and compliment me on my sandwiches and ask me to walk her home.

On Thursday next week I will see the wondrously fine Nadia Reid and Tonno at the Grainstore Gallery in Oamaru.

I bet they both have perfect hips.