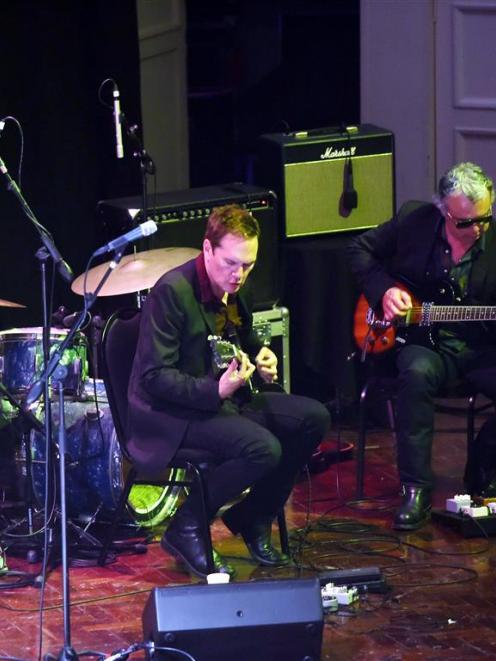 It's all improvised, says Larry David, a genius, let's not be mistaken about THAT.

But Curb just can't be improvised, there are too many story-lines, too much structure.

Full credit then to Dr Margo Barton, Professor in Fashion at the Polytechnic School of Design, who bravely plucked the Kilgour brothers, Shayne Carter, Michael Morley and Robbie Yeats, Dunedin Sound legends all, from the undemanding comfort of local bars, where the latter three have recently been stellar, loud, unpredictable, to play behind the Emerging Designers Fashion Show at the Town Hall last Thursday night.

The brief, although there was barely a brief, brave again, was that it was time Dunedin fashion and the Dunedin Sound got together.

The two have, after all, done awfully well globally.

But a fashion show catwalk? That was an entirely different pan of beans for these five.

They would have to be on their game from the first beat, no gradually getting a groove in a bar with whatever musicians use these days to make things hum, field mushrooms, beer, broccoli, I have never known.

It was my first Emerging Designers show, and I was fascinated to find how this would work.

Loud, yes, but there were ear plugs in the goodie bags.

I am constantly surprised, triumphant really, when the rough backs-to-the-audience jangled distortion of the early '80s Dunedin Sound scores another victory with an audience, as in last year's ‘‘Tally Ho'', populated substantially by people who would rarely go to Chicks, or, many years ago, The Empire, except at gunpoint.

Dunedin Sounders can write the songs, no question.

It's nice five of them - augmented last Thursday by a modern-day Foley artist from New York accompanying the Kilgours - can improvise creatively in front of strangers, as well.

The bands were on either side of the catwalk, surf soundscapes on the left and sonic thunder on the right, it was like a pair of Airs On An E String.

Models and musicians both were on foreign soil. Did it work?

Compere Carol Hirschfield said it was the best soundtrack for a fashion show she had ever heard. She said she was blown away.

I fall respectfully at the feet of improvisation, because I once tried it and failed hopelessly.

Many years ago, a couple were staying with us, she a long-time friend, he her partner, a large muscled Maori from the Coromandel, ironically called Boy.

I had a music room then, stocked from penniless musicians at my record store needing to sell everything so their electricity wouldn't be cut off.

I even bought a sitar once. And Boy told me he loved to jam. That's nice, I said, trembling.

One night, late, Boy returned from a local bar with aggressive eyes and said he wanted to jam. We wired up two electric guitars.

Do you know All Along The Watchtower, he asked.

No, I replied. I didn't even know Happy Birthday, I just had quite a few guitars.

So Boy taught me the three chords, well up the fret-board where I never went because I couldn't barre chords.

Just play these three and I'll do the rest, said Boy. And away we went. After an hour or so, fingers sore, bleeding, my ear's ringing from Boy's unrelenting plea to hold it DOWN, I thought it was time to break free, to improvise.

I leaped into the melodic unknown with a flurry of notes and almost-chords. Boy stopped.

He asked me a question using a swear word.

I told him I felt like improvising, just to sort of break things up. It was nearly 3am.

Don't do that, he said, just hold it DOWN.

So I went back to the three chords, never to break free again, never to experience the aesthetic zenith of full-fingered improvisation.

It was great David, Hamish, Shayne, Michael and Robbie held it down last Thursday night. Thanks Margo.

●Roy Colbert is a Dunedin writer.