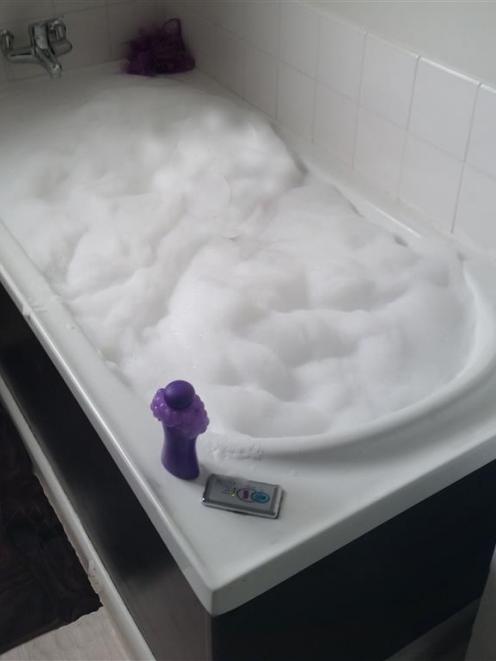 I have written before of the creative power one has when up-to-the-nose sunken in a bath, and when I survey my column schedule for the next three years, I see I will be writing on The Bath quite a few more times.

But nowhere have I scheduled a piece on Creativity Without The Bath, or, as heavily bearded Latin scholars in corduroy jackets refer to it, Wettum Non Cognitum.

A very old friend, Cadaveron Glint, who schooled with me at Tonbridge in Kent many years ago and now lectures in Latin at Oxford, was coffeeing across the table in the Octagon last week, and I noticed his eyeballs slowly disappearing up into his forehead.

Clearly, I was boring him rigid.

"Am I proving duller than a grey sock, Cadaveron?'' I asked anxiously.

I'll warrant I have not once been this bored travelling through a single one of Earth's two dozen continents, and I include the time I did Africa with gaffer tape across both eyes. I would rather eat my own knee than stay here another minute.''

I winced like a tiny crab scuttling behind a rock.

"It is true I am far from my peak,'' I replied with bowed head.

"I can only ultimately pin it down to The Day Of The Slashed Gash.''

And I told him what we called in the '60s the thing of the gig.

We pulled up outside the Roslyn Medical Centre, where I had been summoned for a tiny routine test, and, running a little late, I stormed impatiently from the car rather than alighting daintily, as is my wont.

Forgetting, and not seeing, that my right leg was between the door of the 2003 Toyota ist and the car, I whanged the bottom corner of the door into my leg.

I know nothing about car doors, but I can tell you unequivocally that the bottom corner of a 2003 Toyota ist is viciously right-angled - why aren't they round at the bottom, like, I presume, all other Toyotas? - so the pain and blood was, 'ow you say, extensive.

I also winced like a tiny crab scuttling behind a rock.

Fortunately, I was outside a medical centre - I would have bled to death unattended at A&E - and within minutes I had a nurse sewing me up, while a quartet of doctors and physiotherapists sponged blood from the centre's previously immaculate waiting-room carpet.

After 10 years of prednisone, my skin is the thinth of wet cigarette tissue paper, so applying 30 or 40 stitches was, what they call in medicine, a job and a-half, Jimmy.

"Don't worry, I was a seamstress at high school,'' she replied.

So I was pretty much fixed up good in little more than an hour.

"But I have to have regular baths or my brain turns to goulash,'' I protested.

January was like water torture, except there was no water.

I sat in front of the telly not understanding a single word, just looking at my watch every minute or so to see if it was the next day.

For 56 days I have gone without a single bath, ergo, not a single thought worth more than a jot of sand.

Nearly a hundred coffee guests have fallen asleep right in front of my eyes in prestigious inner-city cafes.

The surge of dopamine, the good stuff, that roars from my central nervous system the minute the hot tap goes on in the bath is but a did-it-ever-happen memory.

But tonight is the end of the eighth week, the bandage will be flung across the bathroom floor like a dull grey sock, and I will re-enter Thought Water, Latin wordplay and advanced thought.

I am tremendously excited.