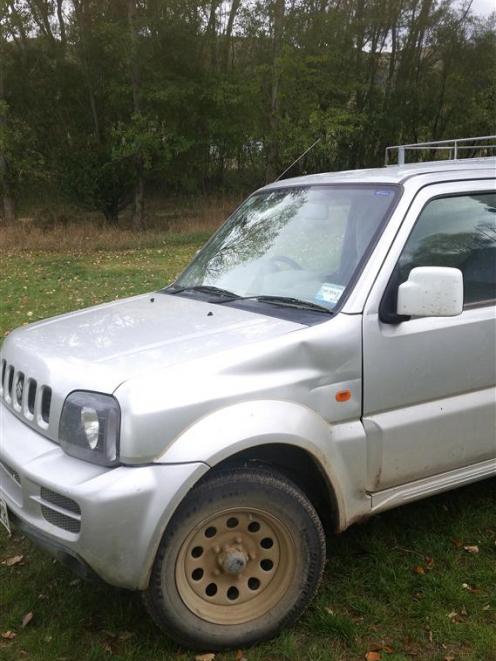 The dented ‘‘CUC’’. PHOTO: SUPPLIED
Patience, as the cliche goes, is a virtue.

But there is no virtue in the modern world.

Virtue may have pushed the storyline along in Shakespeare's simple time, but that was a simple time, not the violently fiendish and devious time we live in today.

Most rational thinkers would agree impatience is now the starter's gun we leap at, we are a nation of rapacious reactors, we have a rage for everything.

All the more remarkable then that I have remained a patient man through all this modern madness, a man whose middle name would in fact BE Patience were it not something else far worse and the cause of much emotional bullying at school.

Constant readers will know instantly I am talking of The Red Letter Box, which I wrote far too much about five years ago, how the original crooked one I built from scraps in the woodpile, painted red, and wedged into a hole in the holly hedge, was inexplicably replaced by a brand new red letterbox from Christchurch, designed for one of those brand-new houses with paper thin walls, the kind you can eavesdrop in from two floors below.

Our house is an old villa, 120 years old and counting, walls as thick as a mammoth's hide.

But, mercifully, it has been almost whanged from its moorings a couple of times, and as the world's only remaining patient man, I have waited wordlessly for someone to hit it one more time so I could replace it with the crooked wooden one in the basement.

I have even offered cash for close personal friends to finish the box off, but none of them want to disfigure their cars.

Easter in the Ida Valley was its usual erratic self beneath Maniototo's unrelentingly beautiful skies.

There were 18 there in all, and three dogs.

Quite a few dishes to be done, and yes, I am that dish-washer.

But a patient man never complains.

A septet of teachers fronted, so there was some inevitable shop talk.

A wag said it was like the staff room with dogs, but I have never had much time for wags; they are quite a negative breed as a rule.

And there was also the things that always happen at the Ida Valley, like the neighbour Barney whirling into the front yard in his, what do you call those things, I know nothing about cars, a sort of ute with a cage on the back, a caged ute car, a CUC, pronounced cuke.

And Barney always parks so he can converse through a rolled-down window on the driver's side, facing north.

Nobody, in fact, knows whether Barney is tall or small, as all we have ever seen of him is from the shoulders up.

So we discussed dairy farmers, which Barney is not. He has little sympathy.

They know nothing about bloody struggle, he says; what about when we had interest rates at 24 or 25 bloody percent?

You just bloody scrimp along, he says. Barney hasn't drunk alcohol for 36 years. He hasn't missed it.

He says he can get silly as a rabbit on a bottle of Coke. Tobacco? Not for 32 years; reckons he's saved two hundred grand.

But last Easter Barney parked in the opposite direction, and I saw the other side of his CUC for the first time. It had a huge dent.

‘‘Is that a huge dent on your CUC, Barney?'' I asked solicitously.

Barney, it turns out, is a patient man also.

He said there is no hurry to go into town for a new panel.

And as patience can, ever so often, equate to virtue, if, like Barney, you have traditional values, then he would surely help a friend if asked.

‘‘Barney, when you come into town, if I gave you a bag of cash, would you mind whanging into our dented red letterbox with your dented CUC? Would you in fact knock it right out of the bloody ground?''

Patience may struggle for virtue, but it is always rewarded.