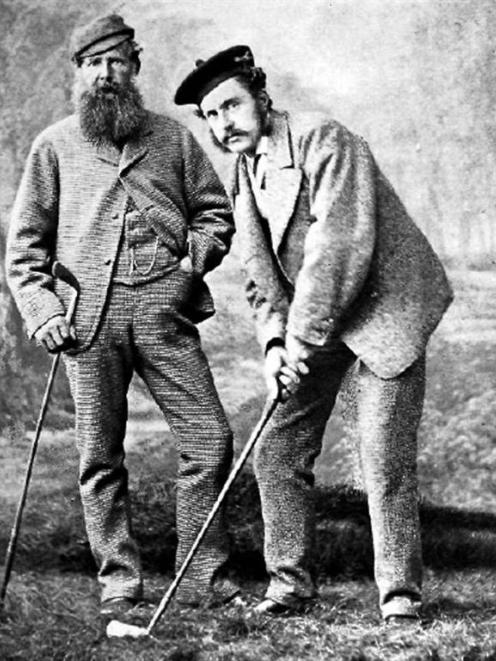 Golfing pioneers Old Tom Morris and Young Tom Morris about 1870-75. Photos by Gary Newkirk-Allsport/Wikimedia Commons.
In recent years, there has been a shoal of new sports either added to or withdrawn from the Olympic Games.

Such has been the level of corruption in sport over that same period, one can only assume money has changed hands hugely, for some of these decisions have simply made no sense at all.

The modern Olympics began in 1896, in Athens, when there were just nine sports, all of them confined to individuals.

I am still old-fashioned enough to believe team sports have no place at the Olympics, sorry to our 1976 men's hockey team, or the Sevens squad we will be sending off to Rio this year. But team sports are being added all the time.

At this rate, apart from destroying poor countries like New Zealand with impossible fundraising demands, you might finish up with the climactic 1500m being fought out between countries, not individual runners; fun for the television watchers counting every runner, maybe, but nonsense as well. 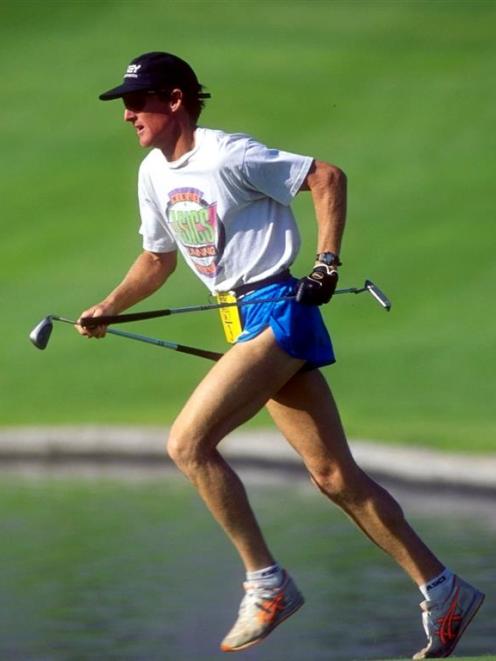 Steve Scott in the 1993 Powerbar Speed Golf Tournament in California.
These thoughts swept over me last week when I read of the New Zealand Speed Golf Championships, and I suddenly realised what a magnificent Olympic sport this would be.

It fits every modern ticked box.

All sports are becoming stupider and faster, the sponsors and the advertisers want nothing less.

Look at what has happened to cricket, where 50-over games were first seen as barbaric slogging, 1970, but by 2010 were seen as being far too slow, only twenty20 could pull the crowds.

Wham bam thank you ma'am is the only way for hitherto long and slow games like cricket.

And golf, essentially unchanged since Old Tom Morris a few hundred years ago.

The cliche snort of derision for watching golf is watching paint dry.

But this is wild hyperbole.

Golf is actually as boring as paint before it is even taken from the tin.

It is known behind closed doors that the list of tortures available at Guantanamo Bay would have included watching a five-hour round of golf on television, except President Obama, who worships the game, shouted Congress down.

I also worship the game, and while I would be the first to admit golf was invented by Satan, not Old Tom, I at least can see the pure joy in a round of golf, even though I have never had pure joy on a golf course.

The sublimely successful international tournament-winner Greg Turner was at my side, and I think from memory we both parred the 8th hole after a teeth-clenching tussle.

We only played nine holes because I was two months shy of a kidney transplant operation and had the energy of a sleeping blowfly.

BUT Arrowtown is a helluva course, described in the Sunday Star Times last week by renowned course architect and brutal course critic Tom Doak (Confidential Guide To Golf Courses) as one of the very finest in the country, his favourite from his recent visit to update his popular guide.

Incidentally, ODT cartoonist Tremain has played Arrowtown since birth, and has been known to shoot in the low 80s when the ball isn't bouncing erratically off the rocks and the concrete fairways, though his people have confided to me behind cupped hand his condition usually gives out on the second nine.

Think about speed golf. It is tremendously fast - the world record is 29 minutes - and it also involves a very high degree of skill and stamina, the more strokes and minutes taken, the greater chance of a winning low score.

The best ever achieved in competition is 109.

Former world record miler Steve Scott once roared around in 29 minutes, but took 95 strokes for a score of 124.

And while golf is the most rigid game of all for viciously unfair rules and phenomenal penalties for tiny errors, speed golf again would wash all that away as competitors, playing under stress at high speed, would scream abuse at match referees and opponents just like McEnroe and Connors used to in the similarly well-behaved and austere world of tennis.

Which would be just great television.

And television, sigh, is all that matters.