Fairness the hallmark of our country 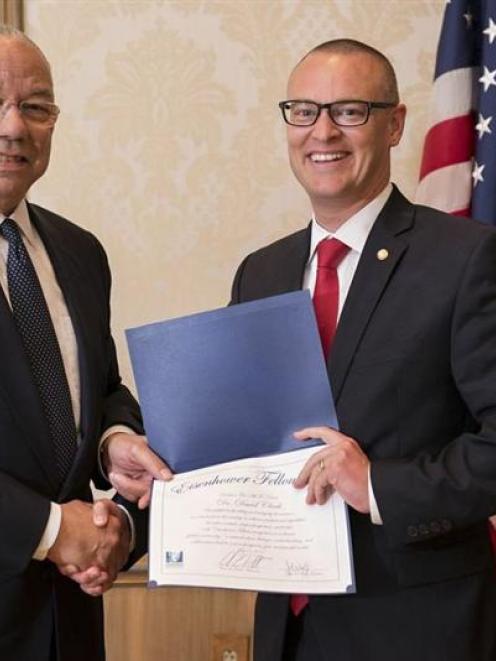 If you believe New Zealand's egalitarian dream is dead, I want to argue that belief in its underlying principle of fairness is the single most important determinant of our country's future.

I have just returned from an Eisenhower Fellowship exchange trip to the United States. What a remarkable opportunity. I've spoken with other Kiwi politicos who reckon such a study trip early in a political career pays dividends for a lifetime. I've a sense that's true.

I learnt many things. One of the most important was a better understanding of why ''fairness'' has been, and continues to be, such an important value for New Zealand.

New Zealand's values system contrasts with the United States in that there ''freedom and liberty'' dominate. Our greater emphasis on ''fairness'' and the US' belief in the primacy of ''freedom'' have a lot to do with historic timing. British colonial history shaped our history.

Those who colonised the US escaped political and religious persecution as well as hunger. To them, the right to express and live one's own beliefs was of paramount importance.

By the time New Zealand was colonised, Europeans had a different view of the world. And the arriving European minority encountered effective warriors in the Maori people.

A bid to establish partnership not only fitted with an emerging European cultural view of the time, it had a strong pragmatic driver.

While we have often failed to live up to our own publicity, a test of fairness remains our culture's most important measuring stick - at least for the silent majority.

So how do these contrasting cultural values play out? The United States' ''live and let live'' attitude allows today's Amish to have happy and fulfilled lives in old-fashioned dress, riding horse-drawn buggies, off the grid. But it also tolerates homelessness to an extent few Kiwis could abide.

In New Zealand we want a fair go for all, but our weakness is that we are also a little too suspicious of those who have made the most of their opportunities.

Personally, I prefer the values set we have in New Zealand over that which dominates in the US. Citizens in other countries envy the lack of corruption, the valuing of justice and the happier overall population that result from the primacy of ''fairness'' in our value system.

I claim no particular originality in this view. Others have explored these cultural values sets before me. Indeed, themes David Hackett Fischer's explored in his book Fairness and Freedom resonated for me throughout my visit.

But I came away from the US very keen to emphasise the importance of fairness to New Zealand's future prospects.

Internationally, our values set is admired. During my travels I heard tell of other nations' gratefulness for New Zealand's speaking its mind in international forums.

Where others feel compelled to compromise for strategic or political reasons, New Zealand's status as a proudly independent nation brings its own kind of freedom. We speak our minds.

Our gritty determination to pursue fairness in international negotiations has cut through. It gives us an advantage. Because we're admired for our sense of fairness, we find ourselves playing a bigger role in multinational negotiations than our size would predict. And it is always valuable to have a seat at the table.

I am convinced by the late Sir Paul Callaghan's view New Zealand's success is built upon a reputation for being a place ''where talent wants to live''. Given that the thinking world already admires our ''fair'' culture, its pull should not be underestimated.

If we wish to become a more prosperous nation, we need to strengthen our reputation for fairness, not undermine it. A growing gap between rich and poor makes New Zealand a less attractive destination for talent.

The research popularised by bestselling book The Spirit Level shows that wealth matters for happiness, but only up to a point. Beyond a certain income level, population happiness and wellbeing improve with a more even spread of wealth.

To make New Zealand a more attractive place for talent to live, to ensure we continue to have a privileged place at the table in trade negotiations, and because it fits with our national identity, our country needs to adopt policies that create a rising tide that really raises all of the boats, not just a privileged few.