The good, the bad, the ugly 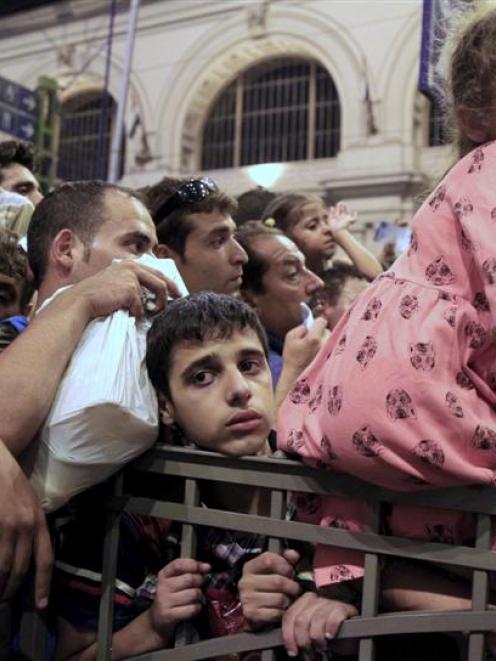 Migrants jostle for positions this week to board a train for the West from Budapest, Hungary.
Refugees from the wars of the Middle East are pouring into the European Union at an unprecedented rate.

So are economic migrants from Africa and non EU countries in the Balkans (Serbia, Bosnia, Albania, etc), and some of them claim to be refugees too.

They are coming at the rate of about 3000 a day, mostly through Turkey into Greece or across the Mediterranean to Italy, and the EU does not know what to do about it.

It is not really that big a refugee crisis: one million people at most this year, or one fifth of 1% of the European Union's 500 million people. Little Lebanon (population 4.5million) has already taken in a million refugees, as has Jordan (pop. 6.5 million).

But while a few of the EU's 28 countries are behaving well, many more have descended into a gibbering panic about being ''overrun''.

It really is a case of the Good, the Bad and the Ugly, and the best of the Good is Germany. Chancellor Angela Merkel put it bluntly: ''If Europe fails on the question of refugees ... it will not be the Europe we imagined.''

She has put her money where her mouth is: two weeks ago she predicted Germany would accept asylum claims from 800,000 refugees this year.

She also said Germany was suspending the ''Dublin regulation'', an internal EU rule that says refugees must seek asylum in the first EU country they reach. 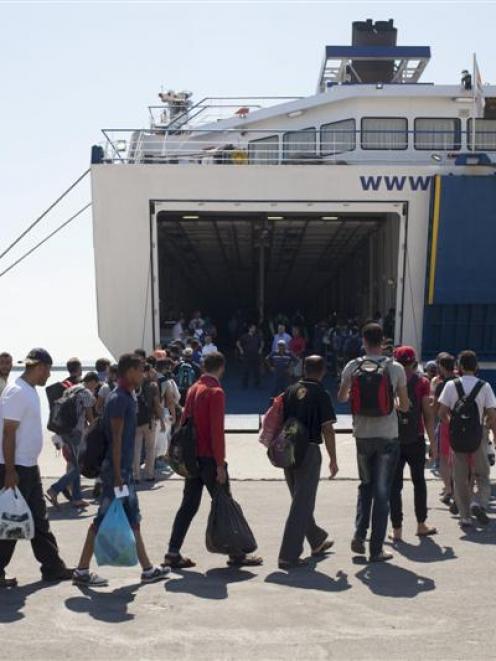 Refugees and migrants line up while boarding a passenger ship heading to the Greek port of Piraeus. Photos by Reuters.
That is manifestly unfair to Greece and Italy, so Berlin will now allow all Syrian refugees to apply for asylum in Germany regardless of where they entered the EU. Moreover, it will regard Syrian citizenship as adequate evidence that people are genuine refugees.

France, Italy and the Netherlands have also been fairly generous about granting refugees asylum, and quiet, gallant Sweden is accepting more refugees per capita than anybody else in the EU. But the good news stops here.

Most other EU countries are refusing to take a fair share of the refugees, or even any at all. Let us define the Bad as those governments that really know they should be doing more, but are shirking their responsibility for domestic political reasons.

The most prominent are the United Kingdom and Spain, which played a key role in sabotaging an EU meeting last June that was trying to agree on a formula for sharing the refugee burden fairly among EU members.

Prime Minister David Cameron's problem is that overall immigration into Britain is high (330,000 last year), which has infuriated the right wing media.

In fact, more than half the newcomers were citizens of other EU countries (who have the right to cross borders in search of jobs), and only 25,000 were refugees _ but such fine distinctions have little place in the public debate. And in Spain, there is an election coming up.

Then there are the Ugly: the countries that simply do not want to take in refugees because they are different from the local people.

Like Slovakia, which said that it might take a few hundred refugees, but only Christians, or Hungary and the Czech Republic, which are both talking about deploying armed forces on their borders to keep refugees out.

All these countries lived under Soviet rule for two generations, which was almost like living in a cave. They have almost no experience of immigration, and it is commonplace to hear people make racist or anti-Semitic remarks without the slightest sense of shame.

In a way, they are still living in the 1950s. It is not an excuse, but it is an explanation. So how, in these circumstances, is the European Union to agree on a common policy for sharing the burden of caring for the refugees?

''We must push through uniform European asylum policies,'' Angela Merkel says, but the EU operates on a consensus basis, and there is little chance that that will be accepted. In practice, therefore, the burden will continue to be borne by the willing.

In an attempt to lessen the burden, the German chancellor has proposed a list of ''safe'' countries (like the Balkan ones, which account for 40% of asylum claims in Germany), where it may be presumed that most claimants are really economic migrants.

Arrivals from ''unsafe'' countries like Syria, Libya and Afghanistan, where real wars are under way, would be treated as genuine refugees. But even then, each case must be investigated individually.

''Germany is a strong country and the motto must be: 'we've managed so much, we can manage this','' Merkel said, and no doubt she can get through this year without changing course.

But there is every reason to believe that there will be another million people risking everything to make it across the EU's borders next year, and probably for many years thereafter. It may even get worse.

Nobody has the slightest idea how many refugees that will generate, but it is likely to be many times the current flow.