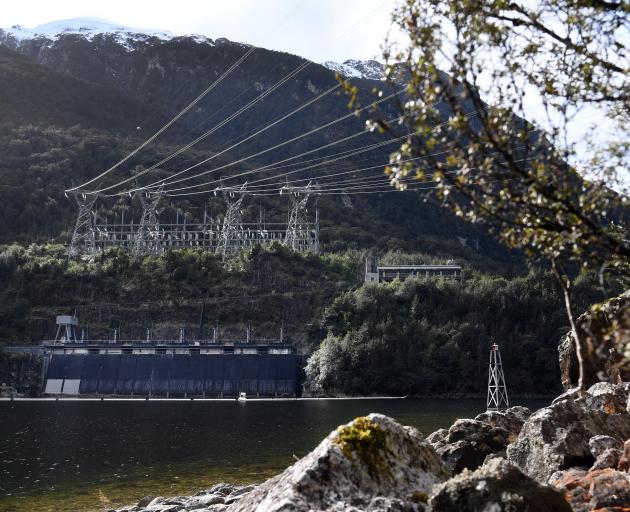 The Manapouri power station. PHOTO: STEPHEN JAQUIERY
Plans for a hydrogen plant in the South are a waste of time and energy, writes Philip Temple.

The boosters are at it again, attracting the interest of foreign investors always eager to find a new place to splash their cash and suck the profits offshore.

This time it is the chimera of a green hydrogen plant to use the ‘‘surplus’’ Manapouri power if the Tiwai aluminium smelter shuts down in three years’ time.

Hydrogen is being touted as a clean source of energy that would power road transport. But it would be the least efficient solution to reducing our carbon footprint and a wasteful use of Manapouri electricity.

First, hydrogen is a place to store energy, an energy vector, not a source of energy.

‘‘Green hydrogen’’ is obtained by passing an electric current from a ‘‘renewable’’ generator through water, breaking the molecule of the liquid (electrolysis) and separating hydrogen from oxygen, without other emissions.

The first issue is that hydrogen needs a high level of electricity consumption to produce. The best electrolysis plants achieve a performance of 70%, meaning 30% of the energy is lost and does not accumulate in the hydrogen molecules produced. But this best performance only occurs under ideal conditions and with very sophisticated and costly plants. More realistically, the yield is about 50%. The other 50% of the energy is simply lost.

Secondly, the efficiency of hydrogen engines is low. Hydrogen can be burnt directly in a petrol engine but then only 15% to 20% of the hydrogen energy would be used (that is, only between 7.5% and 10% of the initially generated electrical energy).

Even by using the most efficient fuel cells (and making the engine more complex, because a battery is also required) the performance is around 50% (that is, only 25% of the initial electrical energy used).

By comparison, an electric motor directly driven from the grid (such as in an electric train) has efficiencies that are consistently above 75% or 80%. Hydrogen is more useful in providing industrial heat, but not in replacing diesel engines in our fleet of trucks and heavy machinery.

Then there are the very real storage problems. To achieve an acceptable volume energy density, hydrogen must be contained at high pressure. This is generally 750 atmospheres (this is the pressure at a depth of 7500 metres under the sea) in order to have an energy density that is only half that of natural gas at normal pressure.

These high pressures require additional energy to compress it and containers with exceptionally dense walls (more costs). It also must be refrigerated before compression to avoid the temperature rising too much (more energy expenditure). Let alone the dangers posed by a crack or a moderately strong impact on the tank. Hydrogen escapes easily from any container, even one with dense walls and well sealed. Losses of between 2% and 3% per day are normal, which implies that hydrogen has to be consumed within a few days of production.

Finally, hydrogen corrodes steel. In carbon steel tanks and pipes, hydrogen forms hydrides which over time make them brittle until they break. The solution is to cover them with special films called liners, but these are not without their problems (they withstand thermal contrasts and mechanical stresses poorly). Also, they are manufactured with oil, adding to the carbon footprint.

Oh, and then building and maintaining the entire hydrogen plant would consume massive amounts of fossil fuel products and create significant CO2 emissions. And oh, more energy would be required to purify the vast amounts of water needed.

The reality is that the energy losses of converting electricity to hydrogen for any energy use are large, ranging from 50% for production of hydrogen to be burnt immediately, to losses of more than 95% if it has to be stored under pressure to be consumed a few days later in the engines of trucks.

Even thinking about using Manapouri power for a green hydrogen plant at Tiwai is a waste of time and planning resources.

It would be a shocking waste of renewable energy that would be better directed into the national grid to meet the growing demands of EVs, electrified bulk transport, and future climate-driven hydro-power shortfalls.

Of course authors of novels, children's stories, and non-fiction, an Oceanographer & associated academics have opinions on how they picture the future will turn out but I don't see how the illinformed public demonisation of a technology that is receiving 10's of billions of $ of investment globally from industrialists and professional investors, is at all helpful
The proposed solution to the shortcomings of hydrogen, as they see it, give a clue to the motivation.
"electric motor directly driven from the grid (such as in an electric train) has efficiencies that are consistently above 75% or 80%"
So what is being implied ? Electrify the rail system and move all freight & passengers that way ? Another utopian dream that doesn't look beyond 100km of the main trunkline and what would that cost ?
What happens when there is an earthquake or a landslide or a tsunami, that takes out the line ?
As for the negatives exponded about hydrogen, they are far from accurate !
Hydrogen is best stored and moved as NH3 (ammonia)
If you are losing "2% and 3% (H2) per day" get some new kit !
Electrolysis energy losses can be repurposed !
20% can be added to natural gas with no issues !

Hydrogen is best stored and moved in its most common compound. Water.

Not to mention bulk shipping at absolute zero is an incredible complex proposition thats not currently possible. At least ten years before a commercially viable shipping option becomes available.. much better to feed power directly to all of New Zealand to reduce the growing number of families who cant avoid to heat their homes.

By all accounts it would make more sense to store, transport and utilise hydrogen in the form of ammonia, with which the fertiliser industry has over 100 years' experience. This would ameliorate many of the issues raised here.

This opinion piece fails to address the huge expense in getting the electricity to the market which is predominantly in the North Island, the environmental damage from resourcing the lithium and components used in fuel cells, and disposal of spent batteries.

Many countries are making huge investments in green hydrogen production by constructing dedicated wind farms and solar arrays. Are they all wrong?

True that, why would you waste so much energy converting it from one form to another when you could simply connect Manapouri to the grid. Then you could use all the money saved to give away solar and insulation to the general population, develop smarter grids, and increase the rapid charging network. Less pollution, less cost, more efficient.

Sadly an out of date view that ignores the research being carried out internationally. Hydrogen is the best option we have and at least it doesn't decimate thousands of hectares of land digging up the limited supply of rare metals needed for batteries.

Cobalt is a major issue, mined by an exploited population that sees little of it's value
It irritates me when protesters make a fuss over something they dislike but look the other way when it suits their narrative
Maybe they should watch this before they call up the ODT on their mobile phones looking for public acknowledgement of their virtue signalling. It's from 2016, before all the crazed hype on EV's
https://www.washingtonpost.com/graphics/business/batteries/congo-cobalt-...
Fuel cells have many advantages regarding resource requirements and range
https://www.toyota-europe.com/world-of-toyota/electrified/fuel-cell/what...
They can also be used as a backup electrical source when the grid is down which is really useful if you live in Califorinai or China
or lots of other places
Our society is much more complex than the average, much revered, opinionated, scientist, academic or politician knows and their meddling is of great concern to me
Technology development is the domain of the engineering types and consumers get to select the winner
Investors take a bet on who they think will win
That is how it should stay !!!

One estimate is that we will need more copper in the next 30 years than we have used in the last 3000. I wonder if there is that much left. Rare metals in the average ICE car 15kg; average in an EV 200kg!