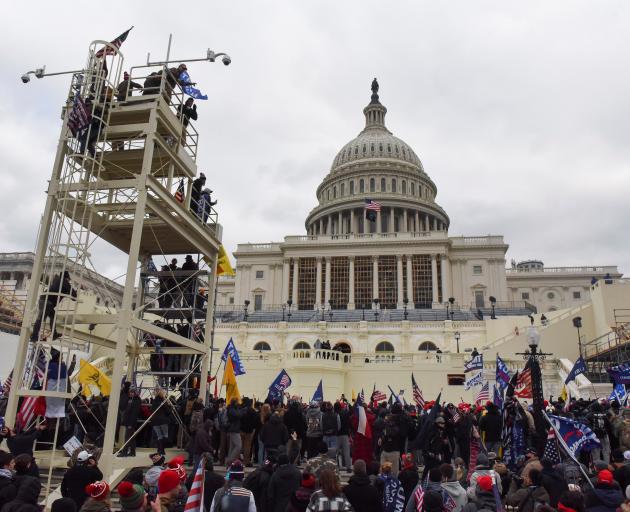 Supporters of US President Donald Trump gather in Washington, January 6, 2021. Photo: Reuters
Is there a connection between the anniversary of the storming of the US Capitol on January 6 and the Christian commemoration of Epiphany on the same date? Graham Redding considers the possibility.

January 6 will be the first anniversary of the storming of the United States Capitol by Trump loyalists.

The attempt by the president of the United States to thwart the transition of power after an election defeat rocked the foundations of democracy in the Land of the Free. Shockwaves reverberated around the world as we viewed with disbelief scenes of violence and mayhem at the centre of the world’s largest democracy. They still do. The extent to which Donald Trump and his loyalists and sections of the media perpetuate the lie of a stolen election is truly staggering, as is the extent to which the Republican Party endorses the lie in its pursuit of power.

January 6 is also the date upon which the Feast of Epiphany is celebrated in the Christian tradition. Epiphany commemorates an event narrated in Matthew’s Gospel about a group of Magi, or wise pilgrims from the East, being guided by a star to Bethlehem, where they pay homage to the newly-born Christ child.

What do these two events have to do with one another?

The clue, I think, lies in the backdrop to the Epiphany narrative. Matthew tells us that King Herod, the Roman-appointed ruler of Judea, perceived in the birth of Jesus a threat to his rule, so he secretly summoned the Magi and ordered them to let him know when they found the new-born child so that he might come and pay homage too.

It was, of course, a lie, which the Magi saw through. Matthew tells us that Herod, infuriated by the disobedience of the Magi, ordered the killing of all children in and around Bethlehem who were under 2 years old. This is known in Christian folklore as the Massacre of the Innocents.

King Herod is known in history as Herod the Great because of the length of his rule and his impressive list of achievements, including the consolidation of Roman rule in Judea. But there is often another less visible, darker, side to greatness.

Matthew’s portrayal of Herod as a ruler who is insecure, paranoid, cynical and ruthless, driven by his lust for power, and determined to hang on to power at all costs, is a familiar story. World history is littered with such rulers and wannabe tyrants.

Meanwhile, the Magi cautiously go about their business, refusing to be cowed, seeing their journey through to become witnesses of the birth of a new dispensation, a new order, in which the last will be first and the first will be last, and God’s blessing will be pronounced upon those whom the despots of our world trample upon and dismiss as nobodies and losers on their pathway to greatness.

It is little wonder that Matthew’s Epiphany narrative has inspired so much art and poetry over the years, for it is a story that encourages us to imagine a different kind of future to that which is often presented to us in the news headlines and the annals of history.

So, tomorrow, although I will note the anniversary of the storming of the US Capitol and lament the folly that it represents, I will draw inspiration from the Journey of the Magi, perhaps read again T.S. Eliot’s wonderful poem of the same name, and I will behold afresh the mystery and the hope of the One to whom the Magi paid homage all those years ago.

- Graham Redding is the lecturer in chaplaincy studies at the University of Otago and a former moderator of the Presbyterian Church of Aotearoa New Zealand.

The East was Persia, centre of learning and invention.

The worlds largest democracy isn't the USA, it's India.