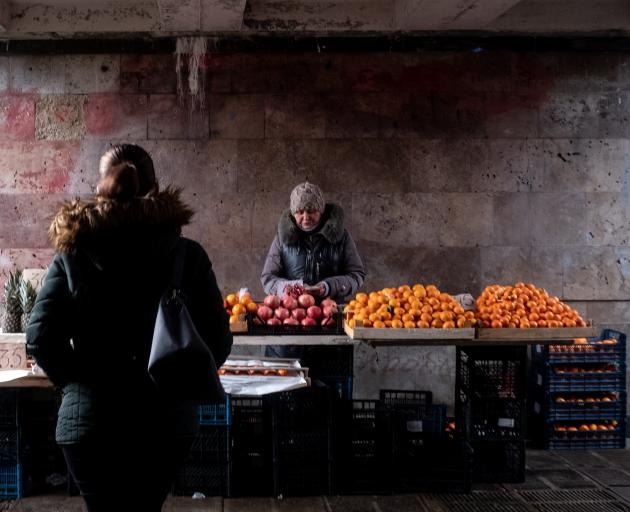 A woman sells fruit in an underground walkway in Kiev, Ukraine. International fears of an imminent Russian military invasion of Ukraine continue to remain high. PHOTO: GETTY IMAGES
New Zealand’s initial response to a possible invasion of Ukraine by Russia is becoming clearer.

Russia has positioned about 100,000 troops close to Ukraine’s borders and the United States says that Russia now has the capability to invade if it chooses to do so. Russia denies it has any such plans.

New Zealand’s foreign minister, Nanaia Mahuta, issued a written statement to media last week that said "we call on Russia to act in a manner consistent with international law and to take immediate steps to reduce tensions and the risk of a severe miscalculation" .

For her part, Prime Minister Jacinda Ardern said in response to a question at her post-Cabinet press conference last week that New Zealand was "deeply concerned" and recognised the need to "further reinforce the sovereignty of Ukraine".

Why should the crisis matter to Wellington — about 17,000km away from Kiev and Moscow?

One reason is that Russia is, like New Zealand, an Apec member. An Asian and Pacific power as much as a European one, Russia lies very much within New Zealand’s orbit: Vladivostok is only a two-hour flight away from South Korea, one of New Zealand’s closest trading partners.

Indeed, Russia is increasingly looking eastwards — in part thanks to the impact of climate change.

Melting Arctic ice means that the ‘‘Northern Sea Route’’ along Russia’s coast is slowly emerging as a new, lucrative shipping route for journeys from Europe to Asia and a much faster alternative to the Suez Canal. As the route becomes more viable, development is likely to accelerate in Russia’s Far East.

Moscow is also enjoying increasingly close relations with Beijing, partly as a by-product of its isolation from the West since Russia’s illegal annexation of Crimea in 2014. China and Russia are planning joint military exercises and in a recent video call, Xi Jinping addressed Vladimir Putin as his "old friend", while Putin described Russian-Sino relations as being at an "all-time high".

Indeed, China’s relationship with Russia is so good that the United States last week called on Beijing to use its influence to try to convince Moscow to de-escalate the crisis over Ukraine.

North Atlantic Treaty Organisation (Nato) allies, especially the United States and United Kingdom, have been unusually outspoken and blunt about the prospects of Russia launching a war with Ukraine. A constant flow of intelligence has been released throughout January to support the view that Russia is planning an invasion.

For instance, on Saturday, Reuters reported claims from US officials that Russia was moving blood supplies for treating potential war casualties to the border. Earlier, on January 14, the US said it believed Russia was planning a false flag operation to create a pretext for war, which was followed by a British statement on January 23 that said Russia was planning to install a puppet government in Ukraine.

These claims should be taken seriously, but raw intelligence should also be viewed with a healthy degree of scepticism. This year marks the 20th anniversary of the release of the British Government’s infamous September 2002 dossier that helped to underpin Tony Blair’s case for war on Iraq. The dossier’s central claims about Iraq’s possession of weapons of mass destruction were later discredited or proven to be false.

Indeed, even Ukraine’s own president seems to be doubtful that the current situation really is as dramatic as the US and Nato are making out. A phone call between Volodymyr Zelensky and Joe Biden last week reportedly "did not go well", with Zelensky later telling reporters "we don’t need this panic ... I don’t consider the situation now more tense than before."

Given the conflicting reports, the fog of war may already be descending. In truth, it is impossible for anyone to know exactly what Putin has in mind over the coming days and weeks. The risk of war is real. Is there anything New Zealand could do to help defuse the current crisis?

The main tool employed by the US and its Nato allies to prevent a war has been the threat of crippling, sweeping sanctions against Russia should it attempt an invasion. As Robert Ayson has noted, New Zealand’s current lack of a formal autonomous sanctions regime means that it would be unable to follow suit, except with some lower-level measures such as travel bans. On the other hand, it is questionable whether Russia would pay much attention to sanctions imposed by New Zealand anyway.

Arguably a more useful role for New Zealand to play would be in the diplomatic space. One of the few positive aspects in the current crisis has been that Russia and Nato have continued to keep lines of communication open. Russian foreign minister Sergey Lavrov and US Secretary of State Antony Blinken met in person in Geneva on January 21. The meeting followed lower-level talks earlier in January and two phone calls between Biden and Putin in December.

One problem, however, is that other than Switzerland, which has provided the Geneva venue for talks, there is a distinct lack of third-parties that can talk credibly to both sides. While Nordic countries — especially Norway — often act as go-betweens in Middle East conflicts, the Ukraine crisis is too close to home. Norway and Iceland are founding Nato members, while Sweden and Finland are now debating joining. Nato enlargement is one of Putin’s central complaints.

New Zealand might also seem unsuited to any such intermediary role. After all, Wellington is under pressure from its Five Eyes partners — especially the new Aukus grouping — to take a more hawkish position towards both Moscow and Beijing. Indeed, New Zealand’s latest defence assessment, released in December 2021, devoted a section to Russia which concluded that it was "undermining the international rules-based system and frustrating collective actions on a range of important issues".

Moreover, New Zealand public opinion of Russia is turning increasingly negative: 42% of respondents cited Russia as a threat to New Zealand in the Asia New Zealand Foundation’s latest ‘‘Perceptions of Asia’’ survey, released in June 2021, an increase from 34% a year earlier. This put Russia in second place, behind only North Korea and seven percentage points in front of China.

Still, as a small state that still has the best relations with China of any Western country, New Zealand has also shown that it has a different outlook on the world to its traditional partners. Innovative ideas for New Zealand’s approach to China that were floated last year by New Zealand academics Nicholas Ross Smith and Reuben Steff could be explored further and potentially also applied to Russia. Smith put forward the idea of New Zealand leading a new "non-aligned" movement, while Steff suggested New Zealand could play a "circuit-breaker role" and provide a venue for talks between "Great Powers" — perhaps complementing the role already played by neutral Switzerland.

Russian President Vladimir Putin. PHOTO: GETTY IMAGES
In this regard, Vladimir Putin’s existing ties with New Zealand could be an asset: it was reported last year that he had spent time in the country in the 1980s when he was a KGB agent.

Putin also made his one of his first foreign visits as Prime Minister to New Zealand for the APEC summit in 1999 — and he was quick to accept an invitation to attend a special virtual Apec summit on Covid-19 that was hosted by Jacinda Ardern in July last year.

Any role undertaken by New Zealand to defuse tensions would need to be heavily improvised for the current crisis. It would also almost certainly need to be undertaken virtually, given New Zealand’s travel restrictions due to Covid-19.

But differences between Russia, China and the West are not going away any time soon.

There will almost certainly be future crises to deal with.

In the longer-term, capacities would need to be built. New Zealand now has a good number of Chinese-speaking diplomats, but Russian skills that were common during the Cold War are now rare. Existing Russian programmes at the University of Canterbury and University of Auckland would be a useful starting point.

No, none of this is easy or straightforward — but diplomacy rarely is.

-- Geoffrey Miller is the Democracy Project’s international analyst and writes on current New Zealand foreign policy and related geopolitical issues. He has lived in Germany and the Middle East and is a learner of Arabic and Russian.