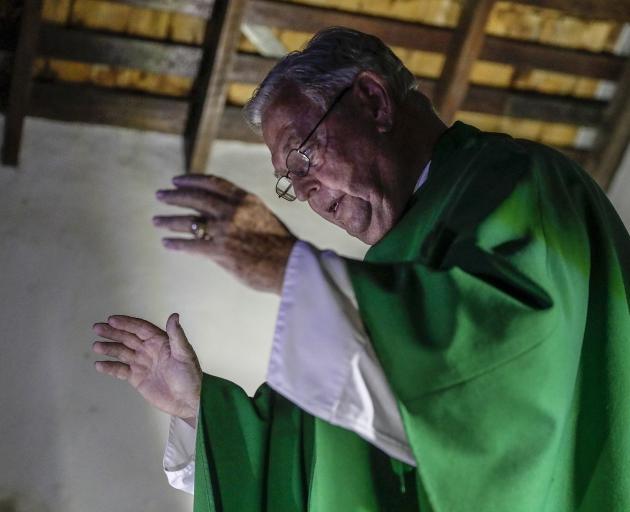 Religion does not provide a battery of stock and slick answers but a framework within which compassion and mystery can be nurtured and celebrated. PHOTO: REUTERS
What are the key markers of contemporary religious faith and practice in New Zealand? Unlike Germany, there is no state support for the churches here. Unlike the US, piety is not worn on one’s sleeve. Attend a funeral or a wedding in New Zealand these days and what springs to mind is the incredible variety of what is on offer.

Celebrants, or even MCs, are more common than priests or ministers. Grief at funerals is not encouraged. Ritual is remarkable for its absence. Recently I attended a pub where Jesus Christ was very much present, but of course in rollicking, unselfconscious expletive form! These days life in New Zealand feels very secular indeed.

Pakeha Kiwis are uneasy about the term religion.

One often hears: "I’m not religious", meaning I’m not, or no longer, a member or adherent of any church. In comparison with the 1950s, institutional religion has moved to the margins, become a niche interest. This does not necessarily mean a lack of interest in spirituality. Spirituality, however, is such a vague term. How far can we stretch it? Would it include, for example, the Santa parade, which is the nearest we come to a traditional religious procession? Thin gruel, indeed!

The old "main line" religions — Roman Catholic, Anglican, Presbyterian, Methodist and Baptist — all tend to be tarred these days with a neocolonial brush, as having their cultural roots elsewhere.

This may partly explain the willingness to accept Maori rituals on community occasions, even when their content is largely Christian. Maori now seems to function, as Latin once did, as the acceptable language for the numinous. One suspects that the widespread loss of the churches’ mana derives not only from recent revelations about sexual abuse, but from lingering, sometimes traumatic memories of religious bigotry and puritanism and narrowness. (Never apologised for, either.) Interestingly, too, that the once vibrant liberal streams in Anglicanism, Presbyterianism, Methodism and Roman Catholicism have virtually dried up as well.

Yet one cannot speak simply of decline. The evidence points every which way. The social analysis and input of the Salvation Army continues to carry conviction.

Kiwi hymn-writers such as Colin Gibson and Sheila Murray rank internationally in the premier division. The religious poetry of James K. Baxter or the art of Colin McCahon remain powerfully resonant. Religious music is an integral part of the offerings of choirs and orchestras and folk concerts.

At the University of Otago, the theology programme is part of the nuts and bolts of the place, unthinkable a few decades ago. Congregations which offer pastoral warmth, liturgical colour, and an openness to the tough issues of the day continue to flourish.

In his Nobel Lecture, Seamus Heaney famously described humanity as "hunters and gatherers of values".

Kiwis very much resonate to that quest, as seen in the remarkable response to Jacinda Ardern’s evocation of "kindness". Traditional Christian virtues seem to re-emerge in new dress. For many Kiwis, however, the loss of traditional church authority and control has proved immensely liberating, not least in the area of gender issues, and in the rejection of the secondary values of respectability and social conformity.

Yet is it not the case that for many the new household gods of career and consumerism and individualism which have elbowed out Christianity have led to a dramatic narrowing of horizons? The banality of daily life tends then to be mirrored in the soulless weddings and funerals which one encounters so often.

Swept clean of religion, the culture is inundated with secular kitsch.

At its best, after all, religion does not provide a battery of stock and slick answers but a framework within which compassion and mystery can be nurtured and celebrated.

The loss of this has arguably left many Kiwis strangely bereft.

After the massacre at the Christchurch mosques, thousands of Dunedinites, including countless students, walked in stunned silence to the stadium.

There they heard the imam’s poignant call to prayer ring out.

For many, no doubt, for the first time. Perhaps Pakeha New Zealanders who have given up on the church will listen to their Islamic brothers and sisters, to the tangata whenua on the marae and the spontaneous worship of Pacific Islanders and hear that poignant note reminding them of what may be currently missing from their lives.

For, as David Fleming puts it in Surviving the Future, "religion is the binding together of people with stories, music, dance, emotion, death, spirit — all really about the celebratory making of community, and real enough to give your heart to."

The circumstances that find religion berated in the west are not exclusive to Christianity, high profile human rights abuses, including sexual abuse and gender discrimination are reported across all the major religions. Religious bigotry, narrowness, punishment for Apostasy, whippings for blasphemy, abuse by religious clerics are regular and on-going issues. We rarely hear of them here in NZ, the media seldom report these incidents unless it’s a most extreme example. These sad incidents are however widely reported on Al Jazeera, and Middle Eastern news channels and also printed in regional newspapers. While other faiths may conjure the allure of exotic glamour, I'm afraid all have dirty laundry waiting in the wings.

Organized religion is the corruption of faith

The major reason I want nothing to do with ANY religion goes back to my experiences as a young child growing up in the 50s and 60s in Dunedin and being forced to participate in religion. Learning all about hypocrisy when I was too young to even know the word existed. Being strapped because I didn't pray, having my class mates total that they should not play with me as I was evil and going to hell and if they played with me they too would go to hell.

Traditional theistic religions have been replaced by the modern atheistic religion of Progressivism, which is complete with its tenets of faith, heresies and excommunication.

Cultures that abandon God tend to end up being ruled by Money and Fear.

I find the Pakeha label simply awful, and inappropriate.

At the heart of NZ society is Christian allegiances. When compared to societies predominated by other religious we strongly disagree with their lack of freedoms, brutality and how women are treated. Further, society now has many social problems as do individuals and counsellors and mental health services, are in high demand - have we not just substituted the tending of the flock or neglected it in modern society? All societies tend to have need for some spiritual guidance as a background within them.

Given that approx 50% of NZers are not affiliated with any religion I'm not sure I would agree with your opening contention. Don't forget it has only been a generation that NZ has had the freedoms you proudly claim. These arose not because of Christian values, they were won with hard fought protests and political struggle, ask any woman over 50 years of age, ask anyone who was routinely brutalized by parents and teachers or molested by priests. These freedoms arose because we are secular, we have separated our govt from direct religious influence. And thank god for that! This country has always had serious social problems. The only difference between now and say 40 years ago is that now they're not hidden, well, not as much as they were. What was routinely hidden is now routinely exposed. Society does not need spiritual guidance, that is just a nonsense. People as individuals need it.

I really have difficulty understanding how maori, for that matter all Polynesian cultures, adopted Christianity so comprehensively.
In the 26 years between Marsden delivering the first sermon and the treaty of Waitangi being signed the church missionary society did an excellent con job on the maori. Also, despite the guarantee of freedom of religious belief written into the treaty the colonial government, as late as 1907 was still passing laws suppressing Maori religion. That law was not repealed until 1962!
I'm amazed that Maori have not returned to their traditional beliefs in more numbers and that so many have clung to Christianity despite the church's role in suppressing their culture since 1814.