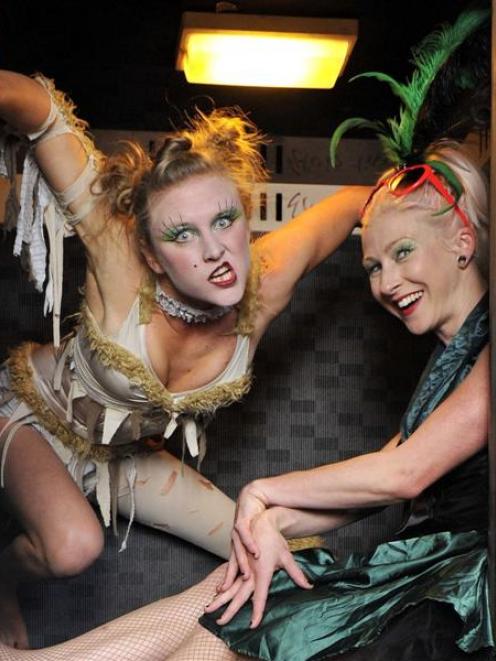 The Butler contortionists (clockwise from bottom) Jola and Nele Siezen and Skye Brobery squeeze into the Otago Daily Times (former Evening Star) lift. They were in Dunedin for the 2010 Arts Festival. Photo by Gerard O'Brien.
A ferocious discussion on phobias in an inner-city cafe last Thursday saw some arresting stuff brought to the table.

I was enthusiastically pointed towards a Dr Howard Liebgold, also known as Doctor Fear, on my smartphone, and immediately sped there with jabbering fingers. What an astonishing man!

I had no idea how mangled by phobias we all are, and how MANY there are.

Enter the words Phobia List into Google, and prepare to be stunned, prepare to have your vocabulary centrupled.

The mother of last week's 9-year-old tonsillectomee had a sub-story phobia about hospitals and medical care. So she was doing it tough. That I was doing it even tougher, dealing to both of them with two different curative cocktails, that most rare of humans in life's restaurant, a fear waiter, was neither here nor there.

The mother had also been an outstanding St John ambulance girl, seriously contemplating a life in that field. Such is the irony of the phobia. I once sat next to a teenager on a flight to Christchurch whose knuckles were white with fear during takeoff. She was on her way to a course to help her become an international air hostess.

A friend I coached at golf could not hit the ball over the hill on the second hole at Belleknowes, a shot requiring a leisurely 7-iron. This wasn't strictly a phobia, but she had turned it into one, and even superb and rational golf instruction, mine, was getting us nowhere. So we turned to mumbo jumbo - hypnotherapy - and she was cured in 30 minutes by a woman called Robyn.

This same friend has a debilitating phobia about buttons, and won't even enter an all-items shop where there might be such things inside. Op shops are out of the question; they have jars of them. Yet, she also buys and wears lovely clothes. Difficult.

My wife has a serious bird phobia, which she claims is congenital, dating back to a Hitchockian moment her mother suffered at the hand of magpies. An altar cloth, hers for the night, was damaged. The nuns at school punished her hard at school the next day. Catholicism's bedclothes are always wide open for the phobic.

I was frequently ordered to close my record shop and rescue my wife from a bird in our three-storey mansion, even though the bird was somewhere upstairs and my wife was curled up shaking with phobia in the clothes drier on the ground floor. She says it is the flapping most of all. Birds came down our chimneys even more often than Santa Claus. Birds can smell phobias.

Our daughter became terrified of lifts after coming into the Evening Star with me as a child. For those who don't know, the lift in the Allied Press building is the smallest on the entire World Health Organisation database. Whenever the telephone box-sized lift clanked, our daughter screamed so loud the smoke alarms went off.

Years later at Roosevelt University's dormitory in Chicago, she found she would either have to ride a very long lift or take 40 minutes walking up stairs to get to her room. She was quickly cured.

So phobias can be fixed, though I would seriously doubt anyone could fix my fear of heights. People will know that feeling that grumbles ominously in the groin when even the fakery of a look-down from a tall building on telly appears.

I have tried self-cure, riding up a gondola in Switzerland without closing my eyes - the incessant cowbells were a powerful diversion - and I went to the top of the Sears Tower in Chicago, 103 floors, although only agreeing to move towards the glass viewing walls on all fours. My wife told the other tourists I was with someone else.

But no, still scared of heights.

I bet aliens don't have phobias. That's why they are much smarter than us. Stands to reason. A world without phobias would run like an incident-free and extremely efficient Swiss watch. You certainly don't get much done furled up in a clothes drier.