Part of the audience at the meeting at the Otago Museum Hutton Theatre. Photos: Gregor Richardson.
Australian examples show that from the start of the planning stage, an entire hospital of Dunedin’s size can be built in four years with a fine result, writes Dunedin North MP David Clark.

Frustration was evident at last Tuesday’s public meeting held to discuss delays on the Dunedin Hospital rebuild project.  Fair enough — I was frustrated too. 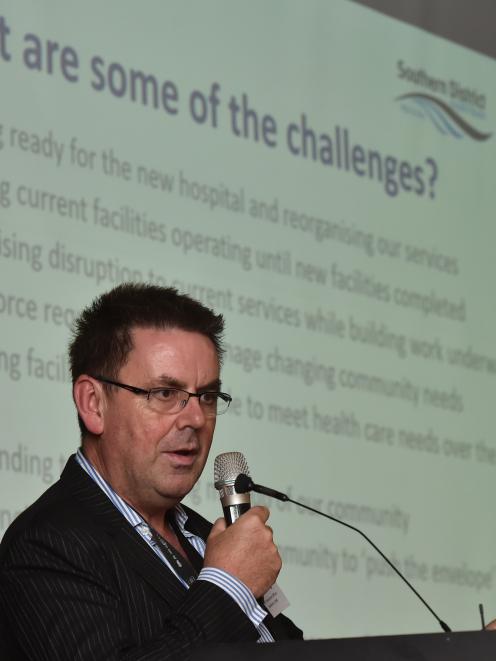 Southern District Health Board chief executive Chris Fleming speaks at a meeting about the Dunedin Hospital rebuild in Dunedin last Tuesday.
The meeting had an inauspicious start. Chairman of the rebuild group Andrew Blair began the meeting by demonstrating that he wasn’t familiar with the names of two of his group’s five members.  The group was established in 2015. This very public gaffe gave credence to the prevailing view that the partnership group doesn’t meet often enough, and thus lacks the urgency required.

Years have passed since I started questioning the Government’s commitment to the timely rebuild of Dunedin Hospital. Before the 2014 general election, I asked then minister of health Tony Ryall when a decision would be made about the Dunedin Hospital rebuild. He said  he expected the issue to be decided when a business case went to Cabinet towards the end of the year.

To date, no business case has been produced.  Unbelievably, the promise of a full business case is now further away than it was in 2014 — when I first grew concerned about delays. This week we were told that Dunedin people should expect an "initial business case" mid-year this year, and a fuller business case in mid-2018.

That is simply not good enough.

Politicians of all stripes agree that a Dunedin Hospital rebuild needs to happen, but unfortunately the current Government has been dragging its feet on committing to timeframes and capital. Their representatives have argued that careful planning, to future-proof the hospital, has caused delay.  This is rot.

No-one is suggesting reckless haste.  And indeed, there seems no danger of that.

Nor is there evidence that planning and execution for a hospital build takes a decade if it is to be done right. Just across the ditch there is plenty of proof  quality can be delivered quickly.  Australia has had a mini hospital building boom over the past decade.  We can learn a lot from reviews they have done of these builds, and from the myriad consultants that have worked on every one of those projects.

Planning doesn’t need to take long, but it does need to be done well. It is imperative that key participating institutions first agree to a common set of goals. In Dunedin’s case those signing up to common goals should include the Government through the district health board, the teaching institutions including the university, and the city through its representatives on the city council.

I have heard examples of this kind of process taking four months in Australia and delivering an excellent result.

Australian examples show that from the start of the planning stage, an entire hospital of Dunedin’s size can be built in four years with a fine result.

The Government’s existing 10-year timeframe is a bad joke.  A BECA Consulting report produced in 2014 remains the most comprehensive publicly available assessment of the existing hospital buildings and the likely options for their replacement.

Frighteningly, little progress has been made since 2014.  Quite the opposite. The subsequent loss of training accreditation at the hospital is well documented, as are the leaks in operating theatres, and ongoing asbestos issues.  The case has become more urgent, but the political will to make meaningful progress is lacking.

In a situation where the DHB is without elected public representation, without clear targets and without regular reporting on milestones, it will be difficult to retain public confidence. Unfortunately, transparency is still lacking. At the public meeting, we were told that the partnership group is one and a-half  years into a process that could take 10 years. In the current government-approved timeframe, the partnership group was allocated two and a-half years to complete the business case. Short of changing the government in September, it seems there is no mechanism to hold them publicly accountable in any meaningful way before then.

I expect the partnership group will eventually secure a central city site for the rebuilt hospital. It is in the university’s interest to facilitate that outcome, and a centrally located teaching hospital is regarded as the gold standard worldwide.

A world-class teaching hospital also ensures a healthy workforce, and secures a prosperous future for our city and the wider Otago-Southland region.

It is a whole lot easier to attract world-beating researchers and teachers to our tertiary institutions when they know training accreditation won’t be held back because of dated facilities, and when they can be confident surgery won’t be postponed because operating theatres leak when it rains.

The rebuild of our hospital is urgent, and the process should reflect that.

A modern level six tertiary hospital must be our starting point.  It’s just not good enough that we are being made to wait for something as basic as a modern, high quality, functional hospital that will deliver 21st-century healthcare to our region.