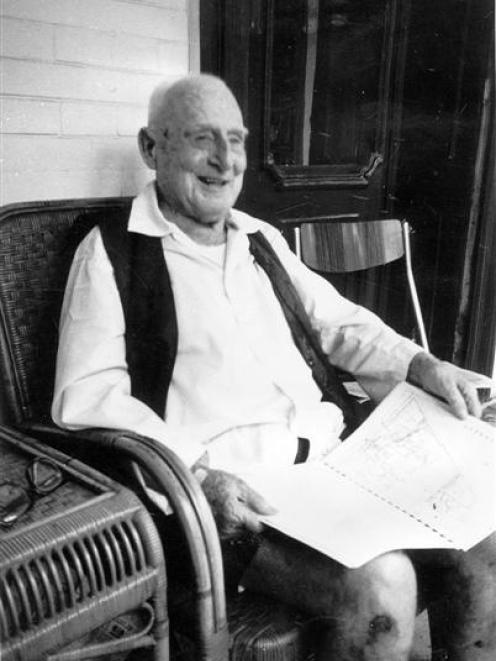 Rewi Alley, towards the end of his life, holds plans for a new school of forestry, agriculture and animal husbandry, under construction in Shandan, Gansu Province, in northwest China. Photo supplied.
Everyone's been Gung Ho about New Zealand's prospects with China in recent days and weeks, not least our Prime Minister.

China, it is reliably broadcast, is the likely source of our future prosperity.

Exporters have been at it, businessmen and women, educators, trade officials; Uncle Tom Cobley and all.

In case the news has passed anyone by, we have a pavilion at the Shanghai Expo to show off our wares and ways to the Chinese, and anyone else who cares to have a look.

And many Chinese people are looking.

In fact, they seem to be rather Gung Ho about it - which is surely a good thing.

But one of the several small ironies of all this is that nobody would be so Gung Ho, or indeed Gung Ho at all, if it weren't for a little-known New Zealander - historically considered persona non grata in certain circles in his own country - who in 1927 went to China where he was to spend the rest of his life, dying there in 1987.

His name is Rewi Alley.

The five-part series is a co-production between China's state broadcaster CCTV, and Dunedin-based production company NHNZ and the Ministry of Culture and Heritage.

The series was due to start screening in China last Friday to coincide with New Zealand's national day at the expo.

"Rewi Alley is hugely popular in China, and New Zealand continues to gain significant benefits from his status as a well-known and highly respected figure," Mr Key said at the launch.

Reinforcing the positive image of Alley, who devoted his life to helping the Chinese, to a combined audience of 300 million people would help strengthen the relationship between the two countries, Mr Key continued.

The reason Alley is such a revered figure in China is he established the Gung Ho ("Work-Together") industrial co-operatives in China at the outbreak of the war with Japan in 1937.

The four principles of the movement enshrined the spirit of co-operation, of love, of hard work and endurance, and of urgency and down-to-earth-ness.

Alley's term has since passed into the English language, given additional currency by becoming the unofficial motto of the United States Marine Corps during World War 2.

It had been picked up by a friend of Alley's, Marine Corps Major Evans Carlson in China.

The major had been impressed with the Gung Ho philosophy and methods.

Alley was highly influential in education and was published widely.

He knew many in the Communist hierarchy personally, including Mao Zedong.

He was an uncritical supporter of the Communist regime and either did not know about or chose not to comment on the millions who perished under Mao.

He returned to New Zealand several times to be feted by the Communist Party of New Zealand (CPNZ), to speak at meetings and to give lectures organised by China-New Zealand friendship societies.

At such times, he was closely watched by the New Zealand Security Intelligence Service.

Its file notes, dated June 26, 1963, register that Alley, a writer and interpreter, born on December 2, 1897 in Springfield, Canterbury, lived at 9 Tai Chi Chang in Peking.

Elsewhere, the files record the activities of his New Zealand visits, the nature of his talks and lectures, and with whom he associated, although most of the latter are deleted from the file.

They also note in a disapproving tone the sometimes uncritical - possibly even Gung Ho? - reception Rewi Alley was accorded by various media reports and interviews in New Zealand during his visits.

As Mr Key says, Alley became a very popular and important figure in China, one of that country's top 10 "foreign friends".

So, in a roundabout way, has become the unreconstructed communist from Canterbury, who, the intelligence files insist, owed his first allegiance to China.

The spooks who sweated over such reports must be turning in their graves.