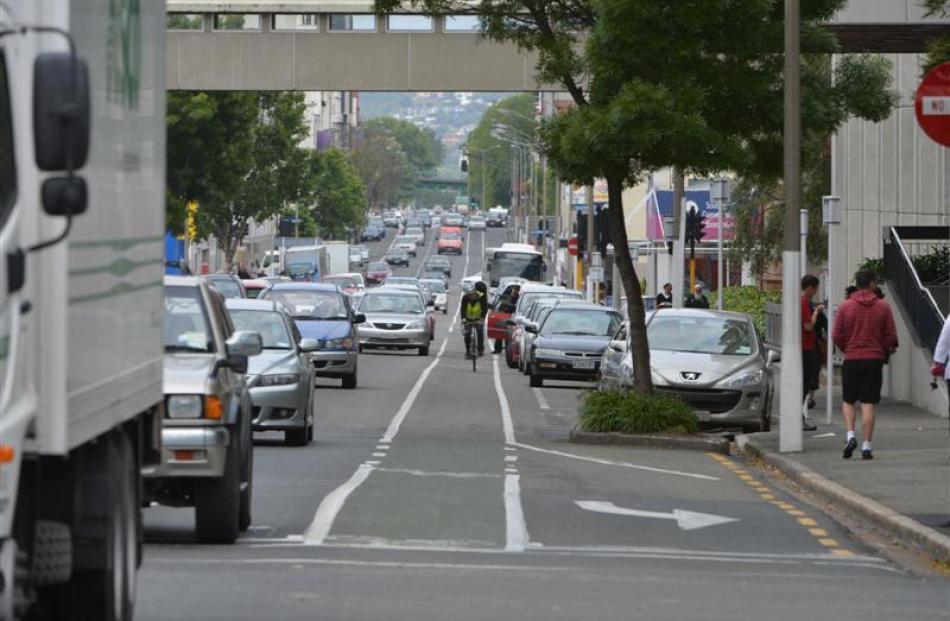 The era of simply painting lanes on busy roads to create pseudo-cycling routes must draw to a close, Hank Weiss, a spokesman for cycling advocacy group Spokes Dunedin, says.

Rider preferences mostly tend to be the safer type of routes.

Of course. But little heeded in Dunedin and elsewhere when it comes to implementing most utilitarian cycle routes on major roads in the past few decades.

While shown to be of substantial overall benefit once health and the environment are taken into account, cycling is still considered by many in the transport field to be a riskier form of movement.

This landmark study says with separate paths, it does not have to be that way.

This elevated risk has developed with time (remember, bicycles came before cars) not because of an inherent danger in the act of riding a bike, but from having built a system that all too often puts cars and cyclists too close together.

By separating vehicle hazards from the cyclist (as we do for pedestrians on footpaths, trains on tracks and aircraft on runways), both motorists and cyclists gain in safety and peace of mind.

The Canadian study highlights the desirability and importance of separated bicycle route infrastructure as a key evidence-based but underused cycle injury prevention strategy.

As the authors point out, once built, the improved cycling infrastructure is available to most people, requires little active effort on the part of cyclists and little or no enforcement action, does not require repeated behavioural reinforcement or have to be very expensive, and is prevention oriented (it works to prevent the crash and injury from occurring): all strong characteristics of a successful injury prevention programme.

So can we justify installing new on-road cycling lanes or maintaining existing lanes that are not protected (buffered or separated)?

The answer is, with the large risk documented in this study, we cannot.

New investment in cycling infrastructure on busy urban streets should be spent on building protected lanes, either on- or off-road.

The era of simply painting lanes on busy roads to create pseudo-cycling routes must now draw to a close.

The task of retrofitting existing unprotected bike lanes on busy roads to what we now know are much safer designs must be begun, and begun quickly.

This does not mean a disadvantage for cars. That discredited meme is merely hype by a tiny minority. Most people simply want more choices within a safer transport system that makes room for everyone.

Cycling as a means of utilitarian transport will take off when people understand you don't have to be an avid cyclist to safely enjoy the many benefits of riding a bike.

This new group of people on bikes will simply be people going to work, school, social events or the market.

This important research, combined with other knowledge, tells us this will happen when, and only when, the routes are safe for and appealing to potential users of all ages, gender and abilities.

But the question remains: Will the planners, engineers and policy makers now starting to implement Dunedin's planned Cycle Network heed the evidence for what it takes to truly make Dunedin a people- and cycle-friendly city?

• Prof Weiss posted this article as a Spokes Dunedin editorial nine days before cyclist Li Hong He was killed in Cumberland St on Monday. The article was accompanied by a photograph of the cycle lane just a block south of where Dr He was run over by a stock truck.

• The Teschke et al study is of cyclist injuries and behaviour in Toronto and Vancouver and is called "Route Infrastructure and the Risk of Injuries to Bicyclists: A Case-Crossover Study".

It was published in the October 2012 issue of the American Journal of Public Health.