'Stoats' in our fresh water 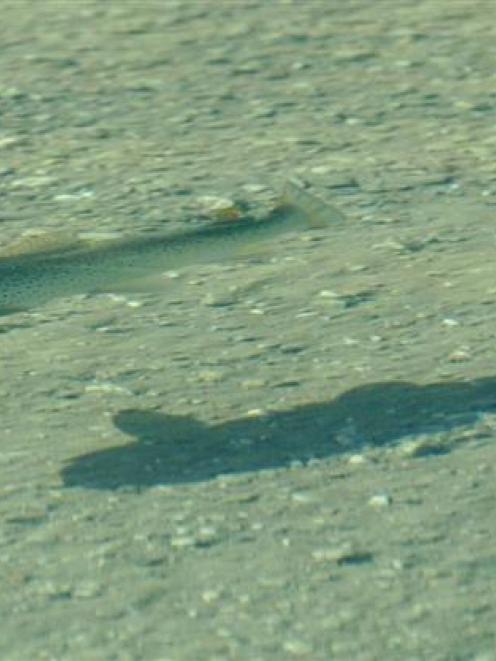 A trout swims above its shadow in the shallows of Lake Wanaka. Photo by Stephen Jaquiery.
Six months ago, farmers were intrigued to hear trout being likened to stoats. This was a main point in a thoughtful and stimulating speech by retiring Federated Farmers Dairy chairman Lachlan McKenzie, who saw trout as killers of New Zealand's freshwater biodiversity.

He reasoned that instead of just criticising farmers for our increasing number of clapped-out rivers and streams, trout should share the blame. The idea was immediately dismissed in the media as utterly ridiculous by several top-ranked freshwater ecologists.

These experts were unanimous, admitting no doubts or uncertainties and, apparently, the topic has not been mentioned since in academic, government, research, conservation or fisheries circles.

Despite this apparent lack of interest, I find Mr McKenzie's claim well worth considering.

While sports fishermen might be complacent at the success of trout over our native fishes, ecologists should have been pondering other aspects of this complex issue and been able to respond sensibly.

Here I show reason to suspect that trout have been hugely detrimental to our waterways; they might even be responsible for their own decline in some waters.

Since freshwater is a life-giving taonga, and because of the current debate over the uses and ownership of water as a mere physical resource, I suggest that science needs to prepare its wider case and be accessible to help pioneer the best possible future for New Zealanders and the New Zealand ecology in managing this most fundamental resource.

The theory behind the "trout as stoats" claim is simple.

Freed from otters, pike and other northern hemisphere aquatic hunters, trout and salmon released into New Zealand streams in the latter part of the 1800s became the dominant top predators by feeding on potential competitors.

The largest of these, the kokopu, is especially vulnerable to trout. Salmonids are efficient opportunistic predators; this gives them priority access to food. So I find it easy to accept Mr McKenzie's claim that only stoats on land are able to match trout for adverse ecological impact.

Albeit coming from a farmer, his is a more useful new idea than any I've come across in decades from fisheries scientists.

Apparently, the natural teamwork of a close-knit ecological community, created over evolutionary time, has been slowly disrupted in our waterways by the misfit alien top predators being too successful.

But in-stream activities are just a part of the overall water cycle.

Quantity, the regulated flow of rain through the land and into marshlands, springs and rivers, first needs to be optimised at the top of the cycle by trees, tussock and wetland plants.

This fundamental pattern is generally ignored or misunderstood by those who unintentionally help to damage it by following inappropriate traditions.

Trampers and fishermen instinctively realise that deathly quiet forests (because of stoats) are unreal, but people today have no similar appreciation of what waterways should be like as fully functional ecosystems.

To our detriment, from farmers to engineers and from bureaucrats to scientists, we mostly think of streams as drains, not habitats.

Over time, we have accepted major losses of flowing-water habitat, and elsewhere the benefits of having trout and salmon for sport and for tourists, without ever asking what the costs might be.

Seemingly, nobody cared about habitat and biodiversity changes. As a result, we have a water-quality problem as well as a water-quantity problem.

But now there is an opportunity to comprehensively debate the issues. Using our waterways for the benefit of all must include understanding the ecology of trout and the species they have largely replaced.

For years, scientists have been reporting that most of our indigenous freshwater fish are in serious decline to the extent that some are endangered and some species are absent from regions they once lived in.

But it is the very fabric of the environment, the land and fresh water, that is becoming ever more dysfunctional. As living habitat, Aotearoa is slowly dying, never faster than now.

The Department of Conservation has long-term studies under way to add to the already copious scientific literature on our freshwater fish, but nothing yet seems to help us understand the overall ecology, not even the feeding preferences of even the larger species.

The readily available texts do not do more than provide unquantified, incomplete lists of prey species - seemingly, all the carnivores feed on all the same things.

New Zealand's unique species are at risk, whereas trout and salmon are not, but all should be managed with the aim of improving the overall ecology of the environment as top priority. That would also be how to best manage the countryside: ecology underpins any economy.

Predation by trout, and stoats, needs to be viewed as a key part of our overall environmental problems, and the consequences need to be factored into the current national debate on fresh water.

Without being able to accept reliable basic science as the starting point, the debate will likely fragment into irreconcilable factions seeking compromises.

It must be realised that an unfocused, unwinnable debate could suit narrowly interested parties who use lobbying and self-interest over reason. Science should not oblige them: it should organise to inform the debate.

• Cedric Woods is the author of Native and Introduced Freshwater Fishes of New Zealand (1963).