Theologian's beliefs have evolved but gratitude to Christian tradition remains 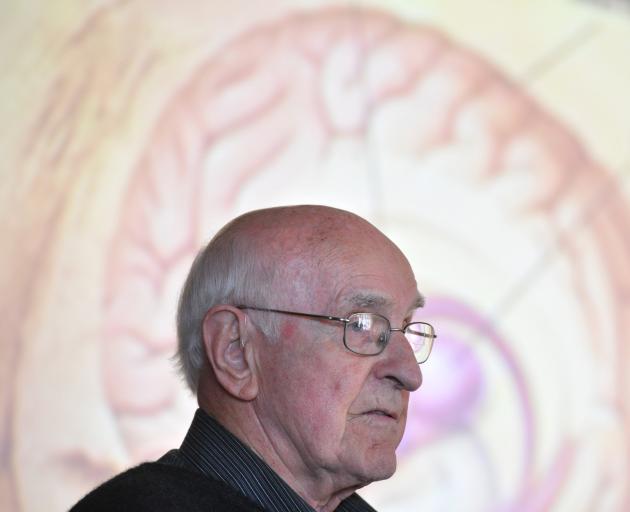 The Rev Prof Sir Lloyd Geering speaking in Dunedin in October 2014. Photo from ODT files.
On his 99th birthday, Sir Lloyd Geering traced how his thinking had changed as he strove to relate Christian thinking and experience to all other knowledge.Ian Harris reports.

THE gift of life is to be celebrated, preferably while we live rather than waiting for others to do it over us when we die. Birthdays are an excellent time for this, an opportunity to reflect on all there is to be thankful for, what life has taught us, how we have changed.

So it was fitting that on February 26, on his 99th birthday, the Rev Prof Sir Lloyd Geering should preach before a packed St Andrew's Presbyterian Church in Wellington on ''How my thinking has changed''.

Sir Lloyd told how it was only in his late teens that he became involved in the church and, at university, the Student Christian Movement.

In his studies at Knox College, the approach to the Bible was liberal. He realised that. far from being a set of unchangeable doctrines, Christian thinking throughout history was ever changing. Theology was affirmed as the intellectual exercise by which Christians think through their experience and relate it to all other knowledge: ''This is what I have tried to do ever since.''

Sir Lloyd moved later to a more radical approach, demythologising stories about Jesus expressed within a framework of mythical thinking, in order to discover their truth for today's non-mythical world.

Later again, evolution became prominent in his thinking. ''Rather than God making the universe,'' he said, ''it was the process of evolution, by eventually bringing forth humans and language, that created such concepts as God.

''My discovery about the priority of language made me realise that we humans do live in two worlds. But they are not the material world and the spiritual worlds our forefathers assumed they lived in. Rather they are the physical world and the world of human thought.''

The human thought-world then becomes the lens through which we see and understand the physical world.

Sir Lloyd focused on three areas to illustrate how his thinking has changed:

•God. Initially, God was for him simply part of the total package of Christian ideas. The word named the mystery of life that could not otherwise be grasped by the human mind.

''More recently I have come to realise that God does not name a cosmic reality at all. It is a humanly created idea in the human thought-world - a word by which we have tried to make sense of the physical world we live in.

''God is an idea that has played an extremely important centring role in our evolving culture. It was the idea of God as creator of the universe that led to the rise of modern science, as medieval theologians tried to discover what they called 'the ways of God' by conducting experiments.

''But also associated with this idea of God were the values of love, compassion, honesty and truth. These make such moral demands of us that they transcend us. And though the idea of God had its beginning in our mythological past, it remains a useful symbol for our highest values. God is love, just as the New Testament asserts.''

•Jesus of Nazareth. ''He is not for me to be worshipped as the divine Son of God, for that sort of language belongs to the world of ancient mythology.'' He was rather a wise man, a sage.

''The original Jesus did not talk much about himself at all, or even about God. Rather he talked about the Kingdom of God, describing this in parables, such as the Good Samaritan and the Prodigal Son. He used this term to describe his vision of how people should live with each other in loving relationships of reciprocal goodwill.

•Mortality. ''We humans are finite, earthly beings, just like all planetary creatures. We are given one life to live, and there is no future existence beyond the grave in some heavenly spiritual realm.''

Summing up, Sir Lloyd said though his thinking had changed markedly since he first embraced the Christian faith, ''at no time have I ever thought it necessary, or even desirable, to reject Christianity, as some atheists delight in doing.

''On the contrary, I remain very grateful to the Christian tradition. From the prophets and apostles of old, and particularly from that remarkable but elusive figure of Jesus of Nazareth, I have learned a lot about how to live life to the full.

''I believe today's secular and humanistic world owes its origin to the Christendom out of which it emerged. And if humankind is to flourish in the future, it needs to acknowledge these spiritual roots and continually learn from them.''

-Ian Harris is a journalist and commentator.