The undead lurks in the freezer 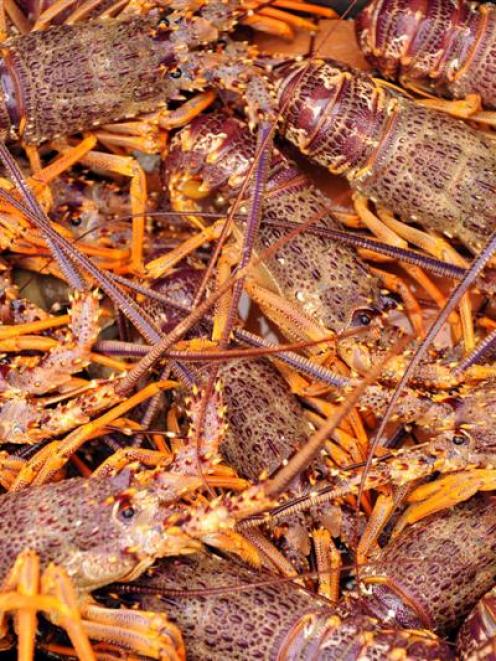 ''There are few scarier things than a crayfish.'' Photo by Stephen Jaquiery.
My brother dropped a crayfish over last Thursday. Dead, I presume.

Certainly, it wasn't moving. And cold to the point where a scientist would argue it was frozen. But possibly still alive.

To deny crayfish the choice of cryogenics is just pescatogyny, and I would never want to be accused of that. I whanged it straight into the freezer.

I know very little about crayfish. I have eaten it at rich people's houses and thought it was yum. But when I go to Den's Takeaways in Mornington, the fish decision is always sole fillet or blue cod. The phrase ''crayfish and one scoop of chips'' has yet to leave my lips.

My brother is a hunter. His life is redolent with magnificent stories of catching wild pigs with his bare hands and ripping them to bits with his teeth so he can give some to his mates. I am not like this. I am urban.

When my brother heard that some recreational fishermen were heading off to Milford to do a crayfish dive and needed a boat boy, he applied for that job. Being a boat boy seemed a bit tame to me, little more surely than untying a rope from one of those big wooden cotton reel things on the wharf and then leaping on board. You could train a hedgehog to do this.

But no, being a boat boy is quite a lot more.

''It's hard finding the bubbles in the water to see where the guys are,'' explained my brother. And then proceeded to tell how the weather that weekend out at sea, out beyond where all the other boats go, was the worst he had even been in. Murderous high waves, thunder and lightning. My brother said he turned to look at the skipper at one stage and the skipper's face was scarlet.

This is boat talk. Scarlet. On land, one's face goes white when the terror hits, but out at sea, apparently, with ferocious northwest currents whipping up the coast, the face, when faced with death, turns scarlet.

My brother's companions shared a lot in common. In days gone by, drink has been consumed copiously, possibly because often, recreational ocean fishermen have headed out to sea because they are having a hard time at home with the wife.

Imagine then the potential disaster of a boat full of men hammered to the gills delivering King Learian rants on the inadequacy of women while 30-foot waves rear as high as the sky and shards of lightning zing off their teeth fillings.

But mercifully, alcohol was absent on this journey. Which is probably why my brother survived to bring me a three-pounder.

The team caught 34. The signs where they were staying said NO FREEZERS but this team didn't bother with signs. Their freezer was the size of a table tennis table. Eventually, fellow guests started complaining about the smell of the fish. It's amazing what some people will complain about.

There are few scarier things than a crayfish. Some of those little insects and spiders can look pretty scary when magnified on a natural history programme - and Judith Collins can send you under a bed with that new face of hers, that false comin'-to-getcha smile - but a crayfish doesn't need to be magnified.

It is big and awful already, like giant mutant weta. Those antennae are surely packed with venom, and anyone who says they are not frightened by a crayfish is just plain lying. The front legs, even of a sleeping frozen crayfish, could de-ball a man in a nanosecond.

I look at my newspaper-wrapped crayfish in the freezer all the time, prodding it with a Brosnan 7 iron as I would a drunk sleeping grandfather on Christmas Day. Its eye follows me around the kitchen, but then again, Mona Lisa's eyes followed me around the Louvre, so moving eyes can still mean not alive.

Is it worth risking your life to catch a cray? Does my brother realise you can buy them online, dead, for $31.90?