Victory in the cause of peace begins in the mind 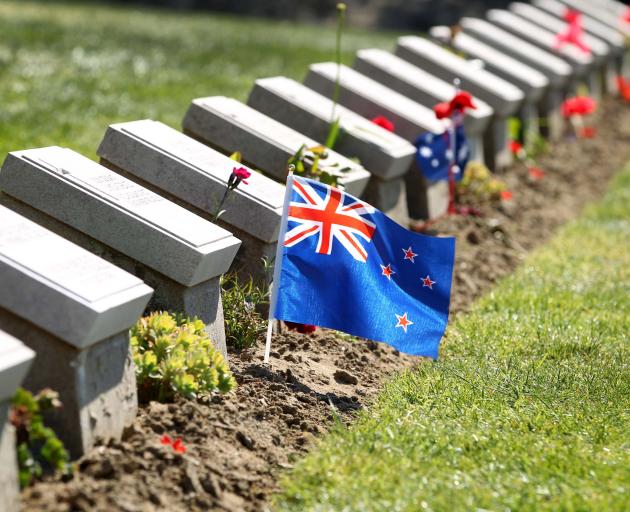 A New Zealand flag flutters among the headstones at Ari Burnu Cemetery on the Gallipoli Peninsula. PHOTO: NZ HERALD
A hundred years on, it's time to lay World War 1 to rest and focus on constructing peace, suggests Ian Harris.

Sunday marks 100 years since the guns of World War 1 fell silent. Scars of the conflict remain in vast cemeteries, the photo albums of countless families and the still-simmering tensions of the new world that lurched out of the wreckage of the old.

In recent years it has been freshly engraved in our consciousness through a steady stream of books, ceremonies, exhibitions, stamps, coins, plays and television programmes.

Now it is surely time to lay that war to rest and refocus our vision and our energy on the subtler challenge of building a truly just and lasting peace.

That won't be easy. Ever since the Gallipoli campaign, New Zealanders have taken great pride in our country's commitment to the ideal of freedom from oppression.

This impelled us to send young men in their thousands to fight and die for king, empire and the ruling classes of the day. They showed incredible devotion and valour.

So did their enemies, Turk and German alike. As each Remembrance and Anzac Day we mourn the fathers, sons and brothers who died in battle, so do they.

But we seldom spare a thought for them or their families, most of them ordinary people just like us, caught up in a conflict far from their making. A hundred years on, perhaps we should.

Also, while we have naturally focused on New Zealand's toll

in the abortive invasion of Turkey, little is heard about

the much greater losses

Those lives matter, too.

Nearly everyone agrees that war is ghastly and dehumanising, but we should recognise that not everyone loses out. In Days of Our Years, Dutch journalist Pierre van Paassen notes that even as the armies were locked in the bloodbath of Flanders, representatives of the German chemical trust, Swiss copper interests and English, German and French armament firms met in Vienna. "Their sole purpose," he says, "was to devise ways and means of keeping the war going profitably".

Such history has lessons for the present, but do we learn? The brutal murder of Saudi journalist Jamal Khashoggi in Istanbul last month revolted the world, but the prospect of profits sways President Trump to go easy on Riyadh. He doesn't want to jeopardise a $US110billion ($NZ162billion) arms deal - think of American profits, think of American jobs ... And think of the populations against whom the arms might one day be used.

Some argue that building these arsenals of mass destruction is the only realistic way to be sure of peace. They also guarantee that somewhere, some day, national leaders can resort to war again.

The industrialists will be happy with that. Moving from fascination with war to a full-on commitment to peace might begin with reflecting on the preamble to Unesco's constitution: "Since wars begin in the minds of men, it is in the minds of men that the defences of peace must be constructed."

Everyone is capable of this change of mindset. It might begin simply by wearing a white poppy for peace alongside the red poppy of remembrance on Anzac Day. After all, the men and women we remember would say they fought to bring peace, so in this way we would honour them, too.

It might mean greater acknowledgment of those who took a principled stand against all war and suffered for it - as, indeed, Dunedin is doing by erecting a memorial to Archibald Baxter. The army sent Baxter to the Belgian front to break him, but he stood firm. No-one should doubt his courage.

We might shift the emphasis from tales of heroism in war to stories of non-violence and heroism - to Te Whiti-o-Rongomai of Parihaka, Mahatma Gandhi in India, Martin Luther King in the US, Nelson Mandela in South Africa. As the poet Milton wrote, "peace hath her victories no less renowned than war".

We might resist resurgent nationalisms by getting in behind organisations that promote peace through greater fairness throughout the world. We might seek to understand how people elsewhere think - not so much to highlight our differences, but to register how much we have in common.

These are realistic ways, open to everyone, of building on the Unesco truth that victory in the cause of peace begins in the minds of men and women, everywhere.

Ian Harris is a journalist and commentator.