Women will create change in the Catholic Church 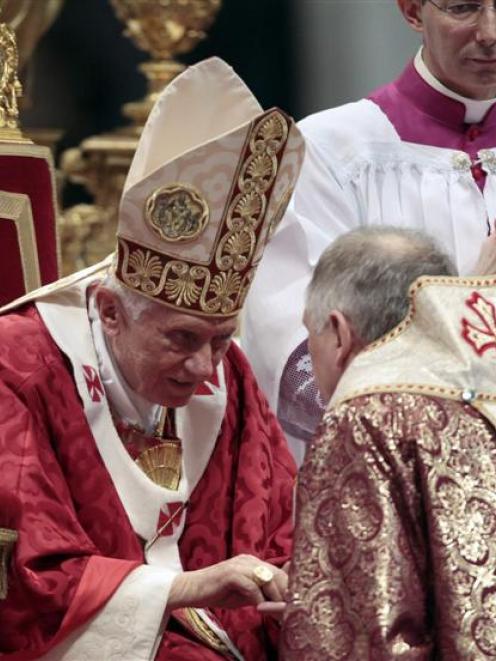 Archbishop of the Byzantine Catholic Archdiocese of Pittsburgh, William Charles Skurla (right) receives the sacred Palladium from Pope Benedict XVI at St Peter's Basilica it the Vatican last month. Photo by Reuters.
If the Catholic Church is ever to fulfil the promise of Vatican II, it will be the women who make it happen, writes Ian Harris.

If your conscience collides with authority, which will win?

If you pledge loyalty to an organisation, institution or country, are you bound to obey whatever the circumstances?

The questions are those of the whistle-blower, the party politician, the conscientious objector - and in the United States today, the Catholic nun.

There, thousands of sisters who vowed obedience to their Church and its hierarchy find certain teachings disturbing, and are resisting attempts to whip them back into line.

This does not amount to a Protestant-style revolt against the authority of Pope and bishops.

But the nuns are certainly stirring the Church in a way that will resonate with Protestants who are aware of their heritage.

The latest tussle between conscience and authority comes as no surprise. Many Catholics in the United States and elsewhere are dismayed that in the decades since 1962-65, when fresh breezes blew through the Second Vatican Council, successive popes have worked steadily to put the liberating genie back in the bottle - and none so diligently as doctrinal enforcer Cardinal Joseph Ratzinger, now Pope Benedict XVI.

So when leading American nuns expressed support for President Obama's broadening of healthcare, thought afresh about homosexuality and the male-only priesthood, and focused on social justice issues, their bishops and the Vatican combined to order them to "get in behind".

In 2010, the bishops opposed health reforms that obliged Catholic hospitals, universities and charities to provide contraceptive coverage free to women employees, Catholic or not. This, they said, was an assault on the Church's ban on contraception and therefore on religious freedom.

A compromise was reached allowing the women to receive that cover direct from the health insurance industry. Sisters of the Leadership Conference of Women Religious, an umbrella organisation representing about 80% of American nuns, found that satisfactory and said so. This angered the bishops, who insisted that no public money should be spent in Church institutions on something they oppose.

Despite the bishops and their teaching, surveys have shown that up to 98% of Catholic women use contraceptives. For them it is a question of conscience and personal responsibility. They do not let the Church get in the way.

In April this year, an inquiry by the Vatican's Congregation for the Doctrine of the Faith determined that the Leadership Conference had serious doctrinal problems. Besides not toeing the line on homosexuality and the priesthood, the nuns were accused of promoting "radical feminist themes incompatible with the Catholic faith". The report said they should not "disagree with or challenge the bishops, who are the Church's authentic teachers of faith and morals".

Also in the firing line is Network, a social justice lobby founded by a group of sisters.

Their error was to put too much emphasis on poverty and economic injustice, while staying silent on abortion and same-sex marriage.

The hierarchy's efforts to rein the nuns in have not gone down well with many Catholics, including priests, who were already perturbed by Rome's tepid response to child sexual abuse on the part of some clergy.

The branding of progressive Catholics as "termites" by the president of the Catholic League did not help.

If Catholic commentators in major newspapers are any guide, however, there is change in the wind.

One excoriates "an out-of-touch, self-consumed hierarchy and its musty orthodoxies".

Noting that American Catholics' views on contraception, abortion and same-sex marriage are much the same as among Americans in general, he says: "These Catholics look to the Church not for exacting rules, but for a locus for their spirituality."

Another columnist commends the breakaway Spiritus Christi Church in Rochester, New York, which describes itself as "Catholic, not Roman Catholic".

The church has a woman pastor and performs same-sex unions.

He advises fellow-Catholics: "If you are not getting the spiritual sustenance you need, if you are uneasy being part of an institution out of step with your conscience - then go."

It seems to me that if the Catholic Church is ever to fulfil the promise of Vatican II, it will be the women who make it happen, both in America and closer to home.

After the April slap-down of the Leadership Conference he wrote: "Those vital nuns are now on the battle line facing this out-of-touch male hierarchy. I predict, however, that the nuns will ultimately prevail."

The Vatican, he added, had never understood either feminine ways of operating, "or that truth cannot be finally trampled in the service of institutional power".