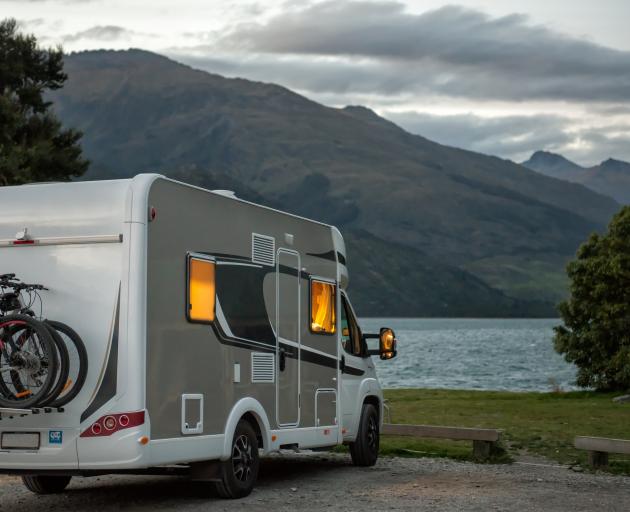 Photo: Getty Images
Responsible camping ambassadors are having a big effect on campers' behaviour and locals' attitudes towards them, authorities in the South's freedom camping hotspots say.

Just a few years ago, some communities felt as if they were under siege.

By 2018 residents of the Queenstown Lakes District were fed up with freedom campers and the local council took the extraordinary step of literally clamping down on errant visitors.

Last summer, more than 1500 fines were handed out and 34 vehicles were clamped.

The council doubled the number of enforcement officers this year but, despite that, the number of fines dished out is down more than 6% on the same time last year.

"My litmus test on this is probably the fact that this summer I have had one complaint from a member of the public about freedom camping. If I go back to when I was first elected I was probably getting half a dozen a day," Boult said.

The introduction of bylaws, the government-funded responsible camping ambassador programme, and the Tiaki Promise had all helped turn things around.

The difference in the attitude of campers, and locals' attitudes towards them, was immeasurable, Boult said.

"Go back to where we were, we had the biggest freedom camping problem in New Zealand," he said.

The district had 16 ambassadors out spreading the message and interacting with campers.

Further north in the Waitaki District, two ambassadors were covering a massive area. But they reported even greater success with no fines issued this summer.

One of the district's responsible camping ambassadors, Marcus Reid, said campers had responded positively to his presence.

"Generally, they're all pretty clued into the freedom camping spots, so they're abiding by that.

"Some of them are a little bit grey ... in regards to having a toilet on board and storage facilities for grey water and whatnot. But when they realise what they're doing, if they're doing anything wrong, they take it all on board and go and camp in the right areas."

The Tiaki Promise, an initiative to help all travellers to New Zealand care for people, place and culture, had resonated with campers - particularly the younger generation, Reid said. Those unaware of the concept were quick to take it on board.

Freedom campers at the Thomas Burns St car park site during the 2018/19 season. PHOTO: ODT FILES
Other troublesome areas in the past, such as the Mackenzie District and Dunedin, had also seen a decrease in freedom camping infringements this summer.

Dunedin City Council parks and recreation group manager Robert West said the introduction of a central city freedom camping site had relieved the stress on the coastal communities of Warrington and Ocean View.

Warrington in particular rallied hard in recent years against being one of only two designated freedom camping areas in the city's limits.

"The intensity of complaints has dropped at Warrington," West said.

"The Waikouaiti Community Board have been very supportive of the centre city trial and I think it's evident to everybody that the volumes of people using the Warrington site have dropped."

While some locals were uncomfortable with a central city carpark being turned into a freedom camping site, the concept had worked, West said.

"It has reduced those numbers at Warrington and Ocean View, so it's had the intended effect."

All authorities agreed the progress on tackling problematic freedom campers was good, but there was a need to carry on the funding in future.

Remember the Freedom Camping Act is "NOT" all about Motor-homes and Caravans who are a minority of those defined as campers by that Act;..
5 Meaning of freedom camp
(1) In this Act, freedom camp means to camp (other than at a camping ground) within 200 m of a motor vehicle accessible area or the mean low-water springs line of any sea or harbour, or on or within 200 m of a formed road or a Great Walks Track, using 1 or more of the following:
(a) a tent or other temporary structure:
(b) a caravan:
(c) a car, campervan, housetruck, or other motor vehicle.
Noting that the requirement is "within 200 metres of a Motor Vehicle accessible area" it does not require a 'formed road' as such many Hunters who take 4x4's and bikes bush are defined as campers as many others.

We do recommend that all Freedom Campers take a look at ours which can be found at www.accreditedcampernz.com

What if people don't require grey water storage tanks etc? We generally don't. - This is one of the failures of the self containment standard, in that it fails to be applicable for everyone as defined by the Freedom Camping Act. ie hunters that take motor bikes or 4x4's bush to their camp sites, River rafters and kayaker's who often will camp river side for a night or 2 or cycle tourists who camp in rural areas. High time Councils woke up to the definition of Freedom Campers as the Act provides for, not the self serving lobbying provided by the Motor-home and Caravan fraternity which ignores everyone else.