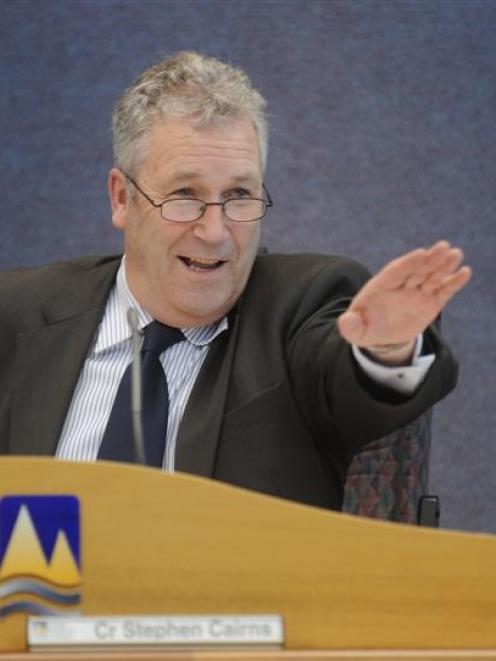 Regional councils have been "in the gun".

People have felt they were "under-achieving and under-performing and wanted the end of them," outgoing Otago Regional Council chairman Stephen Cairns says.

However, he firmly believes regional councils have a future, pointing to this week's release of the Land and Water Forum report as a prime example.

"At the outset, regional councils were clearly and squarely in the gun."

But 12 months later, it had been demonstrated that once people got into water management it became "horribly complicated really quickly" and the solutions were not immediate, he said.

The report showed regional councils would have a big role in making big decisions on water into the future, Mr Cairns, who spent three terms on the council, two as chairman, said.

Most people saw regional councils as "environmental stewards", but it was not that easy to define its role, he said.

"We're creators of economic development, or inhibitors, if we get it wrong."

People did not recognise the council's role in this, because it did not have the visible face of an economic development unit.

"But we're directly involved. If we get it wrong, it could have a major impact on this region."

The council's role in the Glass Earth geophysical aerial survey and its work with communities looking at their bulk water and irrigation options showed its pivotal role, he said.

Then there was Port Otago, 100% owned by the regional council and which returned steadily increasing reserves to the council each year.

"This shows the region is growing reasonably well in terms of exports."

When it came to important decisions affecting the economy of the region, it was the council which would decide whether to merge Port Otago with Lyttelton's port.

The community would be consulted on the merger and, if it was not right for Otago, the council would not agree to do it.

"We do operate under the radar."

That could be an advantage in times of controversy, as the council could take a regional view, Mr Cairns said.

However, the stadium funding debate showed the council was not immune to full public galleries and finger-pointing.

"We have to take a long-term view and be prepared to take the slaps around it, as well.

Regional councils are in a better position to do so, given our councillors are from across Otago."

The stadium issue led to some "pretty hurtful" comments at a time when much was going on behind the scenes.

"There was a lot of rumour.

Some people take some truly preposterous leaps of logic, to make ill-conceived conclusions about one's agenda or motives."

It was fascinating how the stadium issue polarised feelings in Dunedin, yet at a national level it was seen as a positive move for Otago and Dunedin, he said.

"I hardly attend a meeting at all where someone doesn't want to know how it's progressing, yet you can't get the message across that the rest of the country is saying `good on us'."

After nine years on the council, he was still surprised how long it took to make progress.

In the past six years, steady progress had been made in areas such as air quality and the water allocation and quality debate.

"At the beginning, these seemed all-consuming and it was difficult to see the way through them."

But the council "team" had knuckled down and got to work.

"Getting out there and talking to the community, you can make amazing progress."

In Otago, the regional council had begun its quest to clean up waterways, pushing for district and city councils to clean up their sewerage systems, most notably Dunedin City Council's Tahuna upgrade and Project Pure in Wanaka.

It also tackled discharges from factories such as Fonterra's facility at Stirling and the former PPCS in Dunedin and then got tough on dairy farmers' effluent discharges.

"Those would not have happened without a regional council."

Tough issues regarding the flood risk on the Taieri as increasing development and subdivision disrupted flow paths was another problem that would not be solved without the regional council, he said.

He had tried and failed to get the Dunedin City Council, which he firmly believed was the natural home for public transport, to take on the buses.

Other frustrations in his time on the council included the Leith-Lindsay flood protection scheme, which had been through the Environment Court only to more recently get caught by the potential cost of the works and the University of Otago's master plan for the campus.

"It's another bridge to cross. So will be the costings."

Mr Cairns said he had enjoyed 95% of his time on the council, describing it as rewarding, challenging and exciting with "some of it just down right boring, but not much".