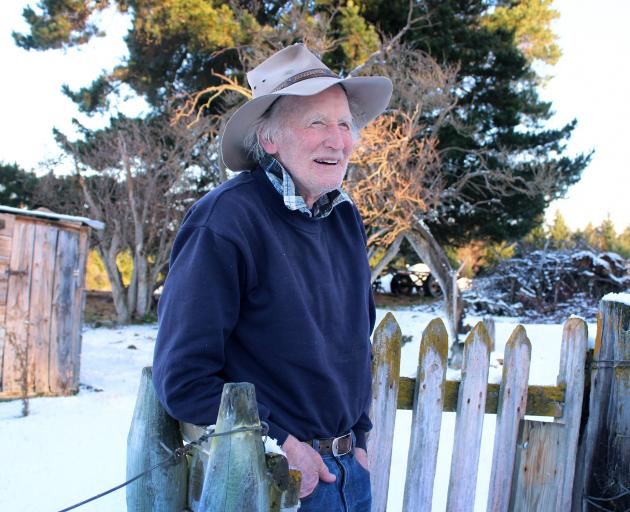 During Naseby’s second snowfall of the year, outside his small wooden house on the outskirts of the town Ross McMillan is dressed in his signature blue jeans and cowboy hat.

"I was born up here and it looks like I’m gonna die here. I’m half mad. What else do you want to know?"

McMillan made his name as a "bush poet", performing his rhyming verse in ballads and songs.

All are about country life, whether it be about the "Publican’s Wife", or one of his many odes to dogs.

"Yep, I was a farmer, but first of all I was a high-country musterer. That was the life. I loved that. Horses and dogs and that."

When Jean Deans Raced The Train is a true story about McMillan’s mother as a young woman, racing the Oamaru postal train on horseback to get letters from her soldier sweetheart Curly Bill during World War 1.

Now McMillan says he has "no mind to write".

"Last night in the pub a lady I’d written one for a while ago said ‘when are you going to write me another one?’ I said I don’t know. I wish I could write like I did.

"I enjoyed it, especially when I was going good. Then it all just got shut out of me. Don’t know why. I suppose I might write again."

Most nights he can be found having a yarn at Naseby’s Ancient Briton Hotel.

When it comes time for the pub’s biannual Bards, Ballads and Bulldust festival, he will recite what he can remember, although his fading eyesight means he can’t read his other works.

"Oh yeah, I get up and say something. A lot of them I put into song and I can remember some of them."

"He was very nervous, but picked up the microphone and gave one of the most amazing readings I’ve ever heard. The crowd loved it and the weekend went from strength to strength."

McMillan is a "student of people", Mr Sullivan says.

"His poems are basically a library of history of the high-country. Whenever the war or his old horse is mentioned he tears up. One of the things I’m most grateful for is meeting him."

The pub will try to hold the poetry and music showcase in September, but there are no firm plans.

McMillan’s style is commonly compared to that of Waltzing Matilda author Banjo Paterson.

"I learned Banjo as a kid and thought he was marvellous. I still do."

As such, he has great affection for Australia.

"I reckon the Aussies are great people, the outback people I mean. I sometimes got carried away and got drunk and would hop on an aeroplane.

"A lot of the Aussies think I’m a great poet, and they send stuff over here."

McMillan wrote a few poems at school, but didn’t really get going until they were published in the Central Otago News when he was in his 30s.

"When I was at school I was just a mongrel. Just a skinny fella. When I started writing for the Alex paper a friend of mine got in touch with my school teacher and said I’d been writing all these great poems, and they couldn’t understand it because I learnt nothing at school."

He doesn’t know why he started.

"I tell people it’s because I had a knock on the head when I was young. Writing them, I was happy as anything."

He says his two main collections are The Country Bloke and The Mountain Man, but throughout the years he released many other smaller titles.

"They are really good. I don’t understand how I wrote them."

McMillan took over the 3000ha sheep and beef farm on which he now lives in 1969,  after his father died.

He now lives there with friend Christine Diack, who helps to take care of him. His son Peter and grandson Jamie run the farm.

Peter says his father loves his horses and his curling.

"I’ve seen him pretty much every day for the last 70 years."

He says he took her  to the North Island for the "magical cure".

"It was bull..., but never mind, you have to try all these things."

After that, he vowed to never marry again.

During sunlight hours these days, McMillan will venture outside to feed his calves and  sheep.

He says he still enjoys the country life his poems portrayed.

The wild merino muster,
Where steep ranges reach on high,
In the jumble and the cluster,
As God carved in ages by,
Though time may dim the lustre,
I still answer to the tie,
Of the old days of the muster,
’Neath the blue Otago Sky