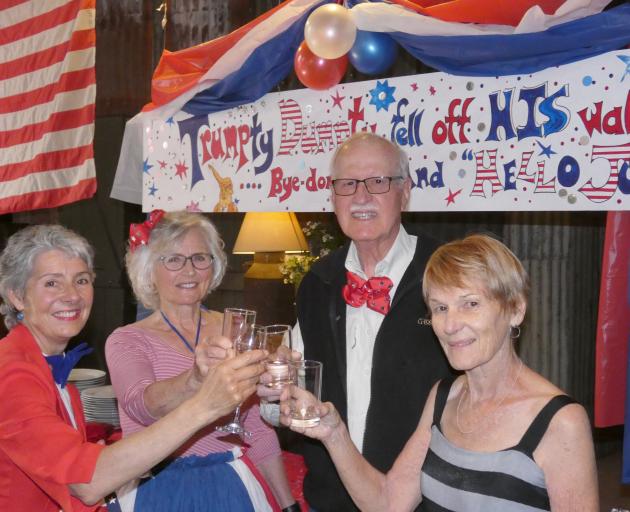 Raising a glass to President Donald Trump’s defeat in the US election are (from left) Suzanne Russell, of Clyde, Marilyn and Timothy Fleming, and Nola Hambleton, all of Alexandra. PHOTO: JARED MORGAN
If US President Donald Trump refuses to concede defeat in the US election, a group in Central Otago is willing to push him along by turning his catchphrase "you’re fired" back on him.

A party dubbed a "rebirth of democracy in America" attracted 60 guests to The Orchard Garden near Alexandra yesterday.

For organisers Timothy and Marilyn Fleming, it was the least they could do.

Mr Fleming, a cardiologist and physician from the Seattle, Washington, area now transplanted to Alexandra, said the party was to review the past four years and celebrate a reset in his homeland.

He had watched the rise and fall of Trump with shock and awe.

"We were devastated a real estate developer and reality TV person would ascend to run the world’s largest economy."

He had hoped the US Congress would keep Trump "in check" but he had been a law unto himself.

Ironically, he believed yesterday’s party might appeal to the incumbent.

"He is a narcissist."

He remained engaged in US politics and was still actively involved as an emeritus professor at Washington State University.

Associate Prof Gerard Wilkins was one his first ports of call, he said.

The Dunedin and Otago Medical School cardiologist put him "to work".

That involved working at Dunedin’s Marinoto Clinic, Dunstan Hospital and with general practitioners in Central Otago.

He and his wife usually returned home in the northern hemisphere summer to see their children and grandchildren, who lived in the Seattle area and the Netherlands, but Covid-19 had put paid to that.

"It is too hard to go and too difficult to come back."

Mr Trump’s reneging on multiple international agreements and his insults directed at the late US senator John McCain and a reporter with disabilities were factors contributing to his political demise but his handling of Covid-19 was a huge reason for his downfall, he said.

"He’s been responsible for innumerable deaths."

He could see why people voted for him, but the pandemic was a game-changer, he said.

"Covid turned the course of the election."