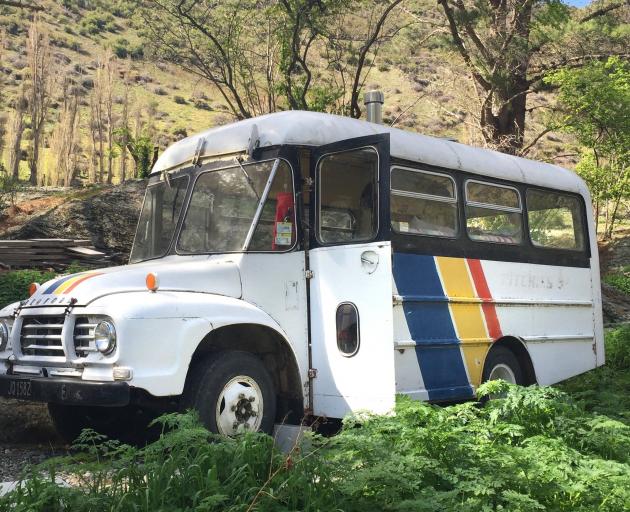 Billy the Bus as it looked when it first arrived on owner Judy Cockeram’s Kawarau Gorge section in September 2016.PHOTO: SUPPLIED
Billy the bus has been found, but its owner’s anguish continues.

The bus, owned by Judy Cockeram of Cromwell, has been located in the paddock of a property in Southland.

Mrs Cockeram was inconsolable when the 1962 Bedford J2 bus was stolen from her property in the Kawarau Gorge in March.

The Cromwell artist had used the bus as a peaceful retreat, installing a stove and creating a deck around it as well as housing some of her pottery.

Mrs Cockeram was contacted about two weeks ago by a member of the public who passed on a photo of the bus.

There was evidence of some activity around the bus, with other cars parked nearby, she said.

At first she was "very excited" that the bus had been found and she passed on the information to police via the 105 non-emergency reporting system.

A policeman visited the site about 10 days ago and phoned her while standing near the bus so she could verify unique features to confirm it was her bus.

But since then Mrs Cockeram has been frustrated by a lack of progress.

Despite knowing exactly where the bus was located she had not heard if any approach had been made to the owners of the paddock.

"Things have still not happened and I am at a loss at what to do.

"Goodness knows what state the bus will be in if it ever does come back."

A friend had driven by the site and reported that the stove chimney had been ripped off the bus, and it had been repainted a mint green colour.

Mrs Cockeram feared at any moment "a match will be thrown into it and I will get a burnt-out hulk".

Some people would indeed steal the eye out of a needle....
Mrs Cockeram is right to be worried about the well known penchant of NZers to put a match to anything in any way controversial; the police should impound Billy--now.

Idk, if it had a stove and a deck around it, how was it even drive-able? Regardless, I hope she gets it back intact, and the perps are charged.