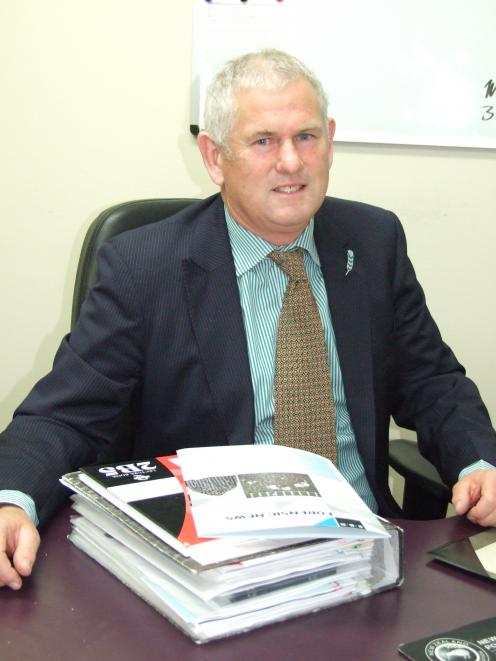 Back working in Alexandra, Detective Sergeant Derek Shaw says it was humbling for Operation Concord to gain international recognition for its efforts. Photo: Lynda van Kempen.
One of the biggest police operations in recent times was sparked by a blackmailer who threatened to spike infant milk formula with 1080 poison. Two southern officers were in the 35-strong team which brought the offender before the court and the team’s effort was recognised internationally this week. Detective Sergeant Derek Shaw tells Lynda van Kempen about being part of such a massive investigation.

It was like looking for a needle in a haystack "and we weren’t even sure we were even in the right haystack", Derek Shaw says.

He was describing the daunting task ahead of the Operation Concord team, which was set up in response to a blackmail threat that had national and international consequences.

A 35-strong police team, based at Otahuhu, began the painstaking process of filtering through the list of 2600 "people of interest".

The Alexandra-based detective was enjoying a weekend in Christchurch at a rugby reunion in February last year when he got the call-up.

"I got a phone call saying are you available to go to Auckland for an unknown job —  of national significance —  for two weeks? I was a bit intrigued because the Cricket World Cup was on and automatically assumed that Isis was massing off the Manukau Heads and we were going to save the world ...  I didn’t know what the job was. It was all in strictest secrecy."

"I duly got on the plane to Auckland with my overnight bag and came back to Alex eight months later, essentially."

The scale was immense and it took a while to get used to such a vast operation.

As well as the police team in Auckland, other police teams and people from the Ministry for Primary Industries and the Institute of Environmental Science and Research were involved.

"It was very much a New Zealand incorporated investigation because the threat was national, to public health and to our trade and commerce."

It was quite a contrast to his usual working day.

"Since 2003, I’ve been working by myself, or in a small three-man CIB team here, and then I was pitched into the vast machine that was Operation Concord, so it was a bit of a shock."

He and Detective Constable Andre De Villiers, of Gore, were the only Otago-Southland representatives on the investigation. Det Sgt Shaw was on the general squad, which focused on narrowing down the people of interest.

"Not suspects per se but people that may become suspects and in the end there were 2600 of them. We had to filter through them and consider each one and also to develop methods to handle that many people of interest. The model we came up with, ultimately in hindsight, proved to work well, and our final offender was within our target group. "

"But I have to say that 95% of the anti-1080 group were just genuine good New Zealanders that were taking a well thought-out position on an issue and were following their passion.

"I’ve got a new respect for the anti-1080 community because of their genuineness and their honesty and their passion. I haven’t got an opinion one way or the other [about 1080] but for them, I can see that on the whole they’re not some kind of terrorist group or anything like that and were good to deal with."

The scope of the investigation was wide-ranging.

"We became subject matter experts on the postal system, the 1080 supply chain from manufacture to end user and on the financial history of the suspect."

"The announcement about the threat was made and within that day we were having to deal with hundreds of suspect cans of milk powder, possibly contaminated with 1080 poison.

"Then we also had to, unfortunately, scrutinise every baby death in the country, every case of sudden infant death syndrome, which is already an absolute tragedy, to consider whether maybe contaminated milk powder had played a part in those."

"He, unwittingly made initial contact with the suspect and then just followed his nose a wee bit after that, to the extent to cause the suspect enough discomfort for him to send a ‘retraction’ letter to Andre in Gore."

It was that letter that proved the undoing of offender Jeremy Kerr, as DNA on the letter was tested and matched to him.

Kerr was on the "people of interest" list and had earlier been interviewed by Det Const De Villiers and provided DNA.

"I was lucky enough to get the phone call from the ESR to say they’d had a DNA hit," Det Sgt Shaw said.

"I was within earshot of another detective and I had to repeat it to her and then it took a couple of minutes to realise that we actually had a DNA hit for, firstly, a person that was within our top 200 suspects or persons of interest, and then, secondly, that the circumstances fitted, we had it. We had the pleasure of ringing the boss to let him know."

"It was a buzz to get that news and be able to pass it on to the bosses, but then there was still three months’ work from that date until termination and arrest date, just to eliminate any other possibilities and to build such a comprehensive case."

Living away from his partner and family was one of the down sides to being on the case.

Although he managed to return home regularly, his partner had to hold the fort at home and transport their three children, then aged 12, 11 and 10, to various activities.

Also, the CIB team in Alexandra had to manage without a third of their staff for eight months.

"The up side was working on a well-resourced, well-supported, well-led team operation. The machine was enormous and to see it, when it was up and running, and to see the systems, some we’d developed, it was very much like a combine harvester, really taking an immense amount of material in and then sorting it and ultimately coming up with Jeremy Kerr as an offender."

It was a highlight of his 37 years of policing, Det Sgt Shaw said.

● Operation Concord was announced this week as the second runner-up in the IACP/Thomson Reuters Award for Excellence in Criminal Investigations at the International Association of Chiefs of Police Awards in the United States.

Fifty-three entries were received from all around the world.

• Blackmail involved highly concentrated amounts of 1080 mixed with baby milk formula, posted to Fonterra and Federated Farmers with a demand the country stop using 1080 by a certain date or poison-spiked milk powder would be released into the Chinese market and another unspecified market.

• Jeremy Hamish Kerr pleaded guilty and was jailed for eight and a-half years on two counts of blackmail, March 23, this year.

• Cost to the country estimated at between $30million and $40million, court told.