Clyde's crossroads set-up is an accident waiting to happen 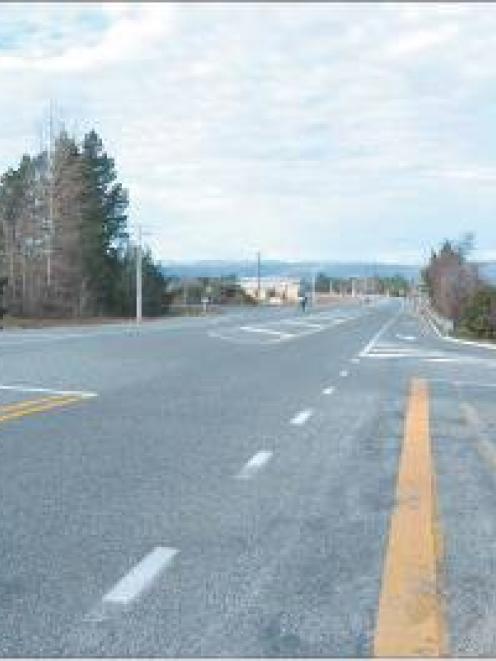 Enough room? Cyclist Lynne Stewart would like to see more space on the road for traffic turning into Hazlett St, Clyde (at right of photo) from State Highway 8. At busy times, traffic travelling along the highway and vehicles turning on to the highway from Springvale Rd (intersection at left) compound the problem, she says.
Cyclists turning into Clyde's Hazlett St from State Highway 8 are risking their lives, says a frequent user of the road, who describes the intersection as ‘‘just crazy".


Lynne Stewart, who was employed as the Central Otago and Queenstown Lakes road safety co-ordinator for almost seven years until 2000, said the intersection was poorly designed and dangerous for cyclists like herself.

There was no room for cyclists to complete the turning manoeuvre safely if the road was busy, she said.

‘‘There's not enough space for a cyclist to turn if cars travelling in opposite directions are both turning into Hazlett St,'' Ms Stewart said.

The left-turning lane into Hazlett St was narrow and had to be shared by cyclists and motorists. Springvale Rd also intersected with the highway nearby, which compounded the problem, and traffic was able to travel at 100kmh.

‘‘I've had a few close calls there and been pushed into the crash barrier [beside the left-hand turn into Hazlett St]. I honestly believe it's only a matter of time before there's a serious accident there involving a cyclist,'' she said.

‘‘The intersection is just crazy, and if even one cyclist is injured because of it, that's too many.''

‘‘If anyone has safety concerns, we'd like to hear about them. We're certainly a lot more mindful these days of cyclists using the roads,'' Mr Clarke said.

Clyde School principal Doug White said the school community hoped a planned underpass beneath the highway, linking the end of the Otago Central Rail Trail with Clyde township, would resolve any concerns about the safety of cyclists in that area.

The underpass would be south of the Hazlett St and Springvale Rd intersections.

The Regional Land Transport Committee had recommended funding be allocated for the cycle and pedestrian underpass, but the final decision still rested with Land Transport New Zealand.

‘‘Parents of our school pupils have told us they completely avoid letting their children cycle across the highway,'' Mr White said.

Ms Stewart believed an underpass was not the solution to her concerns and would like to see the road markings altered at the intersection, giving more space for traffic turning into Clyde at Hazlett St.

‘‘After all, cycling is a legitimate form of transport and there's more and more of us on bikes these days.
‘‘The increasing cost of fuel is prompting more cyclists to head out on the roads.''

She cycled to work every day, travelling from her Earnscleugh home through Clyde and along Springvale Rd.

Although there was a cycle lane on the highway between Alexandra and Clyde, that lane finished near the Sunderland St, Clyde, intersection.

One road safety catchphrase often adorning billboards these days was ‘‘Share the road''.

‘‘That's what I want to see, cyclists and motorists sharing the road, so that it's safe for cyclists too,'' she said.