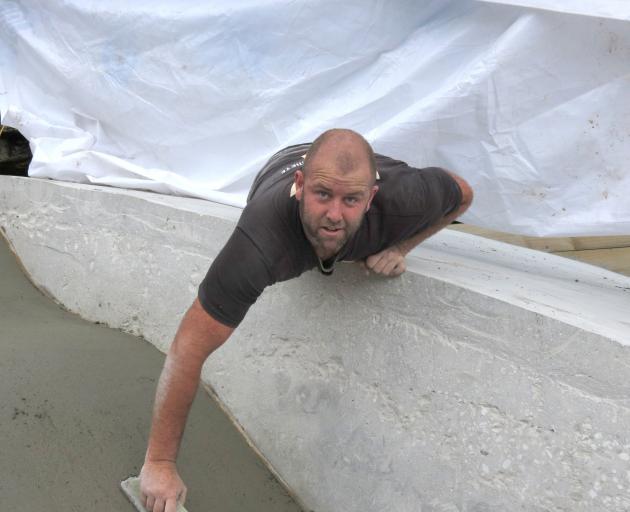 Flat Line Concrete director Sharn Stewart smooths off a ramp at Roxburgh’s skate park. PHOTO: JARED MORGAN
The wheels are back on at the Roxburgh skate park after some Shortland Street-style drama.

Completion of the 200sqm park is now set to coincide with the end of the school term after Wanaka company Flat Line Concrete stepped into the role to keep the project rolling.

Roxburgh Excavation managing director Robin Fox said her company held the overall contract for the $160,000 project behind the King George V Memorial Park, from the top of the rise into the old tennis courts.

The company had engaged Canterbury company Civil Concrete Ltd to complete the concreting and the elements such as pipes and ramps for the park.

Civil Concrete was chosen because it had been contracted by the Queenstown Lakes District Council to work on the expansion of the Wanaka skate park.

The company went into liquidation between being subcontracted and work beginning.

"When they arrived on site we had three weeks of Shortland Street-style dramas among their crew with the company going into liquidation," Ms Fox said.

This led to ripping out some of the ramps and features and finding a new contractor under urgency as it was a "community project".

"Flat Line came to the rescue."

She said the cost to Roxburgh Excavation was "substantial".

"They were great, when something that happens you need to give the person time to fix it and once they knew they [Civil Concrete] weren’t coming back, those Wanaka guys [Flat Line Concrete] came in quickly."

Flat Line Concrete director Sharn Stewart said picking up the pieces was something his company was happy to do for the Roxburgh community.

"Basically we’ve just come down [from Wanaka to Roxburgh] and we’re pretty much only covering costs."

He said the pouring of concrete the final section of the skate park, a pyramid-style ramp in the centre, would take place on November 29, weather-dependent.