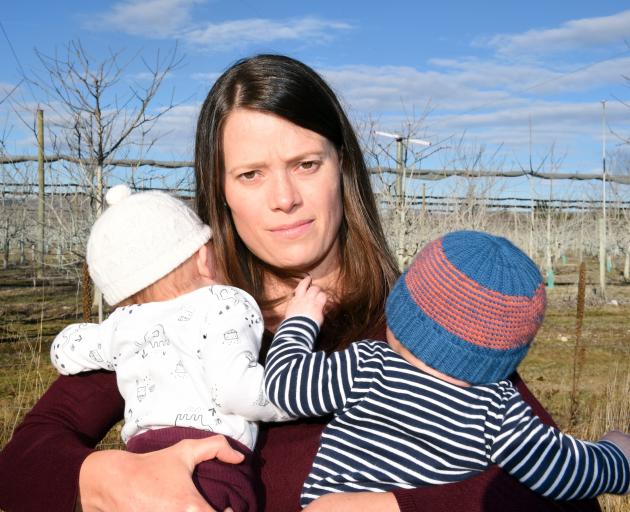 Katie Hill and her 4-month-old twins Chloe (left) and Zacon the boundary of her property near a noisy frost-fighting turbine. Photo: Gregor Richardson
Noise measurements from a frost-fighting turbine that is 100m from a family's home show Central Otago District Council rules about the turbines are "the real problem", the family says.

Katie and Hunter Hill, and various other Lett's Gully residents, have complained to the council repeatedly about the noise from turbines on nearby Leaning Rock Cherries Ltd orchards.

Noise measurements were taken recently of a turbine 100m from the Hills' house, at their request.

The results were within the council rules and therefore showed the turbine was operating legally, council planning manager David Campbell said.

But Mrs Hill said the council rules were confusing and not strict enough.

"That's what we've been trying to tell them [the council] all along, that the regulations need changing as the noise allowance is far too high, particularly with regard to what the World Health Organisation [WHO] recommends," Mrs Hill said.

Mrs Hill said the noise from the turbine 100m from their home was "unbearable" and sounded like helicopters above their house.

She said it was also not known if the turbine 100m from their home was operating at full speed when it was measured.

Mr Campbell said he did not know the margin of error for noise measurements.

He said the council had requested the noise measurements be taken again, and when other turbines were also operating, and would make sure the turbines were operating at full speed when measured.

The measurements would be done by a specialist. Their timing was to be confirmed.

Leaning Rock manager Pete Bennie declined to comment on the measurements, saying "Leaning Rock Cherries does not intend to enter into any further dialogue via the media.

"Leaning Rock Cherries welcome any neighbours meet with us to discuss their concerns or suggestions".

- Noise levels 300m from a frost­fighting turbine must be at or below 65dB L10 (the level which is equalled or exceeded 10% over the time period measured).
- Turbines may be built as close as 300m from a residential or rural settlement resource area, but as close as 100m from a house within a rural or rural residential zone.
- No specification for level of noise allowed 100m from a turbine.
The measurements
- Measurements taken recently for a turbine 100m from the Hill family home in Lett’s Gully Rd, near Alexandra, showed the noise levels at their home when the turbine was on were at or above 69.9 decibels L10, and averaged 66.7 decibels Leq (average sound level over the same measurement period).
- The noise measured 300m from the turbine was at or above 61.7 decibels L10 and 58.6 decibels Leq.

If the people who signed off these rules had to live their own lives by them operating in close proximity, what a wonderful world we would then have.