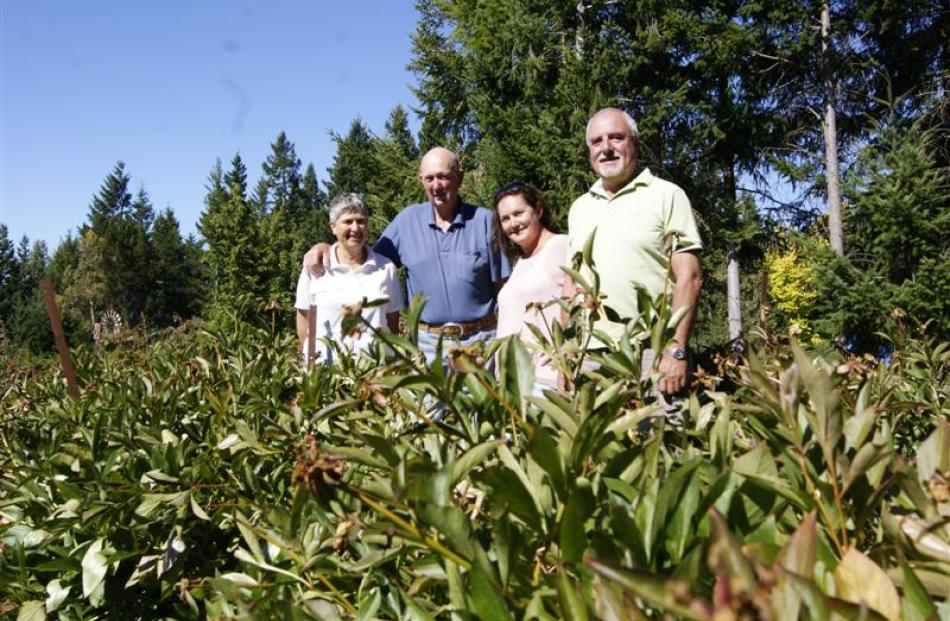 Growing peonies can be a hard business, especially come harvest time, but Jill (left) and John Smith and Jacqui and John Crawford say the social aspect makes up for it. Photo by Sarah Marquet. 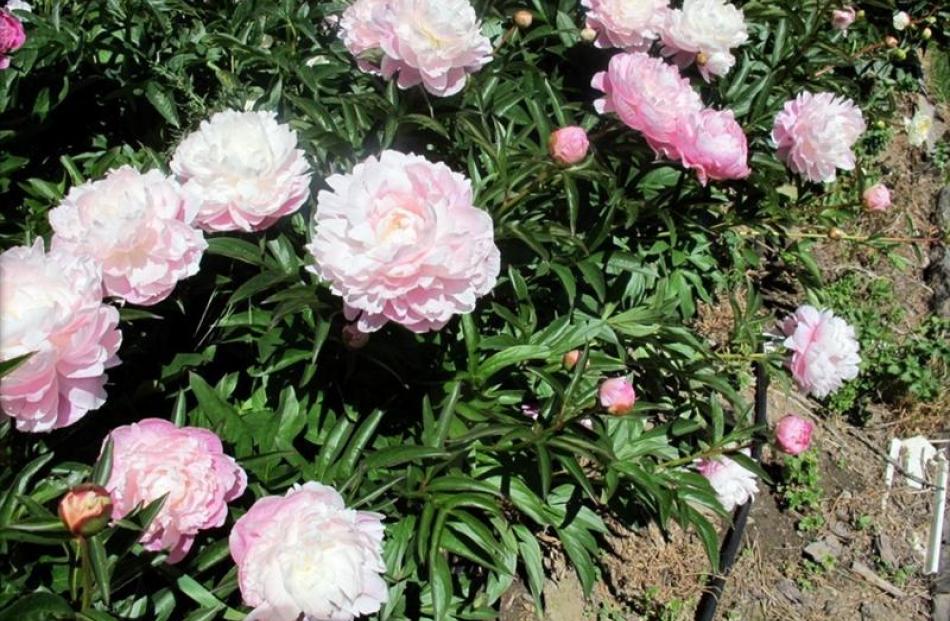 A Naseby couple on the verge of retirement have started a niche peony-growing business, spotting an international demand. Alexandra reporter Sarah Marquet finds out about Altitude Peonies.

''We had a paddock with nothing in it except an occasional horse and thought we might as well grow peonies,'' Jill Smith says.

While she makes it sound like a simple decision, Mrs Smith and husband John did a lot of research and talked to other growers before deciding the Naseby climate was just right for peonies.

They planted their first peony plants in 2000 and were joined by John and Jacqui Crawford, of Dunedin, nine years later.

''We blame the Smiths - they got us into it,'' Mr Crawford said.

''We bought a crib up here and it started off as somewhere to come for a relaxing holiday. Then we met these guys.

''I think the line that sold us was `six weeks a year and that's all it takes'.''

Their blooms have since appeared at some rather high-profile events. Five hundred Coral Sunsets to a recent A-list Hollywood wedding; more corals to a Milan fashion show; reds to a sheik's wedding; Bowl of Creams to the White House, and pinks and whites to former United Kingdom prime minister Tony Blair - that is only some of the places their flowers have gone and often they do not find out where the blooms are headed until after the event.

Sometimes, their Auckland-based exporter cannot or will not give specific details, such as whose Hollywood wedding it was. Often, all they get told is someone from the United States wants 2000 whites, for example.

Getting their flowers to the intended market is a hard task, especially as there is no longer a refrigerated transport option servicing the Maniototo, they say.

When that service ceased about three years ago, they invested in their own refrigerated truck to get their flowers to Dunedin airport.

It takes five and a-half hours to get the flowers from their Naseby packing shed to Dunedin, on to a plane and to their exporter in Auckland. Their season usually starts in the last week of November and 12-hour days are common for them.

Mr Smith describes it as a fine art - each flower has to be picked at just the right moment to ensure it gets to its intended market in the right condition. In the heat of a Naseby summer, a flower can go from fabulous to failure in a mere 10 minutes.

They are all picked as tight buds, but each variety differs slightly.

Some feel like marshmallows when they are perfect to pick. Others, are just learned by experience, and some in the team are better at it than others, the two couples say.

Mr Smith, for example, is ''the master of picking Duchess'' and with Bowl of Cream, he can just look at it and tell it is ready, Mrs Crawford said.

Each of their plants, the Smiths' 4000 and the Crawfords' about 3500, will create about 10 flowers, but only three or four can be picked or the plant would probably die.

At a top price of $4 per stem, as received last season, it is easy to see how it would be hard not to pick more. High compliance costs, especially to get flowers into the United States, and the need to transport flowers to Auckland erodes some of that profit, however.

They would not share just how much they make in a season but say they cannot accept less than $1.60 per stem.

The ''severe climate'' of Naseby, they say, provides the perfect growing conditions for peonies.

''It's perfect, 'cause we almost get a permafrost over winter and then a hot summer,'' Mrs Crawford said.

That special climate means they are the last growers in the country to pick their blooms, later even than Invercargill growers, and provides them with the niche market they need to keep the business going.

Mr Crawford said the season usually starts in October, in Nelson and Marlborough, then moves like a wave down the country.

''And so the Christmas market is all ours.

If the Smiths and the Crawfords are lucky, they can hit both the Thanksgiving and Christmas markets in the United States.

Though harvest time may be hard work, they say it is also a social time, and that is why they are still in the business.

''The pick is the social time of the year,'' Mr Smith said.

• Appear in Greek mythology - Paeon healed Hades, god of the underworld, with peony roots after he was wounded by Heracles. He was a student of Asclepius, the Greek god of medicine and healing, until Asclepius became jealous of him. Zeus saved him from the wrath of Asclepius by turning him into the peony flower.

• The plant has been used in Ancient Greek and Roman, European middle age and Asian medicine.

• Is a traditional floral symbol of China, where it is called the mudan, fuguihua or huawang and is known as the flower of riches and honour or the king of the flowers.

• Chinese legend says it was a stubborn, rebellious flower and was the only one that refused to bloom in winter, going against the instruction of the eccentric Empress Wu Zetian of the Tang dynasty. As punishment, she banished it from the imperial gardens and ordered all the peonies of the capital city to be destroyed.

• Peonies also appear in Japanese culture, where they are called botan and known as king of flowers or prime minister of flowers.

• They also feature in Japanese tattoos.