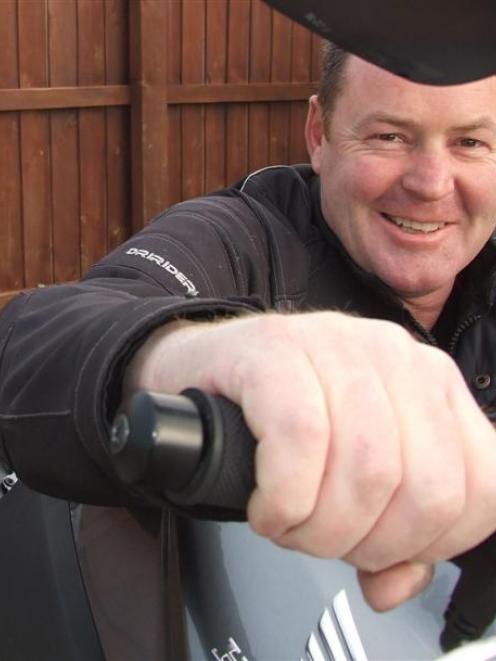 Wanaka Motorcycle Club member Mark Dick does not want the predicted snow to cast a chill over a first big outing on his "brand new" Honda CB1000R Predator to the Brass Monkey Rally on Saturday, so he opted for a heating upgrade. Fellow club member and Wanaka electrician Brendon Voyce installed an adjustable handgrip warming system yesterday. Photo by Catherine Pattiison.
Large groups of motorcyclists will don warm jackets and start riding to Central Otago today and tomorrow for the 29th annual Otago Motorcycle Club Brass Monkey Rally at Oturehua.

Property owner Ken Gillespie said registration numbers were on a par with previous years, and a crowd of between 1800 and 2200 was expected, depending on weather.

Mr Gillespie said the weekend forecast was "not flash", with a possibility of snow, although he did not think that would be a cause for concern.

"It's not too serious. People come to the rally expecting cold weather and a bit of a challenge, but I always hope for clear, dry conditions because some of the big road bikes don't like snow," he said.

The rally site at Oturehua was initially chosen for its extremes of climate.

Site conditions were good, because the ground had "dried out beautifully" after recent rain, Mr Gillespie said.

Most people travelled to the site on Saturday morning, leaving again on Sunday, he said.

Organisers worked closely with local police to ensure road safety, and after almost 30 years, a proven formula was in place, he said.

"We've generally got a good rapport with police. There's always six or eight of them who set up road blocks either side of the rally."

Safety warnings were issued to all those attending, highlighting restrictions on open drum fires, including a ban on the use of fire accelerants.

The Otago Motorcycle Club organises the rally, with help from local organisations, including the Oturehua Winter Sports Club, which supplies food for the event.

This year, bike enthusiasts will compete within ten categories for motorcycles.

Live music and entertainment, including motocross jumping, is also on offer throughout the event.