Father and son given bravery awards 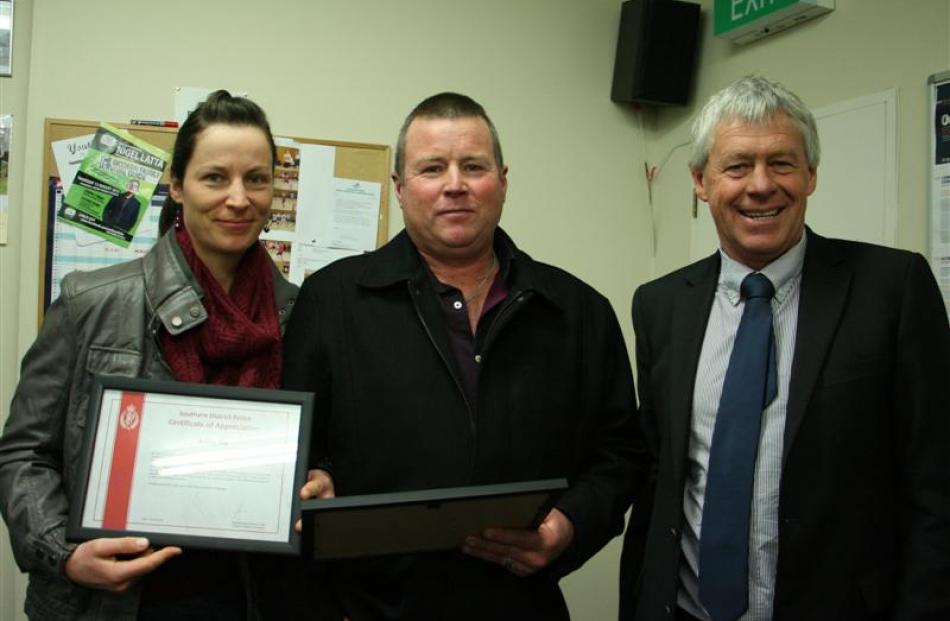 Veronika and Mark Sim were presented with a police certificate of appreciation by Central Otago mayor Tony Lepper yesterday. Mrs Sim accepted their son's award on his behalf. Photo by Liam Cavanagh.

A Roxburgh man and his son have been recognised for their bravery by police after saving a man who fell from his kayak into the Clutha River below Roxburgh Dam.

Father and son Mark and Ashley Sim (19) were honoured at the Central Otago Police Awards ceremony in Alexandra yesterday for their actions in saving the man who had fallen while trying to cross the Clutha.

Insp Jensen said it was a ''quite a special'' ceremony which recognised the work of the ''two people who have assisted in saving someone's life''.

Speaking after the ceremony, Mr Sim said the rescue happened on the night of April 5.

Someone came knocking on Mr Sim's house door wanting to know if he had a boat, and within 10 minutes he had launched his boat into the river, Mr Sim said.

After searching in the dark for about 10 minutes, they eventually found the man, who was in his 50s.

The man, who was wearing a ''Norse jersey, jeans and gumboots'', was clinging to an old fallen tree while holding on to his kayak in the river's ''swift'' current, Mr Sim said.

The pair ''hauled him up'' on to the boat, and secured the kayak.

The man, from Invercargill, was staying at a caravan park, with his wife, who had raised the alarm.

Mr Sim, an orchard manager, said he and his son were proud to be recognised for the award but there were ''a lot of other people out there doing a lot more''.

When asked what was going through his mind at the time, he said he was focused on finding the man and did not think twice about doing it.

Senior Sergeant Ian Kerrisk said it was a case of the ''right people on the spot at the right time with access to a boat''.

Emergency services were responding but without the Sims' quick action, it could have been a very different outcome, he said.

Senior Constables Doug Winter and Lance Davies both received a long service medal for 14 years of service, and Detective Derek Miller was awarded for his promotion to Detective Sergeant.